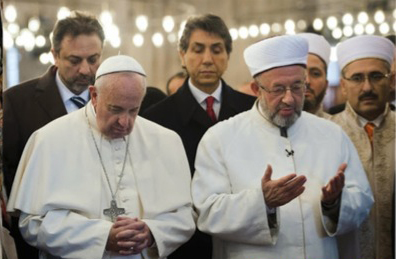 “The Koran is a book of peace. It is a prophetic book of peace,” the pope said, United Press International reported.

However, Paddy Agnew of the Irish Times, faithful to journalistic professionalism, cited the complete quote from Pope Francis, which shows that he did not say what the UPI claimed he said:

He began, however, by condemning anti-Islamic prejudice: “Faced with these (fundamentalist Islamic) terrorist acts . . . people react badly, saying if this is Islam, then I will get angry. That way, lots of Muslims feel offended and they have to point out, ‘but that is not us, the Koran is a prophetic book of peace, this (terrorism) has nothing to do with Islam’.

PUBLIC APOLOGIES TO THE POPE

Br. Alexis Bugnolo of From the Rome Blog wishes to publicly apologize to the Pope, for having previously trusted UPI and thought badly of him. He also asks pardon from Catholics the world over for running a story without checking the sources; most of which report the quote faultily, but one of which reported the full context.  UPI has done a great disservice to the truth, and we Catholics should demand a formal public apology from UPI.

You can send your comments to the UPI’s editorial staff here: http://about.upi.com/contact/editorial