Feast of Santa Lucia, Rome, Dec. 13, 2014:  The crux of the scandal surrounding “Team Bergoglio” — Dr. Austen Ivereigh’s nickname for the group of Cardinals who canvassed for votes on behalf of Cardinal Jorge Mario Bergoglio before and during the Conclave of 2013 — is, without doubt, the curious denials of the testimony Ivereigh gives in his book, The Great Reformer: Francis and the Making of a Radical Pope.

These curious denials are what sparked the interest of the Catholic world.  And their inconsistencies have fueled, not quieted, the speculation, since they are widely seen not as transparent statements, but as politically motivated misinformation.

The From Rome blog, however, mindful of the duty of objectivity, in all of its reporting regarding “Team Bergoglio” has taken as an a priori presumption, that neither Dr. Ivereigh nor those alleged to be part of “Team Bergoglio” are not telling the truth.  For that reason, to round out our coverage, the From Rome blog will now put to scrutiny what these denials say and do not say, so as to weigh their probity.

The denial of Ivereigh given by Cardinal Murphy-O’Connor 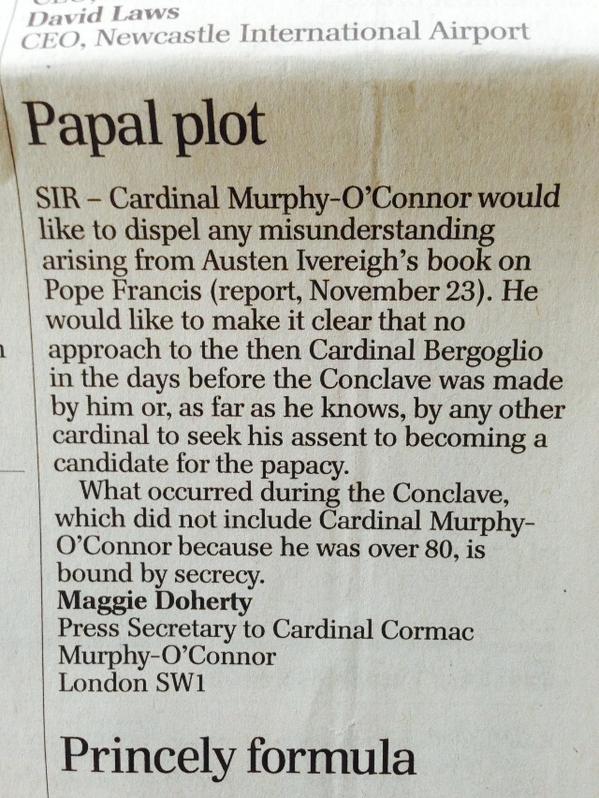 The first official denial of Dr. Ivereigh’s narrative came from Maggie Doherty, the spokeswoman for the retired Cardinal-Archbishop of Westminster, England:  his Eminence Msgr. Cormac Murphy-O’Connor.  That denial, published in the form of a letter to the editor of the Monday Daily Telegraph, on November 25, 2014, can be seen to the right (Note that the Telegraph’s editors have added the lead-title, “Papal plot”).

As the From Rome blog demonstrated yesterday, the most probable reason for the denial, as given, was to specifically negate the allegation of Dr. Ivereigh’s book, on p. 355, which said that the members of “Team Bergoglio”, first of all, sought the agreement of Cardinal Bergoglio to their vote-canvassing campaign.

This is because in  Catholic Church law (Codex iuris canonicis of 1983),  canon 1329 extends punishment for all acts criminalized with excommunication, to all accomplices of those acts, without which the criminalized act or acts could not be accomplished.

Consenting to a vote-canvassing campaign on one’s behalf is the most culpable act which an accomplice can make in it, since without such consent, the campaigners would never have reasonably considered to have undertaken such a campaign.

Canvassing for votes is specifically criminalized by the Papal Law, Universi Dominici Gregis, (here after UDG), of Pope John Paul II, published in 1996, as this blog has explained in detail in its article, “The Great Reformer”.

The improbity of the First Denial

Let’s, presume, as stated, that the letter by Maggie Doherty is true in everything it says. We know from Dr. Ivereigh’s twitter feed, that he regards the statement of Maggie Doherty as emanating from Cardinal Murphy-O’Connor. In our previous report, Ivereigh + UDG 81 = A Radical Problem for the Pope, the From Rome blog speculated on the form and occasion and method of this denial. Now, let us consider it from another point of view: what it says and does not say, and whether the Cardinal could reasonably be considered to have given a testimony which has forensic value.

First of all, one must recognize that in denying the narrative presented in Dr. Ivereigh’s book there are several great problems: the first of which is that Dr. Ivereigh is the former personal secretary to Cardinal Murphy-O’Connor, and if Ivereigh knew anything about the campaign in 2013, the public will presume that he had all this information either from the Cardinal or had it as confirmed by the Cardinal.  So in a sense, the Cardinal will appear to many to be denying himself.

Second, one can only give testimony to what one has seen or heard or did.

Third, one denies only what one denies. And when accused of many things, all which has not been denied, is implicitly or tacitly affirmed.

So, let’s examine the text of the Cardinal’s denial.  In the first sentence, he states that he is not denying what Ivereigh wrote, only aiming at dispelling any misunderstanding that might arise from reading Dr. Ivereigh’s book.  This initial statement greatly weakens the Cardinal’s statement: in a word, he denies nothing of the narrative presented, neither as regards names mentioned or as regards the chronology of events or the acts participated in.  He does not even deny the conversation which Dr. Ivereigh attributes to him, in asking Cardinal Bergoglio for his consent to the campaign.

In the second sentence he denies that he, or as far as he knows the other Cardinals, made any approach to Cardinal Bergoglio to seek his assent as a candidate.  In this statement, the opposite error occurs, for unlike the first in which he denies nothing and concedes all, in this statement he denies too much.  It would have been sufficient to deny with greater precision, but to deny that Cardinal Bergoglio was never asked by any Cardinal regarding his willingness to serve is beyond belief. And since “assent” regards an act of the mind, “consent” to that of the will, and since it is consent that makes one an accomplice, the Cardinal may be saying that he did not seek Cardinal Bergoglio’s assent, but did seek his consent.

Finally, the Cardinal can only deny what he knows: hence, since he cannot possibly know everything which every other of the named Cardinals did or said, his denial in that regard has no forensic value, except to exculpate himself in a conspiracy with Cardinals regarding seeking such a consent.  He has not denied that bishops, priests, deacons, laymen or religious or even journalists were used as intermediaries to obtain such consent.

What is the truth? Until the Cardinal is questioned by journalists or fellow Cardinals in consistory, we may never know.  But it appears from the second sentence that the Cardinal has affirmed that the campaign was a vote-canvassing / vote-promissing endeavor, because in denying too much in the second sentence, he implicitly affirms Ivereigh’s allegation as to the nature of the campaign.

For these reasons, assuming everything the Cardinal said is true, then one seems constrained to conclude that the Cardinal has denied nothing, but confirmed everything. And this is where the improbity arises, because a denial should deny specifics and the totality of an accusation.  One can understand, however, that the Cardinal, being a man of God from his earliest days, would never deny what was true, directly speaking, for that would be dishonest.

The denial given by the Four Cardinals through Fr. Lombardi

The improbity of the Second Denial

In the first part of Fr. Frederico Lombardi’s official denial, he casts a net about too little: because he denies only the activity of 4 Cardinals, when, as this blog has shown, the text itself names 7 and 2 other suspected accomplices, and implicates as many as 30 in the crimes of vote-asking / vote-promising.  Therefore, his statement must be understood, authentically, of not regarding the activities of these others Cardinals, nor of any intermediaries they might have used, nor any other details of Ivereigh’s account.

Furthermore, Cardinal Bergoglio did not have to be asked to give his consent; it is sufficient that he gave it spontaneously, willingly and with knowledge of the nature of the campaign, which nature and its existence none of the Cardinals have denied.

For this reason, this second denial also has great improbity, because it has the form of a denial, but when reasonable interpreted according to the above stated method, it can be considered to be a confession.  For, when accused, the accused must rebut the nature of the crime and the acts committed, if he disputes one or the other or both.

In conclusion, it appears from both denials, that these four of the seven members alleged to be part of “Team Bergoglio” are in fact affirming all which is necessary to indict Cardinal Bergoglio for the crime of being an accomplice in the vote-canvassing campaign. They also leave open the possibility that Cardinal Bergoglio, himself, was the ringleader or initiator, though no one has accused Pope Francis of this.

4 thoughts on “The improbity of Team Bergoglio’s Recent Denials”