Rome, January 21, 2015:  Nearly four years ago, while I lived as a hermit in the Roman Catholic Diocese of Noto, Sicily, I heard of other hermits living on the Island of Sicily, and sought them out for spiritual advice.  In the course of my travels I met a few such hermits, living in obscurity in the mountains of Sicily, and had the occasion to come to know of a vision which the Lord gave one hermit.  At that time, since I do not value private revelations that much, and because I did not know whether this vision was from God or not, I did not put much value in it.  But since that time I have come to see, with the passing events of time, that it was a prophetic vision of the doom into which the Church of Rome would fall.  For that reason, I now recognize it as of God, and for that reason I will publish it here, below.

But since many do not understand why the Lord, at times, threatens the members of His own Church with chastisement, let us first hear what St. Alphonsus dei Liguori, the Doctor of the Church, says on this matter, in his short treatise, entitled, Calamities, Chastisement, and the Love of God, in the first discourse:

CALAMATIES, CHASTISEMENT & THE LOVE OF GOD

“Ah, I will comfort Myself over My adversaries: and I will be revenged of My enemies.” Isaias 1.24.

SUCH is the language of God, when speaking of punishment and vengeance: He says that he is constrained by his justice to take vengeance on his enemies. But, mark you, he begins with the word Heu, “Ah”: this word is an exclamation of grief by which he would give us to understand, that if he were capable of weeping when about to punish, he would weep bitterly at being compelled to afflict us his creatures, whom he has loved so dearly as to give up his life through love for us. “‘Alas!'” says Cornelius a Lapide, “is uttered by one who is lamenting and not insulting; God signifies by this word that he is grieving, and that he is unwilling to punish sinners.”1 No, this God, who is the Father of mercies, and so much loves us, is not of a disposition to punish and afflict, but rather to pardon and console us. For I know the thoughts that I think towards you, says the Lord, thoughts of peace, and not of affliction.2

But some one will say, since such is his character, why does he now punish us? or, at least, appear as if he meant to punish us? Why so? Because he wishes to be merciful towards us: this anger which he now dis- plays is all mercy and patience.

Let us then, my brethren, understand how the Lord at present appears in wrath, not with a view to our punishment, but in order that we may cleanse ourselves of our sins, and thus enable him to pardon us. Such is the subject of our discourse: GOD THREATENS TO CHASTISE IN ORDER TO DELIVER US FROM CHASTISEMENT.

The threats of men ordinarily proceed from their pride and weakness; and so, if they have it in their power to take vengeance, then they will not threaten anything, lest they should thereby give their enemies an opportunity of escape. It is only when they lack the power to inflict their vengeance that they resort to using threats, in order to gratify their passion, by awakening at least the fears of their enemies. Not so the threats of which God makes use; on the contrary, their nature is quite different. His threats do not arise from his inability to chastise, because he can be avenged when he wills; but he bears with us in order to see us repentant, and thus exempt from punishment. You have mercy upon all, because You can do all things, and overlook the sins of men so that they may repent.1 Neither does he threaten from hatred, in order to tor ment us with fear; God threatens from love, in order that we may be converted to him, and thereby escape chastisement: he threatens, because he does not wish to see us lost: he threatens, in sum, because he loves our souls. But You spare all, because they are yours, O Lord, who love souls.2 He threatens; but in spite of this he bears with us and delays in punishing, because he wishes to see us converted, not lost. He deals patiently for your sake, not willing that any should perish, but that all should return to penance.3 Thus the threats of God are all acts of tenderness, and loving calls of his goodness, by which he means to save us from the punishment which we deserve.

And now, here is what this Sicilian hermit told me he saw:* 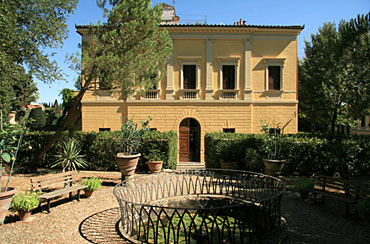 A beautiful house with a fence and garden: and in it there dwelt a most beautiful, immaculate virgin with her spouse.  Then came the day, when her spouse had to go on a long trip, and he left her at home to wait for him. At first, she waited with great fidelity, inside her house, and did not go out; but, as she allowed her impatience to overcome her, she started to look outside through her windows, to see if her spouse was returning; then, moved by greater impatience, she fell into imprudence, and she open the door and looked out on occasion for his return.  Moved by greater impatience and imprudence, and tinged now with the movement of curiosity, she would leave the door open for long hours, and occasionally go out into the yard of the home, to walk along its fence, and look out for her spouse.  But therein she was deceived, because her curiosity betrayed itself to vanity, and she began to take pleasure in going outside her house and spending time in her yard; and then, in looking beyond its fence, ostensibly to see if her spouse was returning, but more and more to enjoy what she saw there.

Then, one day an evil man dressed in the manner of a man of virtue came down the road, and caught her eye. She violated her marriage promise with her own spouse by delaying outside to speak with him. His speech was very pleasing and he praised her with many false words, seducing her with the appearance of virtue, so she betrayed her spouse by allowing this stranger into her house, where shutting the door, she fornicated with him.  He lived with her some time and squandered all the riches of her home on a life of impurity with her, until he died and she died. And that house fell into darkness and great was its ruin …

These are not the exact words, but rather my own attempt to remember what he told me and repeat it succinctly.

This vision is a warning from the Lord, our God; prophetic in the sense that it spoke of what had not yet come to pass, but what would come to pass if men did not repent.

The virgin is the Church of Rome, or rather, the Cardinals of the Holy Roman Church; the house is the Diocese of Rome.  Who the seducer is, is now obvious to everyone in the world.

* Here, I add the photo only for the sake of illustration. I heard of this vision in April of 2011, when I traveled to western Sicily to visit various hermits. For the hermit’s sake, I will not identify the hermit. Nor was I told the full import of the vision.