Rome, February 8, 2015:  His Eminence Raymon Leo Cardinal Burke in an interview with France2 television, published on the web yesterday, has affirmed that he will keep the Catholic Faith even to the point of resisting Pope Francis, if need be.

First, the video feed from France TV Info, can be viewed through this link: 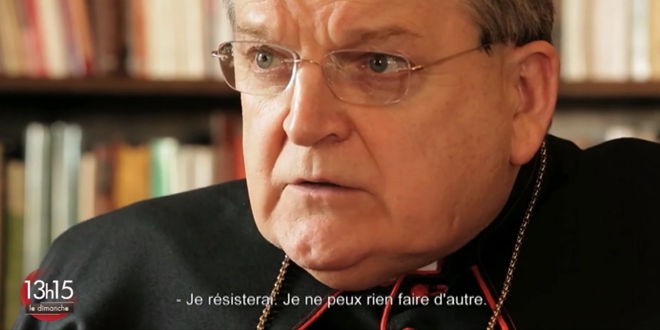 Here is our English translation of the key sections of the interview, where Cardinal Burke responds to the interviewer’s summation of the apparent efforts of the Pope to allow communion for the divorced and the new acceptance of homosexuality characterized by the “who am I to judge” maxim.

France2:  If the pope persists in this direction, what will you do?

Cardinal Burke:  I shall resist, I can do no other.  There’s no doubt that we are in difficult times, this, is clear; it is clear.

France 2: Is this upsetting?

France 2: Is this worrisome?

France 2:  According to you, is the Church threatened as an institution?

Cardinal Burke:The Lord has assured us, as He has assured St. Peter in the Gospel, that the forces of Evil shall not prevail: Non praevalebunt, as we say in Latin.  They shall not have victory over the Church.

With these few words Cardinal Burke has confirmed the entire Church in the Eternal Faith which comes from the lips of Christ.

With these few words, His Eminence has vindicated tens of thousands of clergy, religious and laymen and woman who have rejected the Kasperian thesis of allowing Eucharistic communion to those not morally in communion with Christ.

Let us pray for him! and Let us offer all our prayers and sacrifices that other Cardinals, Bishops, priests, deacons, religious and laymen and woman shall now join him in resisting the heretical proposals which have been indicated, promoted, pushed and advocated since March 13, 2013.

We join with Cardinal Burke, and say, “If the pope persists, we too shall resist!”

*** The Book, every Faithful Catholic Priest will treasure in this time of Crisis  ***

7 thoughts on “Cardinal Burke: if the Pope persists in this path, “I shall resist, I can do no other!””