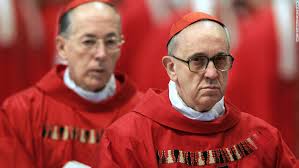 Rome, May 22, 2015:  The interpretation of St. John the Apostle’s Book of the Apocalypse is the most difficult of all the books of the Bible, precisely because it is a prophetic book which speaks in symbolic language of the things which are to come.

Of the Antichrist the Fathers of the Church have spoken much, and speculated much.  They concur that he will be a real human person, a man, whose mother will be of the race of Abraham, Isaac and Jacob, and whose father will be a Catholic Bishop.

But of the false prophet, they have not said much.

From the Scripture, we can readily see however, that the false prophet is one who will easily deceive even the elect, speaking as he does in sweet and convincing ways.

But above all, the False Prophet will be the man who succeeds in getting nearly the entire world to agree with him, expressly or implicitly by their silence.

We have no way of knowing with certainty if we are at the end of the world or not. But we do know that it is a mortal sin for any Catholic to be silent when the truth of the Faith or the integrity of the Church is attacked or sullied.

Cardinal Bergoglio, has without a doubt, proved to be the man whose duplicity, deceits, maneuvering, errors and outright heresies and blasphemies deserve to be denounced from every pulpit, in every Catholic Monastery, Convent, and home.

The silence of so many proves that they are sinning gravely against their duty to be faithful to Christ.

The silence of so many Bishops proves that they are not worthy of their office.

The silence of so many Cardinals proves that they love themselves more than Jesus Christ.

Many are meriting eternal damnation by their silence, just as they will in the days of the False Prophet, whensoever be the days of his coming.

This day, then, choose life or death; speak the truth and denounce the errors and the man, or remain silent and merit eternal Hell fire.  It’s your choice.