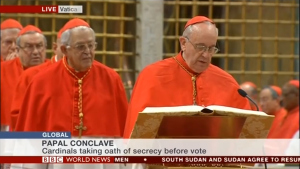 Rome, October 1, 2015 A.D:  Following the revelations, reported by noted Vaticanistas, Edward Pentin and Marco Tosatti, that Cardinal Danneels, in his new biography, admits that a group of Cardinals, in direct violation of the Papal Law, for Papal Elections, Universi Dominici Gregis, organized in 1996 a group which is named, the “Club of St. Gallen” — so called, after the town in Switzerland where it met, and which group Cardinal Danneels called, a “mafiaclub” — formed for the purpose of radically changing the Church and the Catholic Religion, and in recent years formally committed to the promotion of the election of Cardinal Jorge Bergolgio as the next pope:  a series of commentators, notably “Msgr. Athanasius” at the Remnant and Canon Peters have alleged that the penalties of UDG 81, namely, excommunication latae sententiae, on all who violate the proper proceedures of papal elections by canvassing for votes or vote promissing, are not applicable or if they are do not touch upon the validity of the papal election of 2013.

You need to read Latin to read the Law

When the Pope or some competent authority by a specific act declares the penalty upon an individual, the excommunication is declared.

But some special laws can impose an excommunication in virtue of the very deed committed, ipso facto. These impositions by special law for all who in the future commit such actions are true impositions, as the Latin language indicates by the use of the verbs, incurrere, irrogare and innodare.

We see this in the Code itself, which specifies in the Official English translation:

This becomes evident in the Latin text of that canon, which reads:

In Latin, Irrogari means “to inflict” or “impose”, incurrere means to run into or upon; innodare, beings to be bound up by.  The metaphors are equivalent, for when one has been penalized for a crime, he has has its penalty bound to himself and has run into or been tied up by the penalty.  Ferendae sententiae means a punishment which “is to be placed” upon the criminal, latae sententiae means a punishment which “has been placed” upon the criminal.  Thus, it is evident that in cases of excommunications which are latae sententiae ipso facto, the penalty has already been imposed.

Now in the case of the actions prohibited by UDG 81, Pope John Paul II uses very specific language in the original Latin.  As I wrote back on Nov. 28, 2014, but which seems to have been forgotten by the recent commentators:

Let’s take a look, then, at the Latin original, to understand better how, not just any specific form of vote canvassing is a crime according to the Pope who “brought down the Wall”:

The official English translation from the Vatican Website, renders this text, thus:

81. The Cardinal electors shall further abstain from any form of pact, agreement, promise or other commitment of any kind which could oblige them to give or deny their vote to a person or persons. If this were in fact done, even under oath, I decree that such a commitment shall be null and void and that no one shall be bound to observe it; and I hereby impose the penalty of excommunication latae sententiae upon those who violate this prohibition. It is not my intention however to forbid, during the period in which the See is vacant, the exchange of views concerning the election.

81. Let the Cardinal electors, moreover, abstain from all pacts, agreements, promises and any other obligations you like, by which they might be constrained to give or refuse support (suffragium) for anyone (sing. & plural).  All of which, if these were to occur, even when with a foreswearing, We decree are null and void, and none of them are to be held by any obligation of observance; those acting against (this), We now, hereby, bind up with the punishment of excommunication latae sententiae.  Yet, We do not understand to be forbidden, that they communicate with one another concerning the election, during the time of the Sedevacante.

As can be seen, Pope John Paul II, at that moment IMPOSES the penalty of excommunication ipso facto, and this, not upon the act but upon all the persons who will commit the act.  Thus all who commit the forbidden acts are excommunicated automatically for having committed them and the penalty is imposed not by a written decree after the fact, but by a written decree before the fact, that is, by this his special law for Papal Conclaves, Universi Dominici Gregis (UDG).

Indeed, as logic dictates, that if this were not the correct reading of the law, then the threat of an excommunication in UDG 81 would be nothing but a flourish of words, since it would have no effect and the guilty could get away with stealing a papal election by means of vote canvassing.  Clearly Pope John Paul II was not an idiot, who merely threatened a penalty which could only be imposed after the fact by the very individual elected uncanonically by the criminal violators of UDG 81!  To say such a thing would be an absurdity and calumny.

The Myths used to undermine a right understanding of the Law

Canon Peters, for his part, attempts a subtle shell game by replacing the word “imposed” by “formal”, when he writes (I quote from Fr. Z’s blog):

But that same cursory glance at Canon 1331 will not show (unless one is trained in canon law) that most consequences of excommunication become relevant in the external forum only if the excommunication is “imposed or declared”. That short, technical phrase means that, while one who is “automatically” excommunicated labors under the personal burdens of this sanction, it is only when an excommunication is “formal” that actions performed by canonical criminals raise questions for Church life and governance.

As I have shown, the penalty for violation of UDG 81 is already imposed by the promulgation of the papal law itself, on all future violators.  Thus the consequences of that penalty effect not only the liceity but the validity in law of all acts of those persons after the crimes committed. There is no distinction made in canon 1314 of formal and material excommunication. Canon Peters is attempting to alter the law by altering the terms, in a clever shell game.

Msgr. Athanasius, instead, attempts to argue, that since the former papal law explicitly allowed excommunicated electors to vote and be elected, the new papal law, while not explicitly saying such a thing — which is nonsensical in the new Code, if you think about it, since the new Code does not have the distinction between excommunication simplex and excommunication vitandis (simple excommunication of penalty and excommunion which excludes from the Church) — should be read and interpreted as if it did say such a thing.  Msgr.’s opinion is rejected by the noted Canonist, Jesus Minambres, which I reported upon here. The erroneous opinion of the Msgr., is also obviated by the careful consideration of what the new papal law does allow, the voting and election of all Cardinals, regardless of any reason or cause. Because in the CIC 1983, canon 171 prohibits not the voting of excommunicated electors, but the tallying of their votes.  Furthermore, since the College of Cardinals did prohibit de facto the Cardinal of Scotland from attending, because of the scandals he was involved in,  it is clear that their own understanding of whom the Papal Law allows to be prohibited from voting does not correspond to the wide reading the Mgsr. would have it read. Thus since neither the indulgence of UDG 81 can be said to cover excommunication, as the old law did, and since canon 171 does not conflict with it if it did, the argument of Msgr. Athanasius falls flat on its face as contra ius and praeter rem.

For more on the effects of being formally excommunicated (canon 1331) by the violation of UDG 81, see my article of Dec. 12, 2014 A.D., The Monstrosity of the Allegations against “Team Bergoglio” = Cardinal Bergoglio is not the Pope.

New entries are now required to our Chronology of Reports regarding Team Bergoglio:

September 24, 2015:  Renowned Vaticanista,  Edward Pentin, via his blog on NCR,  publishes an article entitled, “Cardinal Danneels Admits to Being Part of a ‘Mafia’ Club opposed to Benedict XVI”, which reveals the decade long conspiracy, which was known as “the Club of St.  Gallen“, to elect Bergoglio so as to radically change the Catholic Church.  This is confirmation of the violation of UDG 81.

September 24, 2015:  Renowned Vaticanista, Marco Tosatti confirms, via his blog, that in a new biography, Cardinal Danneels admits to being part of a “mafiaclub” working to get Bergoglio elected, years before 2013.