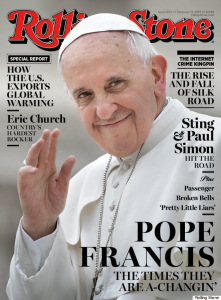 Rome, April 9, 2016 A.D:  The universal scandal given by and contained in the new Papal Post-Synodal Exhortation on the Family, Amoris Laetitia, cannot be tolerated in silence. It must be denounced.  Numerous commentators throughout the world and Church have pointed out how it is fundamentally and diametrically opposed to the teaching of Christ, the Apostles and Apostolic Tradition on the matter of the discipline of the Sacraments and the nature and discernment of the gravity of sin.

What many have not noticed is that the entire argument advanced in Amoris Laetitia presupposes that Ecclesiastical Tradition is merely a human hand-me-down, left over from a darker more puritanical age, and that it does not come from Christ nor was it faithful to the Apostolic Preaching.

For this reason, one must say with many others that this document is in toto, heretical. That is represents, from even a brief study of the history of the Pontificate of Cardinal Bergoglio, a manifest and pertinacious attack upon the Church and denial of revealed truths.

It is exceedingly pertinacious, since the Pope received the corrections of numbers of theologians formally and informally, yet still published it.

On account of the universal scandal given by it, on account of its universal reception by the press as signifying the abandonment of Scripture and Tradition as the remote Rule of Faith in the Church; inasmuch as it is recognized by all and the author itself to contain novel doctrines, which contradict the past ones and past pastoral practice, every Catholic is obliged to REJECT and CONDEMN it AND DISREGARD the authority the author pretends to exercise in it.

Furthermore, the document Amoris Laetitia in itself is sufficient canonical evidence for the Cardinals of the Roman Church, the clergy of Rome and the bishops of the Catholic Church to now issue the first public rebuke to Francis, pointing out that unless he rescind or repudiate the document, that he has ipso facto lost his office on account of formal manifest pertinacious heresy.

If he does not, they must warn him 2x more, and if he still does not change, they must convene a Synod and declare him self-deposed.

Finally, it is obvious on account of the gravest moral obligation of charity for the whole Church, that these three groups are obliged to act, and that if they do not act, each of them individually merits ETERNAL DAMNATION for having loved themselves more than Christ and His Church.

In the coming day and weeks, we shall see which of these cleaves to Christ and which deny him by an effeminate silence.

7 thoughts on “This ‘Amoris Laetitia’ cannot be tolerated in silence”