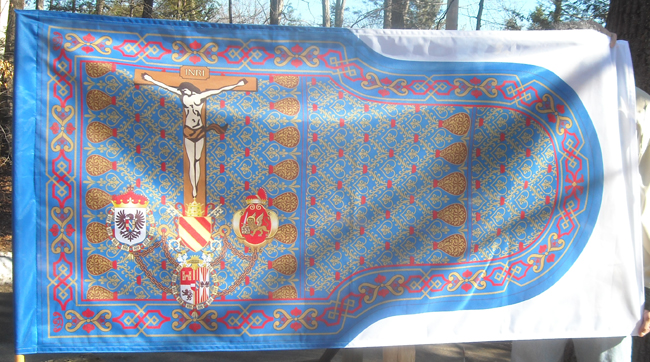 is now available for the first time from Ordo Militaris Inc..  Shown above is the prototype, printed on high tensile nylon and with a sewn sleeve on the left for mounting on any pole during processions.

The reproduction available from Ordo Militaris Inc. will be slightly different:  It will be double sided on 3 ply cloth with gold tasseled trimming.  Click the flag image for more information!

HISTORY:  In 1571, faced with the naval invasion of the Italian peninsula by the Islamic forces of the Ottoman Empire, Saint Pius V called for the establishment of an international Catholic Alliance to meet them in a decisive naval battle and destroy once and for all the Muslim domination of the Mediterranean.