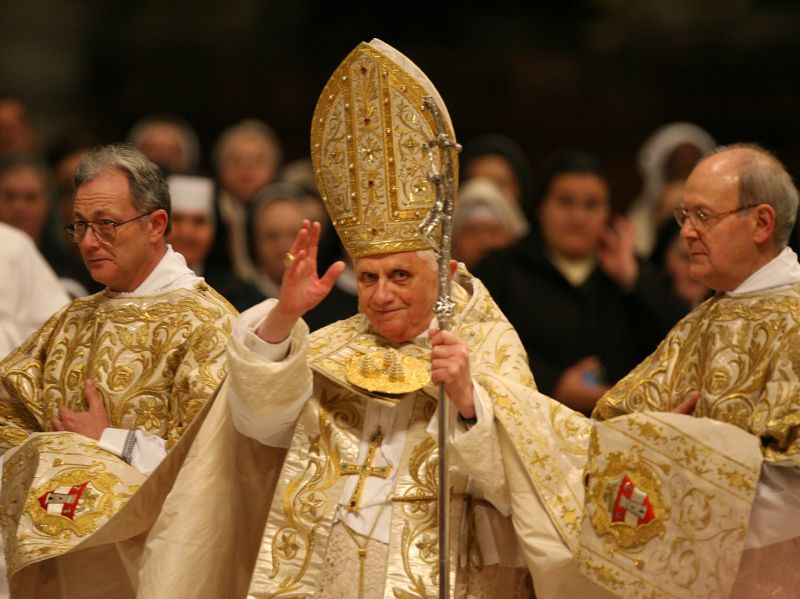 The most disappointing reality in the Catholic Church today is not sexual perversion, however gross that is. Because while acts of sexual perversion are morally wrong, if a man retains the truth of the Faith, there is still a possibility of his repentance.

So, the greatest tragedy is, then, the loss of the Faith, the loss of truth.  When a mind comes to love lies, to love to lie, to live in mendacity and to defend and promote mendacity, the soul of the man has descended to infernal regions.

Such a soul has nothing of itself or in itself to dispose it to repent, for it has turned its back on truth.

This is why in the Controversy over Benedict’s resignation, those who say he validly resigned, have no excuse before God or the Church.

Because, as the Vicar of Jesus Christ, John Paul II decrees in Canon 332 §2, the validity of a papal resignation arises from only objective causes, it does not depend on you or me saying its valid or not.

Indeed, as that canon declares in its final clause, NO ONE IN THE CHURCH has the right or authority to say that a resignation which is not in conformity with that Canon is valid.

Canon 332 §2 — If it happens that the Roman Pontiff renounce his MUNUS (office), there is required for validity that the resignation be made freely and duly manifested but not that it be accepted by anyone whomsoever.

Thus THE SOLE CRITERION for judging the validity of a papal resignation is in the objective facts of the act of resignation:

That means that NO ONE has the right to speculate WHETHER OR NOT a resignation is valid or not: it is only valid if it meets all THREE conditions simultaneously. It is NOT VALID, otherwise, that is if it fails to meet any one of those conditions.

Thus, every Cardinal, Bishop, priest, or talking head on Social Media, every journalist, layman, laywoman or consecrated religious, ARE BOUND BY THE CATHOLIC FAITH to judge the resignation of Pope Benedict XVI INVALID, BECAUSE

That makes his act of resignation NULL AND VOID, because its not in conformity with the obligation to renounce the papal MUNUS. Indeed, in accord with Canon 38, every juridical act which is NOT in conformity with the norm of law is presumed to be INVALID, unless there is added expressly a clause which derogates from the obligations of the law. — There is no wiggle room here!

Thus, all the arguments in favor of the validity, all the rationalizations, all the speculations about intention to resign the office, ARE POINTLESS.  Those making such intellectual or verbal acts HAVE NO RIGHT TO SPEAK, NO AUTHORITY TO JUDGE THE MATTER.

I therefore plead with all Catholics: do not go the way of Lucifer who rebelled in the beginning of time, because he wanted his own will, not that of God. Do not go the way of Adam and Eve who would not listen to God and would not mortify their minds and heart, but chose to rebel and tell God what was right and wrong.  Do not follow the faithless Jews, who having seen all the miracles of Jesus and His immaculate Holiness and integrity, chose to reject Him for the sake of doing their own will and following the elites of their own day.

I put you on notice. Reject the plain meaning of Canon 332 §2 and try to obviate it by speculations and excuses, and you will be damned, God will deprive you of the Light and every grace.

Because in doing such, YOU HAVE NO EXCUSE BEFORE GOD OR THE CHURCH.

#PPBXVI Its clear now by 4 polls that the CARDINALS are in SCHISM with the vast majority of the Lay Faithful. For while they unanimously accept B16's resignation as valid, the Laity hold that NO, #Benedictxvi is the true pope by 60 to 95% pic.twitter.com/P9N7pAQm8k

For more on this controversy see:

All the major Arguments for the Validity, and their refutations (y en Espanol aqui)

Why Pope Francis is, by the law itself, an Anti-Pope

Common errors of Canonists who are trained in Juridical Positivism, not the Mind of the Church.

My Reply to Archbishop Ganswein, and Cardinals Brandmuller and Burke

#PPBXVI Our recent poll found that 99% of all those who read the canonical evidence that Pope Benedict's resignation was INVALID are convinced that it was invalid. That argues strongly that all Voices who hold that it is valid, are intentionally lying and/or refuse the evidence. pic.twitter.com/wPe5ZZ8aKV

6 thoughts on “No excuse before God or the Church!”