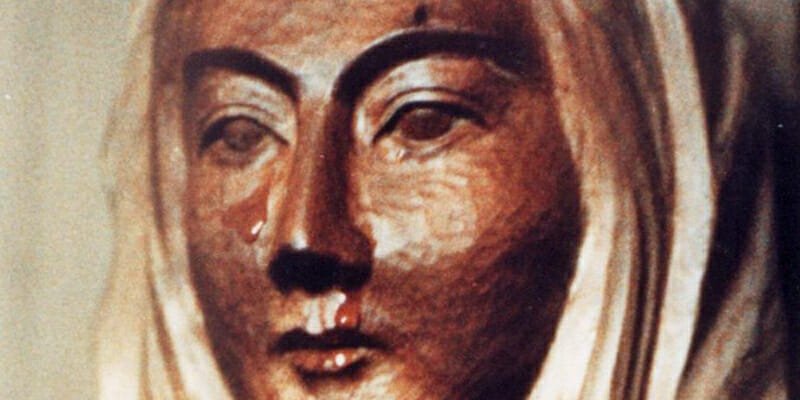 On the Feast of Saint Francis, Bergoglio had a pagan ritual honoring Pachamama in the Vatican gardens, during which time idolatrous worship was given idols and a tree was planted to placate the demon goddess of earth. This was the first abomination. Then Bergoglio had the idol brought into Saint Peter’s and receive veneration there, along with a bowl of desecrated earth.

Most Catholics do not know, but to desecrate the Vatican Gardens is an extremely diabolic act, because when Pope Leo XIII in his haste to discover the bones of St Peter had some poorly trained Archeologists dig up the tomb of Saint Peter beneath the High Altar, they dumped all the dirt they found IN THE VATICAN GARDENS. Later is was realized that that DIRT was the ashes of Saint Peter the Apostle and the Roman Martyrs burned on stakes by the Emperor Nero.

It was not surprising, therefore, that two days later the Angel of Akita, who had appeared to Sister Agnes Sasagawa 46 years ago, should appear again. If you do not know, at Akita, which is an approved apparition of Our Lady, Our Lady’s Statue wept repeatedly in the presence of Catholics and pagans, and forewarned of a great battle inside the Church between Cardinals and Bishops. (Google “Our Lady of Akita” for more about this apparition).

I report this, because, in my work for Ordo Militaris Inc., I had the unique opportunity to visit Akita in May and pray before the miraculous statue of Our Lady. The Message of Akita is about our days and it is a powerful call to repentance, constancy, perseverance and fortitude in the face of lies and wickedness.

Remember, the Message of Akita:

If men did not repent, Our Lady at Akita warned of world wide destruction by fire from the sky, and said that Catholics would have no consolation in those terrible days but the Holy Rosary and the Sign of Her Son (the Cross). That the living would envy the dead.

I mention, on my own authority, that Tertullian, a Father of the Church, taught that the worst sin of mankind is THE SIN OF IDOLATRY and that this sin alone MERITS THE DESTRUCTION OF THE WORLD. A destruction forestalled only by Christ’s Sacrifice on Calvary and mankind’s acceptance of that Sacrifice. This is the logic of the Apocalypse: when mankind rejects the Gospel at the end of time, that Destruction will rain down upon the whole world.

So you can infer the connections between these events and what Bergoglio did and is doing.

Message of the Angel of Akita

The Message was given on October 6 of this year, and is reported by WQPH of North Worcester, Massachusetts, USA, which is an EWTN affiliate. Their report is here in full (link).

Here is the message:

This is the speech said by Sister Sasagawa that Sister M heard firsthand.

The good thing to convey to everyone is, “Cover in ashes” (see Note 2) “and please pray the Penitential Rosary every day.  You (Sister Sasagawa) become like an child and every day please give sacrifice.”

Ms. S was asked by Sister M, may I tell everyone about this?, which when asked, per Sister M, she was told Okay by Sister Sasagawa.  Also, “Please pray that I (Sasagawa) be able to be like an child and give sacrifice,” was said by Ms. S as heard by Sister M.

Note 1: In Akita, the angel that appeared before Sister Sasagawa as a woman, and without thinking, Sister Sasagawa blurted out “Older sister”.  It seems she resembled her older sister who had died.  She was told “No, I am something that protects you.”

And then, “Let’s go to church”, and Sasagawa was guided there.  (It is thought to be the guardian angel of Komatsu).

Since an Angel from Heaven asked us to make reparation like Jonah (see scriptural references here) I strongly urge everyone to do this.

The Penitential Rosary, what is it? Why pray it?

Here is the text of the Penitential Rosary in English, for those who have never heard of this devotion:

Please note, that this devotion is approved by the Church.

Please note the REASONS why the Penitential Rosary is to be recited, which reasons explain why the Angel of Akita asked that we pray it, in response to the sacrileges at the Vatican:

THE PENITENTIAL ROSARY IS RECITED:

1. To implore mercy and pardon for our sins, and for all the sins of our brethren.
2. To obtain the grace of conversion, a sincere sacramental confession, and amendment of life.

Also, read what is said at the bottom of the link for the Penitential Rosary to understand more about this and why an Angel of Heaven was sent to give this message to the world.  This, I believe, is a lot more important than initiatives by men who should be doing their duty, but instead pray. For us without such a duty to act, we should be the ones praying.

Now, the combining of this Office with the Holy Rosary, said with arms extended in the form of a cross, has also been dictated by God Our Lord to Maria Concepcion Zuniga recently. He told her that “this will be a Penitential Rosary that will please the Heavenly Father a great deal,” because He, Christ, would be the One Who would stand before the faithful who recite it and offer it in remission for all the sins of the world – their own and those of others.

Among the members of a single family (as we human beings are), there must be solidarity. Some must compensate for others. And in the measure that we see God offended, in that measure we must offer penance, counteracting the works of the disordered world with works of virtue, of charity, and of atonement, for the purpose of attaining forgiveness for everyone.

Finally, the whole import of this Message from Heaven is this: IF YOU are in the state of mortal sin, habitual sin, have not confessed, YOU BETTER RUN TO CONFESSION as soon as possible, because God’s patience is running out. He is going to destroy this world sooner than we think, and the spiritual consequence of Bergoglio’s monstrosities will be terrible wars and persecutions, just like the false messiah was awarded a peace price but when on to cause 17 or more wars and the deaths of millions.