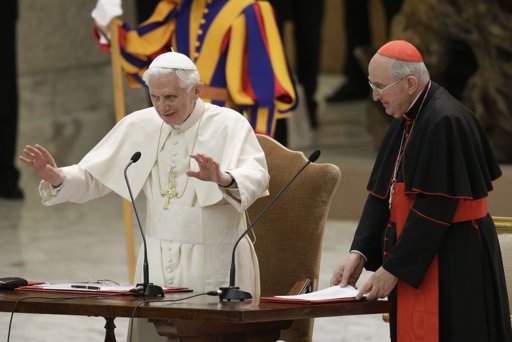 The evidence is there for all who want to see it. But you can only see it if you pay attention and think about what you are looking at and hearing.

Thus it was that 3 days after His declaration of renouncing the Ministry, Pope Benedict calls together all the Clergy of Rome to give them an impromptu talk, nearly an hour long.

On what?  His renunciation of the Papacy?

NO NOT AT ALL!

On the history of Vatican II and how what it intended to do was overcome by the Conspiracy of the Main Stream Media of that day to present the Council as advocating and teaching something entirely different.

Yes, because that is what exactly happened THREE DAYS BEFORE, when upon announcing His decision to renounce the petrine ministry, so as to dedicate himself to prayer, the Main Stream Media depicted what he did as a renunciation of the Papacy!

Thus, on Feb. 14, Pope Benedict to correct this error speaks to the entire Clergy of Rome and explains how Vatican II was misinterpreted and how the truth must come out by presenting the reality of what it did and said and not repeating what the Media claimed had happened.

During which discourse he says explicitly, “Now that I have decided to retire…”!

Note what he says.

He never says, “Now, that I have announced my renunciation of the Papacy”.

He is speaking for nearly an hour with eyes raised in the air, NOT reading from a script.

Does that sound like someone who has to resign because of frailty?

In short, Pope Benedict was giving the Roman Clergy all the information and principles of discernment to realize one day in the future, that He had not renounced the Papacy and was still their Bishop.

This is the brilliant mind of a man who can think 10 steps ahead of his enemies, and spill the beans in broad daylight without them realizing that he is undermining their coup d’etat.

This is a man who also profoundly realizes that he does not know, whether anyone around him can be trusted with the truth, so he speaks in parables. And it fits perfectly with all the other things he did that fateful month of February, 2013, as you can see from my report, “Benedict said in every way that He he did not resign“.

Finally, he indicates His trust in the Clergy of Rome that they will discover the truth one day, when, while referring to the preparations for the Second Vatican Council, he points out that the real fruitfulness of that ecclesial meeting lay in the fact that all the Bishops took the responsibility to join in prayer, action and small group meetings to discuss what was to be done, thereby indicating that the Clergy of Rome will be able to resolve this problem when they begin to do the same.

The original talk of Our Holy Father was in Italian, but an English translation is available:

La Stampa, one of the leading Marxist papers of Italy, did not realize it at the time, but as of the Spring of 2019, when the proof that the Renunciation was invalid was widely publicized, they removed their entire report and left only the photo of the event.

7 thoughts on “Feb 14, 2013: Pope Benedict warned Roman Clergy that He had not resigned”