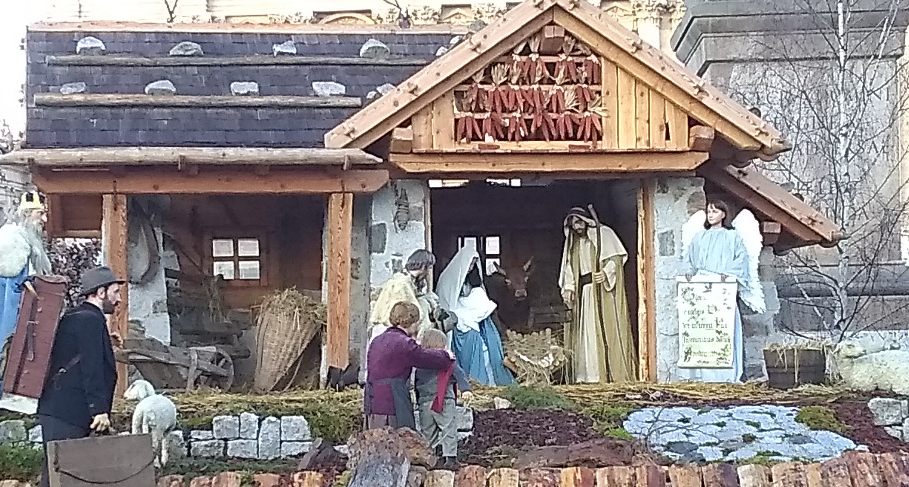 In this Article I will collect all the pertinent evidence. As I am trained in Cultural Anthropology, I will proceed by a forensic method.

… holds that Christ Jesus, the Eternal Son of God, was born of the Blessed Virgin Mary in a grotto of Bethlehem, in the early hours of December 25, in the reign of the Roman Emperor Augustus, while Saturinus was governor of the Roman Province of Syria (which held jurisdiction over Iudaea), and Herod the Great, King, at Jerusalem.

The forensic requirement to disprove the universal tradition, therefore, must be of the highest level. Namely, those who claim that Christ was NOT born on December 25th have to prove their claim. The presumption of right is with tradition.

For this reason, I am not going to presume the tradition is false or wrong. I aim to cite the evidence which is known that corroborates it.  I am not a Cartesian who thinks that an a priori doubt makes an investigation scientific, because it actually obstructs an impartial consideration of the evidence, wherein there should neither be doubt nor prejudice to either side of the outcome.  Nevertheless, I am an anthropologist, so I know that the universal Christian testimony of the ages is EVIDENCE which cannot be discounted.

In such an investigation, we look for evidence which requires that the birth of Jesus be no later than an no earlier than. These two limits or time points, are called the non postquam and the non antequam, or the point not after which, and the point not before which, respectively.

The Life of King Herod sheds light on the Non Postquam

The narrative in the Gospel of Saint Matthew cites some important historical facts. Let’s begin with the visit of the Magi to the court of Herod. The presupposition of this testimony of Saint Matthew is that Herod was holding court at Jerusalem.

Herod, at the end of his life had very poor health and knew his end was near. At the same time he grew arrogant and insisted on imposing his religious views upon the Jews of Jerusalem. Herod was half jew and mixed-in pagan practices. He went so far as to set up an image of the imperial Roman Eagle above the gate of the Temple, at the entrance to the Court of the Gentiles. This was outside the Temple precinct, but it outraged the zealots. Their rabbis convinced their young men to tear it down. This caused a riot and Herod had the rabbis and the young men who participated in stealing the image sent to Jericho to be executed. They were executed, by being burnt alive, on the night of a Full Moon. We know of these events from Josephus Flavius’ history of the era, entitled the Antiquities, Book XVII, chapter VI, n. 5.

We can deduce several things from Josephus’ account: Herod was still in Jerusalem when the zealots were executed. He was capable of great brutality just as Saint Matthew says. And that the execution took place on January 10, 1 B.C.. (Note that after 1 BC comes 1 AD, there is no year 0), because that is the only Full Moon visible at Jerusalem in this period.

Tradition holds that the Magi visited Christ on the Epiphany, which is on January 6th.

This non postquam is confirmed by the Roman Historian, Macrobius, in his Saturnalia, Book II, n. 11, where he says that Herod ordered the slaughter of newborns under 2 years of age, at the time of the death of his own son, Antipater.  Antipater died 5 days before Herod, who himself perished on April 8, 1 B.C.. So the slaughter of innocents had to have been ordered after April 2nd and executed before Herod’s death. The loss of his heir, Antipater, would have given Herod strong reasons to seek the slaughter of any rival King of the line of the House of David, thus confirming Saint Matthew’s account.

The non postquam enables us to make a first guess at a non antequam when we add the requirements of the Gospel of Luke who says that after 40 days, Our Lady presented the Child Jesus in the Temple, and then the Holy Family returned to Nazareth. Therefore, the Magi had to visit before the 40th day after the birth of Jesus. This means, that the birth of Jesus had to have been before January 6th, 1 B.C..

The Baptism of Jesus sheds light on the Non Antequam

According to the Gospel of Luke 3:23, we know that Jesus was about 30 years old when He began His public ministry, and that this ministry began with His Baptism by John. John himself began preaching a baptism of repentance in the 15th year of the reign of Tiberius Caesar, according to Saint Luke 3:1. Roman Emperors counted their regnal years from January 1 to December 31, even if they assumed power before January 1. This means that the 15th year of the reign of Tiberius Caesar began on January 1, 29 A. D.. This corresponds to the Prophet Daniel 9:25 who said that in 483 years after the issuing of the Decree to Rebuild Jerusalem (issued in 454 B.C.), the Messiah would be revealed.

Hence, counting back 30 years, Jesus was born sometime in the Fall to Winter of 2 B.C..  This means that Christ could not have been born before Sept 21th, 2 B.C..

It was Jewish custom of the time that Rabbi’s did not begin their public ministry until they were 30 years of age. We also know from the Gospel of Saint Luke, that Our Lord fasted for 40 days in the desert before He began His public ministry. Therefore, since Jewish fasts were preparatory, the fast would have had to ended before His 30th birthday.  Hence, the non antequem must be no earlier than December 18th, which is the 40th day from Nov. 8th.

The Temple Service of Zechariah sheds light on the non antequam

We know from the testimony of Saint Luke that the Archangel Gabriel appears to Zechariah while his turn was up for service in the Temple. From the study of Temple practices and the order of the Levites who served there, we know that Zechariah had to have been in the Temple from September 5 to September 11th of the year he served. That means, with travel and other normal delays, that John the Baptist could have been conceived no earlier than the 15th of September, and probably later, since Elizabeth would only be capable of conceiving naturally one out of every four weeks.  We also know that Saint John was 6 months older than Our Lord, according to the same testimony of Saint Luke, when he refers to the time the same Archangel was sent to Our Lady.  This means that Our Lord was conceived not earlier than March 15th, and thus born no earlier than Dec. 15th. This corroborates the calculation derived from Christ’s Fast and Baptism.

Epiphanius’ testimony on Epiphany sheds light on the non postquam

The ecclesiastical writer of the 3rd century after Christ, Epiphanius says that the Feast of Epiphany was established to commemorate the date of the Wedding Feast of Cana, as the beginning of Christ’s public ministry. If we combine this with the 7 days of Saint John’s Gospel, reckoning that these days were after Christ’s birthday, not before it, then we have a non postquam date of Dec. 31st.. This interpretation is more sound, because it can be expected that after 40 days of Fasting, Our Lord would have returned to Nazareth to meet with His Mother, and from Her learn of the Wedding Feast. It also makes sense, in that Our Lady was giving Him the push to reveal Himself, that He would not have done so before his 30 day birthday, lest He violate established custom.

From the historical record, the Gospel Narratives themselves require that we accept that the Birth of Jesus as occurring after Dec. 18th and before Dec. 31st..

Now, the mid-point between the non antequam and the non post quam, in such studies of this kind is the one with the highest mathematical probability of being the correct date. So what is the mid point of December 18th and December 31st ?……   Calculate it for yourself…

WISHING ALL MY READERS, FRIENDS AND ENEMIES,

A MOST BLESSED AND HOLY CHRISTMAS

FULL OF THE GRACES AND MERCIES WHICH
THE ETERNAL SON BROUGHT DOWN FROM HEAVEN
AT THE “FIAT MIHI” OF THE BLESSED VIRGIN MARY!

If you have noticed, the evidences point to Christ being born in 2 B.C.. You might ask, “Was not Christ born in the year 0 or 1 A.D.?” — Answer: No, because there is no year 0, the year which follows 1 B. C. is 1 A.D.. — But 1 A.D. begins 1 year and 1 week after the birth of Christ. Why is that? — Answer: Because the regnal year of Emperors begins on January 1st, and only once Christ attains the age of 1, can the regnal year be 1. So the First Year of the Christian era is the first full calendar year in which the Child Jesus is 1 year old. Another way to look at it, is this: the year Zero in which many Christians think Christ would have to be born is really the year 1 B.C., because until the day Christ was born, it was Before Christ’s birth. So, in 2020 A.D., we will celebrate the 2020th year of age, according to His Blessed Humanity, of the Incarnate Word of God.

6 thoughts on “Yes, Christ was born on December 25: Here is the proof.”