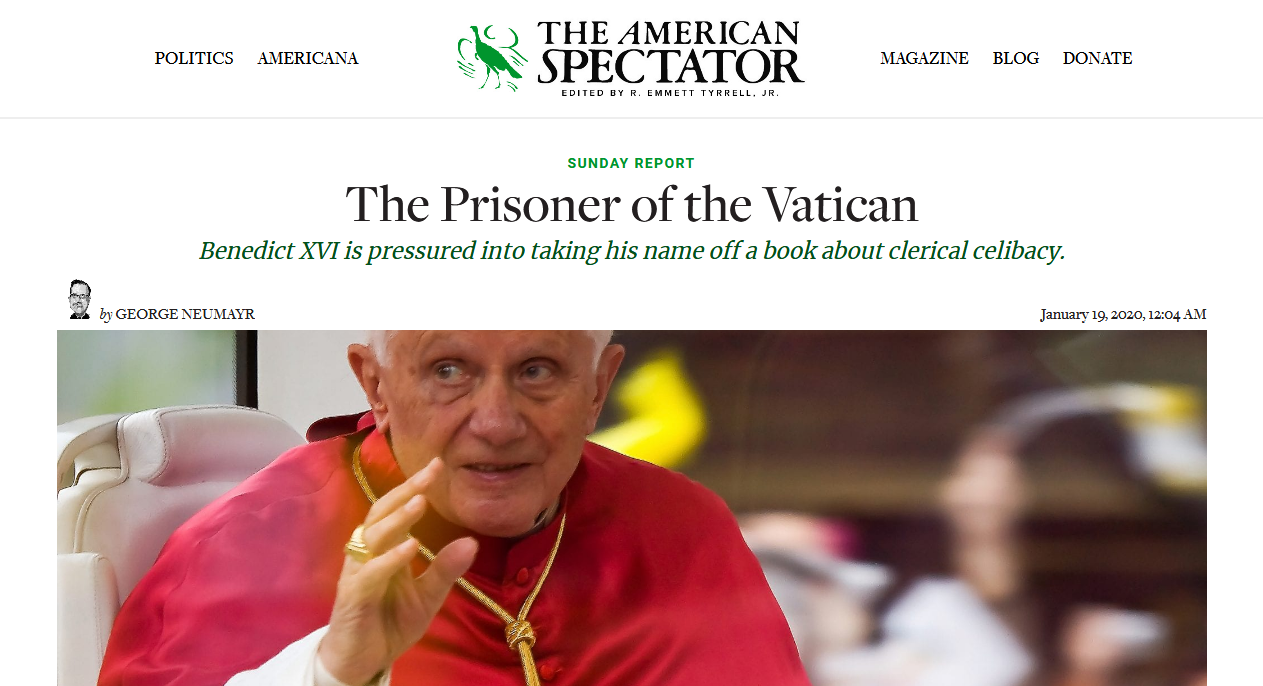 George Neumayr has shattered the controlled narrative of the Bergoglian revolution, with a devastating piece in the American Spectator, Sunday Edition, entitled: The Prisoner of the Vatican: Benedict XVI is pressured into taking his name off a book about clerical celibacy.

In it he precisely and accurately studies the Book Spat which erupted this week between Cardinal Sarah and Bergoglio, and shows what it means about Pope Benedict being totally under the power and control of the St Gallen Mafia Media Establishment.

In one of his last speeches before abdicating in 2013, Pope Benedict XVI decried the liberalism that had seeped into the Church after Vatican II. To this liberalism, he traced “so many problems, so much misery, in reality: seminaries closed, convents closed, the liturgy was trivialized.” But he then proceeded to hand the Church to the very liberals responsible for these problems and to a successor set upon liberalizing the Church even more.

Not long after assuming power, Jorge Bergoglio took a veiled swipe at his predecessor. He told an interviewer that Vatican II had encouraged openness to “modern culture” but that “very little was done in that direction,” a shortcoming he promised to correct: “I have the humility and ambition to want to do something.”

To accelerate his liberal revolution in the Church, however, Pope Francis had to make sure that his predecessor was under control. He accomplished that by having Benedict live on the Vatican grounds — an arrangement designed to muzzle him that has amounted to turning Benedict into the prisoner of the Vatican.

Read the rest at American Spectator: https://spectator.org/the-prisoner-of-the-vatican/ where the screenshot used as the Featured Image above was taken.

And for comparisons, you may want to take a look at From Rome’s Article, The Imprisonment of Pope Benedict XVI, from July 8, 2019, where the events before and after the Renunciation of Feb. 11, 2013 where studied in chronological order to reveal the same reality. An article which was roundly mocked by Bergoglian apologists and Trad Inc. at the time, but which has been proven in the substance of its analysis by recent events.

3 thoughts on “George Neumayr — The Prisoner of the Vatican”