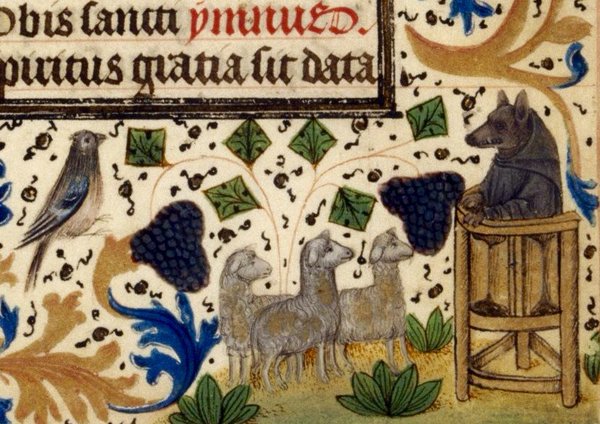 From Rome has been ahead of many issues way before the general public confronted them. One of these regards the problem of having a man whom you think is the Pope be a man whom you know is a heretic.

From Rome answered this in an editorial of May 12, 2016, nearly 3 and a half years ago. Back then nearly no one took notice. It was too politically incorrect. But now many, having seen the unending monstrosity of Bergoglio who is willing to publicly slap and excoriate with the most foul language a woman merely for pleading for the help of fellow Catholics who were being persecuted by his Marxist allies in China, and his total lack of insouciance at the publication of a book by Pope Benedict on Celibacy, the barriers of non-think have, are or about to fall in the minds of the general populace.

Some readers have remarked that From Rome does not speak so much about the heresies or errors of Bergoglio anymore, but this is not because he has stopped, or that this publication finds them tolerable, but because the solution to the problem of Bergoglio is simple: Restore Benedict XVI because he was robbed of the Papacy, and we were robbed of his Pontificate!

In this editorial, written when the pretensions to the Papacy of Bergoglio were still commonly held, hope was held out for his repentance. But now after nearly 4 years, that is clearly never going to come about. Those still hoping for it, are deceiving the faithful.

Nevertheless, we share with our readers now in January of 2020, what we published in May of 2016, for your edification and thought, and to share with your fellow Catholics who are still struggling to understand Bergoglio and why the clergy are obsessed with remaining in communion with him.

How Bergoglio’s Permanence means the apostasy of the Flock

Rome, May 12, 2016 A.D:  There is no greater and more radical challenge for the Christian believer than to take another as his Master.

Indeed, Christians are recognized by the fact that they regard Jesus Christ, and Him alone, as their Master, in accord with the scripture verse, in which Christ condemned the religious leaders of ancient Israel, Matthew 23:10 ff:

10 Neither be ye called masters; for one is you master, Christ. 11 He that is the greatest among you shall be your servant. 12 And whosoever shall exalt himself shall be humbled: and he that shall humble himself shall be exalted.

Indeed, its very tempting, in today’s world in which truth is up for grabs and violent political clashes are being waged on all sides, for the Christian to take an “I’m ok, you’re ok” view, that is, a “get along with everyone” kind of attitude, in which truth does not matter, only co-existence.

The Loadstone of Hope

The only problem is, that there is a vast difference between the man who thinks Christ is a religious teacher and the man who is loyal to Christ no matter what.  First first regards Him as one might regard a philosopher:  taking the man’s teachings here and there, according to his personal tastes and likes, but not as a rule of life.

The second regards Him as the Incarnate Son of God, apart from Whose teaching No man on Earth can escape eternal and perpetual damnation in the fires of Hell.

As St. Augustine said, “If you believe what you like in the Gospel, and reject what you don’t like, it is not the Gospel you believe, but yourself.”

Indeed, what distinguishes the Christian from all other men is Hope.

Hope is that theological virtue least spoke of today, because in modern times a proper understanding and appreciation of it has been so attacked in the minds of men, that nearly nobody appears to have it or cultivate it or use it.

Hope is that theological virtue which puts full faith and confidence in the promises of God for those who keep them.  Its the most essential and key Christian virtue, given to us in Baptism, but cultivated only with good works.  If you do not really hope that God will reward you for fidelity to Christ, then obviously you will not be faithful to Him.  Likewise, if you think that you can manage for yourself the rules by which you will get into Heaven, there is no need for you to have hope in God’s promises, you can presume for yourself — a presumption which is both your ultimate self-deceit and the absolute guarantee of your own damnation.

All of this has an ecclesiological impact, that is, all of this effects the Church, what She is and your place in or outside of Her, who alone is the ark of Salvation, the Pillar of the truth, apart from AND outside of which no man woman or child can be saved.

The Temptation of Bergoglio

The great temptation presented by the election and presence of Bergoglio on the Apostolic Throne, then, is precisely this: the offer of a Church, of a Christianity, in which Christ is no longer The master, but merely a guide post from which one can wander here or there and remain a “christian” without fidelity and without the need to practice hope.

This temptation is offered the Cardinals, the Bishops, the priests, the religious and the laity, is offered thus to the whole Church, because in Bergoglio they have, without any shadow of a doubt, a man who does not believe in Christ as his Sole Master, who does not love or tolerate the Church as Christ founded it or gave it, does not suffer the rules the Apostles, the Faithful Disciples of the Lord handed down to us, and is filled with compassion and love for the traitor who sold Christ for 30 shekels of silver.

To have a public manifest heretic on the throne of the Apostle Peter, and tolerate him, presents for every true Christian, the opportunity of pretense, to keep the name “Christian” or “Catholic” without any more obligation to Christ.  Its the ultimate game-plan of Lucifer.

Either Bergoglio must Change or the Church has changed

Finally, if one were to accept this situation and the principles which erroneously lead to it, as have been briefly described here, it would be enough to end this article with the usual lament.  Because with faith it is possible to lament these things, but with hope it is not possible to tolerate them.  Nearly every author on the Internet today, and as far as we know, all the Cardinals and Bishops of the Catholic Church since April 8, 2016, the date on which “Amoris Laetitia” what released, do not have or are not acting faithfully to Christian Hope.

For the man with Christian hope, would declare and manifestly insist and demand that Bergoglio be canonically reprimanded, and if refusing 3x, be declared to be in open schism with Christ and His Church, and self-deposed by reason of his malice and heresy against Him and His Bride, the Church, whose first duty is to keep herself immaculate and worthy of Him.

Either Bergoglio must change or the Church has in fact changed, because if he repents, the Church is saved in Her fidelity to Christ, and Christ is glorified above all human whim, even the human whims of the Roman Pontiff. But if Bergoglio does not change AND the Church tolerates him, it is the Church which has changed, She has committed adultery with Bergoglio, accepting him rather than Jesus Christ as Her spouse, the God above all other gods…

CREDITS: The featured image is of the Medieval Manuscript depicting The False Shepherd, a detail of the illumination from the mss. Douce 266 in the Bodleian Library. As a faithful reproduction of a work of art produced more than 200 years ago, it is in the public domain.