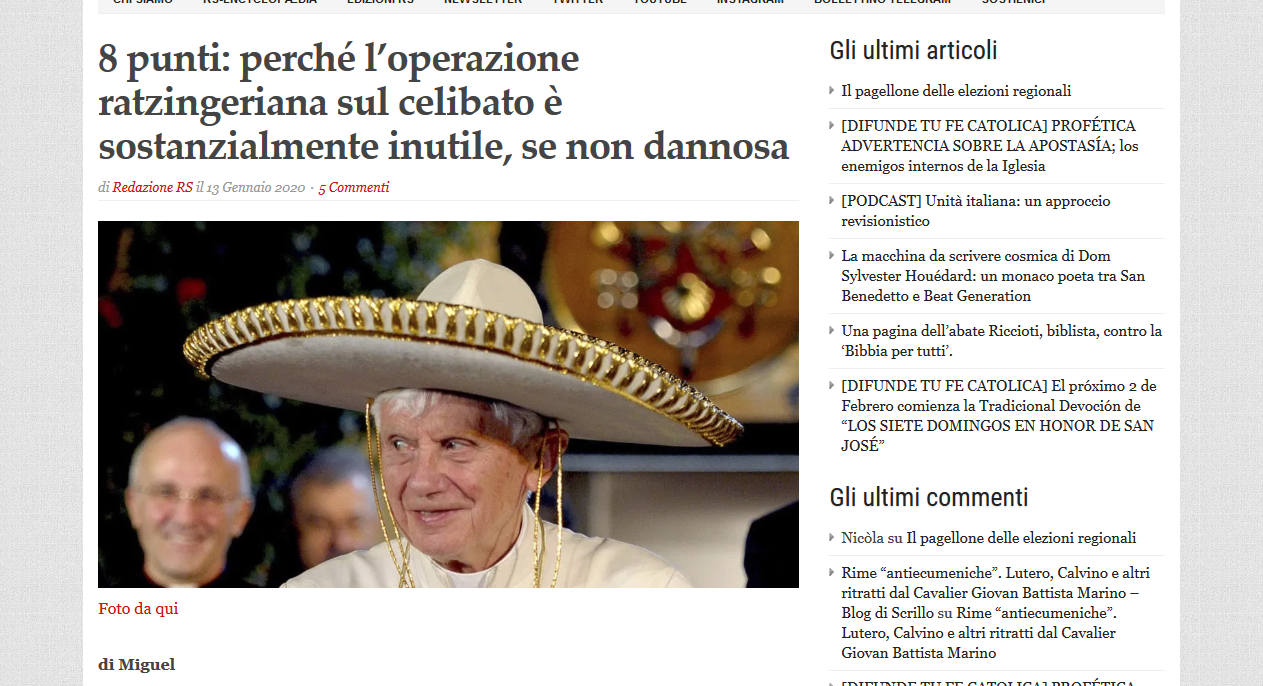 Many are of the opinion that Bergoglio is not the Anti-Christ, but his ability to convert so many over to serve his evil agenda is remarkable, if not preternaturally diabolic.

The latest example is the  Annual Letter from Radio Spada, a Traditionalist Radio Apostolate here in Italy. They join the attack with FSSPX.NEWS against the Holy Father, Pope Benedict, but they do not hide their animus, they are openly vicious.

Their main argument can be found here. They illustrate it with a picture of the Holy Father wearing a Sombrero. I guess that is supposed to make him look ridiculous. But only a racist from Eastern Switzerland would think such a thing, since a Sombrero is a traditional hat for respectable persons in Mexico and has been worn by Catholic laymen and clergy for centuries, including Saints and Blesseds of the Church before Vatican II.

The article, if you can imagine, goes down hill from there: attack, attack, attack.  Not Bergoglio but Benedict. The Author bravely signs his name as Miguel.

His first argument is that, even if a person says the truth, you should distance yourself from his profession if you disagree with his politics.  This is a tactic which has nothing at all to do with the Gospel, but for Miguel, it is the essence of religion, evidently.  I recall what Our Lord said, when the Apostles faulted others for using the Name of Jesus to exorcise.  I think He said He approved of what they did.

Second, he argues that since the publicity on the book presents Pope Benedict XVI as having renounced the papacy, then that means he has renounced the papacy.  Here we have the direct opposite hermeneutic as before.  In the first argument, you should never believe your political enemy even when he says the truth, when your enemy is Pope Benedict. But now, Miguel cites Bergoglian news media as making a claim against Benedict and he takes it as Gospel truth, more authoritative than canon law. So we should not believe the truth told by someone we do not like, but we should believe the truth of someone we do not like. Which is it?

Third, he claims that the question of Celibacy is relatively a minor issue, and not much fuss should be paid to it. If Miguel claims to be a trad, I cannot see what Tradition he is upholding….

Fourth, he claims the entire Book Flap was created to deceive, that they are really all in agreement about abolishing Celibacy.  I won’t comment on this, as it is patently absurd to think that Cardinal Sarah was publicly attacked by Archbishop Ganswein as part of a pre-planned theatre.

Fifth, after citing a long passage from Saint Pius X, he implies that the Saint would have condemned both authors of the Book as modernists.

In fine, Miguel closes with the most vicious attack of them all (I paraphrase): Pope Benedict has resigned. He promised to remain silent, but he won’t shut up! He is gravely damaging the Church by making these interventions just as he has gravely damaged the Church by the concept of a pope emeritus. — I do not know which script Miguel is reading from, but it sounds like something Cardinal Parolin may have given him to read.

Where do I begin to unwrap such nonsense? Uhm. If there is no such thing as pope emeritus, then Pope Benedict XVI is not an emeritus, but still the pope, because the title pope emeritus means he still holds the dignity of the pope, just like Professor Emeritus means that you still enjoy the dignity of a professor.  And if he still holds the dignity, then he is still the Pope, because there can be no papal succession unless the first guy renounces EVERYTHING. Hence Bergoglio was never pope, and you, Miguel, have just committed a most diabolic act of perfidy against the Roman Pontiff, Christ’s Vicar on Earth!

CREDITS: The Featured Image is a screen shot of the web page cited in the Article, used according to fair use practice.