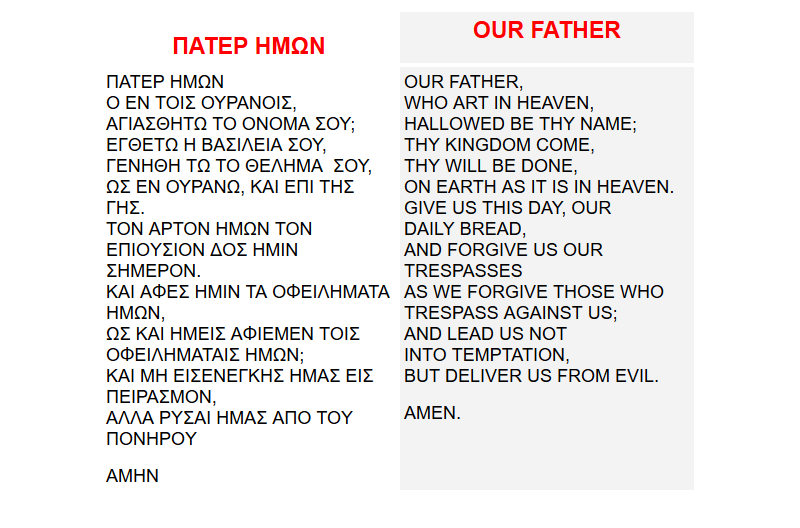 It is the height of heresy and pride to presume to correct Our Lord Jesus Christ, the Only Savior and Redeemer of mankind, and the One Master and Teacher of all.

But this is the madness and insane perfidy of Bergoglio and his luciferian followers: they insist that the Our Father needs to be changed because it is theologically incorrect!

These men need to be slapped in the face, like it is said Saint Nicholas of Myra did to Arius the heretic. I say, heretic, because to break from Jesus Christ’s version of the Our Father is to break with Christ and His Church totally. And that is what heresy, means, to divide.

When we speak of the prayer, known as the ‘Our Father’, we are speaking of THE prayer taught by Jesus Christ — the only prayer He actually taught us — which is found in the Gospel of Saint Matthew, chapter 6, verses 9 though 13.

The argument these godless deceivers use to support their claims and confuse the faithful — I think you have to be a read idiot of a Christian to think the pope can change the Our Father — is that God does not tempt anyone.

First, I do not understand their objection. Because it is clear that their god is the Devil and their glory is in their shame. And everyone knows the devils tempt every man.

But as to the text of the Our Father:

And lead us not into temptation, but deliver us from evil.

In the Greek of the Scripture text (sources everywhere), which faithfully and inerrantly reproduces the exact words of Our Lord:

The words of controversy are lead and temptation, or in the Latin: inducas and tentationem, and in the Greek EIΣENEΓKHΣ and ΠEIPAΣMON.

First, I will comment on the Latin. Those who think the Latin word means always and only the kind of occurrence in which a thing or person or demon tempts you to commit a sin, by suggesting it to your, or being the occasion of a vicious habit you have to commit sin, are completely ignorant of the Latin tongue. Because tentatio means a testing or a being tested. The sense of temptation is only a Late classical usage.

The English translation of the Latin, therefore, is simply literal. English, it must be remembered, as we speak it today, is the product of Catholic Monks working for centuries to teach the Normans and Angles, Welsh and Scottish to speak coherently. When a monk wrote temptation he was thinking of the Latin sense of tentatio not temptation as it is used in modern English commonly.

Some idiots who parade as scholars hold that the masses are so ignorant that you better change the words rather than teach them the proper meaning of words. This is complete elitist and intellectualist C**P — excuse my English!

As a Latin translator, I know that all you need to do, to correct problems of mis-comprehension is to put a footnote. A single homily on the topic can serve the same purpose. There is no need to change the translation because it is obvious from Scripture that God puts men to the test, and that since the grace to weather God’s tests is not our by right, but by gift, we ought in humility pray not to be put to the test, rather than in pride and presumption, to pray for the grace to resist all tests, as if we were some sort of supernatural champion who never falls or fails in a test.

So if you hear anyone in your Parish start saying the wrong words, correct them. And if the priest insists on the wrong words, SHOUT HIM DOWN and tell him if he will not submit to Jesus Christ as his Master, to GET the hell OUT OF THE CATHOLIC CHURCH and become a Lutheran!

CREDITS: The Featured Image is a screen shot of https://www.lonweb.org/ourfather/pn-gre-ing.htm and complies with fair use.  The text of the Our Father is copyrighted by God and cannot be infringed without the penalty of eternal and everlasting torments in Hell.

10 thoughts on “Do not say the Heretical ‘Our Father’”