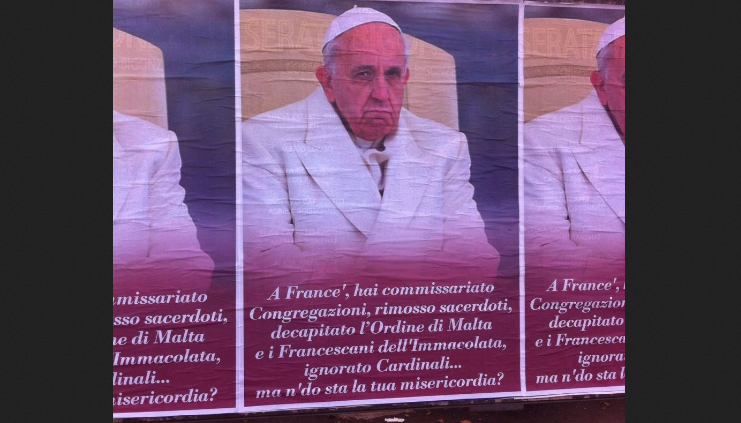 In the Catholic Faith there is only One Master, One Savior, One Teacher: Jesus Christ.

For that reason, no one can be a member of the Church who dares question or fault or criticize or correct Jesus Christ.

Hence, it is a grave duty arising from the essence of what it means to be a Catholic that we defend the Honor and Majesty of Jesus Christ.

Let no one tell you the contrary. Do not listen to those who tell you to be silent. The time has come to shout it out. Shame the clergy who claim that this man is without question a member of the Church. Those who say this are shameful hypocrites and godless traitors.

Canon 1364 says that heretics are ipso facto excommunicated. It is impossible that such persons be allowed to hold or to appear to hold any office in the Church. Those who claim we should “Recognize and resist” are saying you should ignore Canon 1364 and yet condemn Bergoglio for meriting to be punished by it.

Such a mentality is psychotic — that is, divorced from reality.

There is only 1 Catholic position: insist on a Synod of Bishops to condemn him for his heresies and errors and declare him no longer a member of the Church. Such an action does not attack the papacy or anything in the Church, because no heretic is judged as a member of the Church, nor for holding an office. For this reason the Code of Canon law makes no provision to exempt anyone, even the man who is the Roman Pontiff, from the penalties of canon 1364. — Not withstanding the fact that Benedict XVI is the pope, not Bergoglio.

Thus, it is merely a trick to keep him power, to ignore Canon Law and insist Benedict is not the pope, because they want an excuse not to make any move to condemn Bergoglio. Those who play these tricks of the mind, have no love for truth nor for you.

The time has come to condemn, and to convene an imperfect Synod.

To remain silent anymore is to consent.

CREDITS: The Featured Image is of a poster placed on placards here at Rome, protesting the tyrannical rule of Bergoglio. It is in the public domain.

4 thoughts on “It is a grave duty, to denounce Bergoglio for all his heresies and blasphemies”