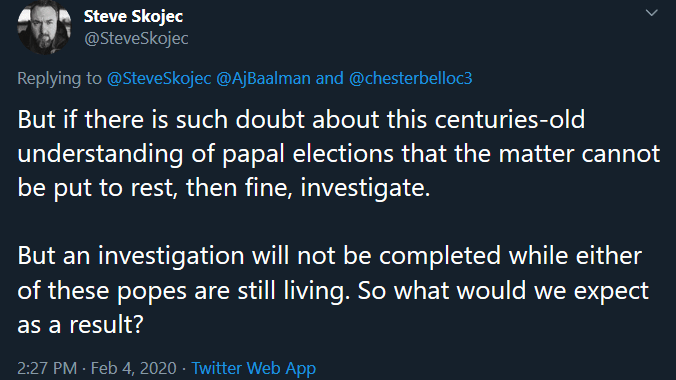 I have watched Steve Skojek’s argumentation over the last 14 months go from straw man arguments, to unreasoning blather, to insults and vicious invective against almost anyone who would point out the unreasonableness of his approach to the problems with the Declaratio of Pope Benedict XVI and its consequences in the Church.

And I have kept silent about it, except for a passing comment here and there, here at FromRome.Info, because I am not concerned with nit picking the sophistries of immature people who do not have the intellectual or moral integrity to discuss something honestly as an adult. I am concerned with the truth of history in this matter, not in the sense of what people might write about it now or in the future, but in the sense of what really did happen, and what it really does mean in canonical and theological terms.

But as Skojec’s private magisterium has become a personal superstition and grows daily among some minds as a cult of superstition, I consider it necessary to say something, because I want every one to be saved and to come to the knowledge of the truth. And for this, error must be refuted, by all who can ably refute it.

So I will broach this topic by commenting on some twitter conversations, the screen shots I was given. Here Steve comments on two groups, as he calls them, the Sedevacantists and the Bennyvacantists. Steve says he did not invent the latter term, but he keeps using it as a 13 yr old petulant school-boy uses a phrase he thinks is cool, but which makes him appear in reality stupid. Because by the term, Steve thinks he is referring to those who hold that Pope Benedict is still the pope, but the term obviously refers to those who think that Benedict vacated the see. So the term really refers to himself. The other term, for those who do not know, refers to those who think there have been no popes since Pius XII. — So of these 2 groups, Steve says: 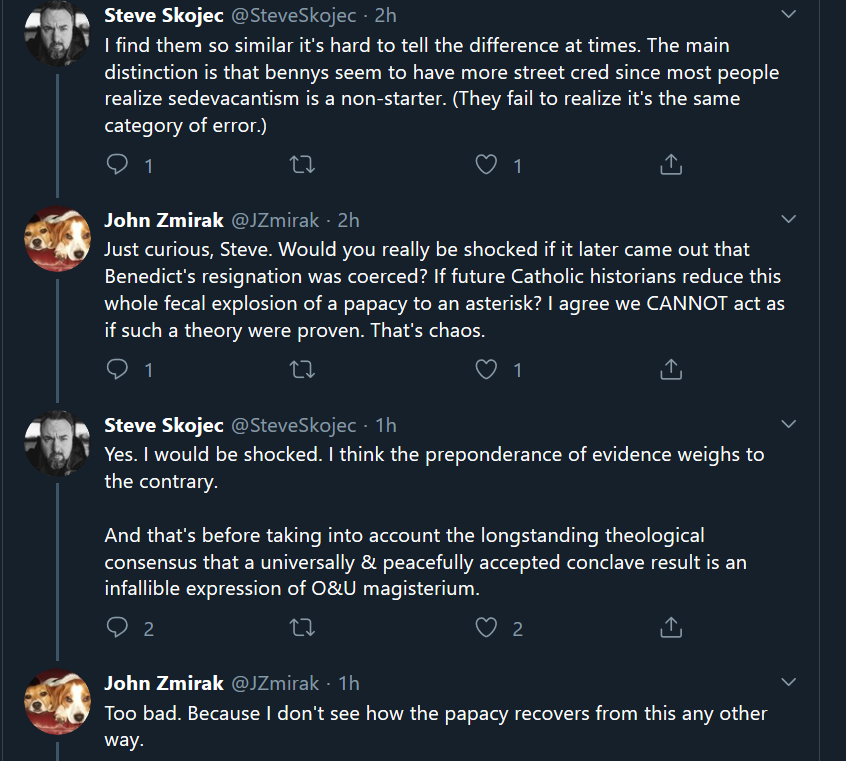 Steve, if my sources are correct, has admitted to taking one introductory course to Canon Law at Steubenville, where he graduated. My sources tell me that Steve also cannot read the Code of Canon Law, because he does not read Latin. So he reads it, when he does, in the English translation, which, as I have mentioned many times, is both not authoritative and full of errors. As far as I know, also, Steve has never tried to investigate the matter further than his limit of knowledge and has not gone to Rome to speak with anyone about the questions of law or fact. — I have it that he corresponds or at least knows Ryan Grant, whom I showed the other day does not know the basic principles of Canon Law. Ryan, himself, though he is a published translator, is not a very good one. The passages I have examined in his translation of Saint Alphonsus have more than one error in every sentence, and hence I conclude they are worthless for anyone to use.

For this reason, I think that Steve’s first tweet, above, is very honest. I do not think he has the intellectual preparation to see the differences or appreciate them. Even if he knew what they are. Sedevacantists are a group of individuals who do not care about the Church in the least. They only care about condemning others so that like Jansenists they can revel in a being better than everyone else kind of spirit.  Catholics, on the other hand, when they encounter schism and heresy, do something about it, by either trying to reconcile the parties involved or seeking their canonical solutions, because their love is for the Church and for the salvation of souls.

That is why, if you love the Church, you can probably see the difference between Sedevacantists and Catholics. It is not just an argument over what was said by so and so and whether that is heretical or not. Though, Sedes nearly always get this wrong, because they have an animus to find fault where not as much fault is found as they would want, in order to continually justify themselves as better than everyone else.

Catholics, concerned about the canonical problems in the Declaratio of Pope Benedict XVI, are obviously not interested at all in themselves, they are interested solely in the good of the entire Church and solving the problems at the root. To deny that is merely a glib ad hominem of a person who cares nothing for the Church and has no consideration for the possibility that his fellow man might actually care for the common good of the Church. His desire, rather, is always to put him down, because that is the only way to prove his superiority.

In his next, tweet Steve recites his straw man argument, which he brings out and dangles about like a shaman does with the bones of a dead man, before reciting an incantation on cue.  Steve has been shown by many interlocutors over the past year that the opinion of John of Saint Thomas about universal acceptance refers to a canonical election, not to a doubtful or uncanonical election — taking doubt here in the objective positive sense. — So his continued appeal to universal acceptance is simply dishonest. And his continued use of it as a dogma is superstition.

At this point A. J. Baalman shares a series of tweets, drawing on the commentary on Canons 332, 187 and 188 made by Cathy Caridi on her blog, Canon Law Made Easy, which I reviewed yesterday.  A. J. says: 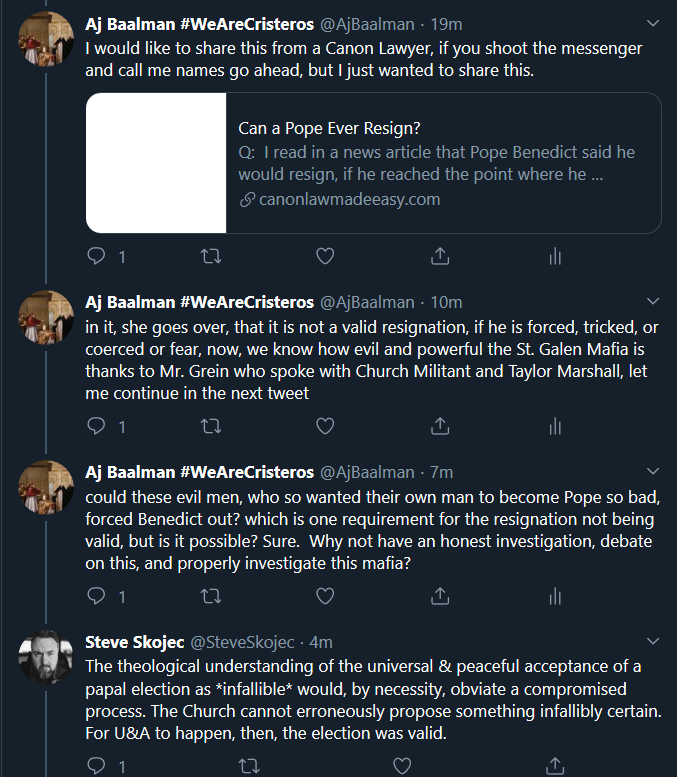 Notice how Steve brings out his straw man, again, and rattles it in the air, as if by such an incantation you can participate in a rational argument. He omits the word “canonical” in front of “papal” once again, to make it seem more supportive of his position. But here he goes one step further. There can be no question of an problematic papal election so long as it was accepted. No need to investigate. — I do not know what others might thing about such a line of reasoning, but it sounds to me the kind of thing a canon lawyer working for the Lavender Mafia might use, because it really aids and abets almost any possible course of corruption and interference in a papal election, as to defy rational explanation. No honest man can reason thus.

A. J., counters and insists on an investigation, and Steve responds: 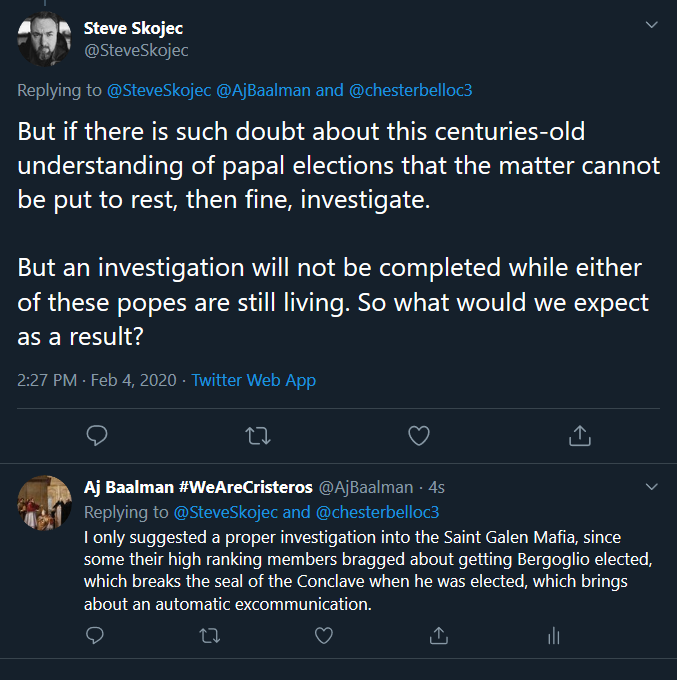 Steve says an investigation should be done, but it won’t be completed in the life time of the Pope or of Bergoglio. That is a very bold claim coming from someone who is not an investigator and who has shown no inclination to examine the facts already presented in the historical record. It is also another attempt at gaslighting, because it takes about 5 seconds to see the Renunciation is invalid.

8 thoughts on “From straw man to superstition”