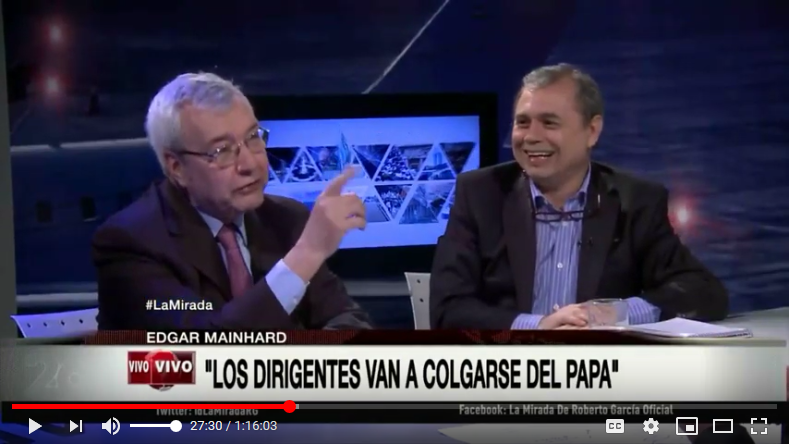 BREAKING — In an intercepted phone call — one of many which were captured during the corruption investigation in Argentina over foreign influence from Iran, the Head Vatican Intelligence officer in Argentina affirmed that he and his boss, Jorge Mario Bergoglio, were indeed members of the Masonic Lodge.

The explosive revelations where made on Roberto Garcia’s TV program, La Mirada, which aired on November 27, 2017 on Channel 26 in Argentina.

Here is the full video:

The video above, at 27:57, features the guests Edgar Mainhard of Urgente24 and the man who speaks about Bergoglio, Juan Bautista “Tata”” Yofre, who was State Intelligence Secretary in Argentina between 1989-1990 and was the Ambassador of Argentina, concurrently to both Portugal and Panama, during the government of Carlos Menem.

In the interview, Roberto asks Tata to discuss the “unpresentables of Argentina that surround the pope”.

“Tata” recounts a phone call that had been aired during a time of “negotiations with Iran” and that such phone calls had been aired on national television. In one phone call between “Yussuf and Karim” which had come out in the outlet “La Nación”, but later disappeared, Tata says, during the call, Yussuf tells Karim about his encounter with Bergoglio’s Vatican Chief of Intelligence in Argentina. “Tata” made a parenthesis to emphasize that Bergoglio indeed had a Vatican chief of Intelligence there in Argentina and that he knew him personally, but did not mention the name.

Tata continues recounting that on the phone call, “Bergoglio’s Vatican Chief of Intelligence told Yussuf that he [the Chief] was a mason and so was Bergoglio.” Tata says, “This was on ‘La Nación’. You could have listened to it yourselves. I listened to it because I had to give it credit.

The penalty for becoming a member of the Masonic Lodge is excommunication. That this was the case, even after Vatican II was made clear in a letter from the Congregation for the Doctrine of the Faith, dated Feb. 17, 1981 and signed by Cardinal Franjo Seper (See text here). Cardinal Seper in that letter declared:

On 19 July 1974 this Congregation wrote to some Episcopal Conferences a private letter concerning the interpretation of can 2335 of the Code of Canon Law which forbids Catholics, under the penalty of excommunication, to enroll in Masonic or other similar associations.

Since the said letter has become public and has given rise to erroneous and tendentious interpretations, this Congregation, without prejudice to the eventual norms of the new Code, issues the following confirmation and clarification:

1) the present canonical discipline remains in full force and has not been modified in any way;

2) consequently, neither the excommunication nor the other penalties envisaged have been abrogated;

Two years later, on Nov. 26, 1983, following the promulgation by Pope John Paul II  of the new Code of Canon Law, a public doubt arose regarding whether that penalty had been removed or not in the new Code.  Cardinal Ratzinger, now head of the Congregation for the Doctrine of the Faith responded with an extraordinary intervention, confirmed in forma specifica by Pope John Paul II. The key passage of which reads:

Therefore the Church’s negative judgment in regard to Masonic association remains unchanged since their principles have always been considered irreconcilable with the doctrine of the Church and therefore membership in them remains forbidden. The faithful who enrol in Masonic associations are in a state of grave sin and may not receive Holy Communion.

It is not within the competence of local ecclesiastical authorities to give a judgment on the nature of Masonic associations which would imply a derogation from what has been decided above, and this in line with the Declaration of this Sacred Congregation issued on 17 February 1981 (cf. AAS 73 1981 pp. 240-241; English language edition of L’Osservatore Romano, 9 March 1981).

In other words, the excommunication leveled in Canon 2335 against all Catholics for enrolling in a Masonic Lodge remains in force. This is in accord with the principle of Canon 6 and Canon 20. And thus, the excommunication of Canon 2335 in the old Code is to be understood, in accord with this declaration made by the CDF, to be subsumed into Canon 1364, which punishes by excommunication latae sententiae the crimes of Heresy, Schism and Apostasy, since clearly affiliation with the Masonic Sect is equipollent to all three under the diverse aspects of its creed, its purpose, and its manner of working.

THE CONSEQUENCES ARE SERIOUS: An excommunicated person cannot validly receive any dignity, office or munus in the Church in virtue of Canon 1331 §2 n. 4, of the new Code of Canon Law. That means, that it is canonically impossible that Bergoglio have assumed any ecclesiastical office after his enrollment.

Since Cardinal Ratzinger no doubt had knowledge that Bergoglio was a Freemason, as both head of the Congregation for the Doctrine of the Faith and as Pope, it follows that as pope, if it was demanded of him that he resign the Papacy, so that Bergoglio might succeed him, he would have had the most grave obligation to dissimulate, so that while appearing to renounce, he would deprive Bergoglio of the Petrine Munus, by renouncing something else, as I surmised in my previous article, How Benedict has defeated “Francis”. And especially in my article, Benedict’s End Game is to Save the Church from Freemasonry.

I think, now, you can see why no supporter of Bergoglio cares the lest thing for Canon Law. Cardinals included. How many others in the Vatican are members of the Lodge?

Will Chris Ferrara and Steve Skojec and others, like Cardinal Burke, now stop saying that Bergoglio is definitely the pope? Or are they Freemasons too? — I ask this question because the public has a right to know the answers.

POSTSCRIPT on Evidence and Actionability

There are 3 kinds of evidence, about matters as grave as someone being a Freemason. There is non actionable and actionable. Of the first kind, the non actionable, is information which is hearsay, that is third hand, where there no certainty if the chain of transmission has not invented, corrupted or faithfully related what happened or was said. No legal system in the world accepts such uncertain third party evidence.  Of the second kind, actionable, there are two kinds: morally actionable and legally actionable. Morally actionable evidence is the kind upon which you are obliged to act, but cannot bring a legal charge due to lack of records. Legally actionable is of the kind upon which you can bring a legal accusation. This includes third hand testimony given in affidavits or recordings or before credible witnesses. Even in the Church there is law. And, of the kind of evidence Pope Benedict XVI had as of Feb. 2013, I surmise it was only the morally actionable kind, because I have no legally actionable evidence that it was anything else.

However, with this intercepted phone call, the Entire Church has legally actionable evidence, because the phone call was heard by the entire Argentine people on live TV, and we have the testimony of an Argentine Ambassador that that phone call was broadcast. Just find 2 or 3 others persons who heard it, and have they swear an affidavit. Then the Cardinals who are NOT Freemasons, and or any group of Bishops, call a Council and declare the man outside of the Church and deposed from all offices.

22 thoughts on “Vatican Intelligence officer: I am a Freemason and so is Bergoglio”