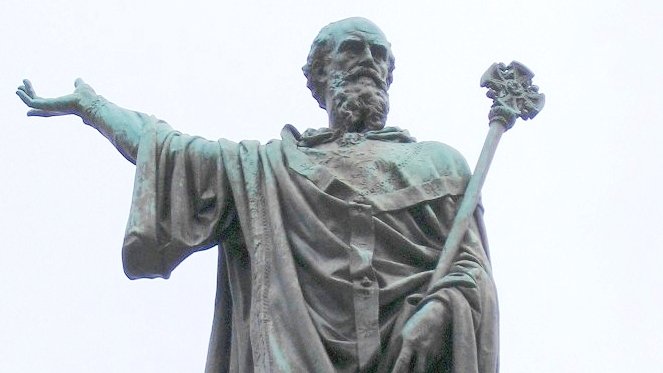 One of the greatest popes of all time, was born nearly 1000 years ago, in 1035 A. D., at Châtillon-sur-Marne, in the Kingdom of the Franks, to a noble family of knights and warriors who dominated that countryside.

Moved by the grace of God, in his youth, he forsook the easy life of a diocesan priest, with promises of being a local Bishop, and gave up this world and became a humble son of Saint Benedict, at the famous Monastery of Cluny, nearby.  Cluny was one of the leading religious communities in the Church. Founded nearly a century ago by Saint William in the remote forests, it grew to be a great center of monastic life, on account of the zeal and devotion of its monks and that it was free from all Feudal obligations of tax, tithe and service.

So talented and devout was Odo de Lagery, that he was chosen Prior of Cluny some time before 1046 A.D., as I estimate it. And as such he received a guest that would forever change the history of the world. I speak of  Saint Hildebrand

Hildebrand was an Italian. The son of a blacksmith in southern Tuscany. He had been a guest-student at the Benedictine Monastery of Tre Fontane in Rome, and had attached himself to the retinue of the man he thought was the pope, John Gratian, reigning under the name of Gregory VI  However, at the Council of Sutri in 1046, Gratian was deposed for the crime of having obtained the papacy by simony. At the time his acolyte, was but 16 year of age, and so when he went into exile he took the young Hildebrand with him.

Gratian died shortly afterwards, and Hildebrand, finding himself in Burgundy sought out the Monks of Cluny for lodging, perhaps having nothing to live upon and no where to go, as the former acolyte of an Antipope. But Prior Odo took him in for several weeks. Whereupon he left and attached himself to a Bishop in Burgundy, who was close friends with the Monks of Cluny: Saint Bruno of Egisheim, Bishop of Toul, who at the Diet of Worms late in 1048 was elected as Pope Leo IX.

Years later, after battling against simony and the abuse of lay princes in nominating Bishops, Saint Hildebrand, himself was raised to the Apostolic Throne, in April of 1073, and took the name, Gregory VII: he went on to become one of the top 10 greatest popes in history, and certainly the greatest of the Middle Ages for his unswerving zeal for the liberty of the Church of Christ.

Seven years later, Gregory VII named Prior Odo, Cardinal Bishop of Ostia, and in 1084 made him Apostolic Legate to the Holy Roman Empire. He was so trusted by Saint Hildebrand, that the Saint named him as one of the three men that should succeed him. Blessed Odo was the third, in that succession, and became Pope at Terracina, on March 12, 1088. 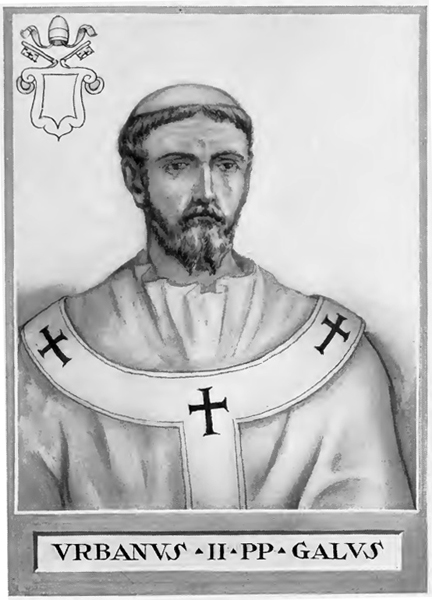 He took the name Urban II, recalling the Saint and Martyr by that name who reigned on the See of Peter at the beginning of the Third Century.

But Pope Urban II did not inherit a Church at peace, for in the strife which reigned between Pope Gregory VII and the German Emperor, the Emperor had descended to Rome in 1084 and set up the Antipope Clement III who had reigned there firmly ever since. So from day one, Bl. Urban II had to contend with an Anti-pope.

It is to be noted, that the mere fact that an Antipope controls Rome is NO OBSTACLE for the Church of Rome to elect a successor to the true Pope.

Many a man, and many a pope, would have run away or become so totally obsessed with the bad position in which he was in, as to take ineffective measured and let the Schism go on. But not Bl. Urban.

He traveled Italy — staying away from Rome — and held Councils at Amalfi, Troia and Benevento, condemning the Antipope and restoring ecclesiastical discipline with those Bishops who were favorable to true reform and renewal. Ancient canons were re-established, guilty clergy were punished and expelled. He assisted faithful Catholic nobility and clergy throughout Western Europe by sound counsel and decrees. He was ever open to holy suggestions.

Upon the mountain of merits he had accumulated, God sent him the answer to his troubles which he never foresaw.

This answer began with a man called Peter the Hermit. It is not clear if he was a hermit or simply a priest of Northern Francis with that surname. Inspired by love of God he had traveled to the Holy Land on pilgrimage in 1093-4 and found himself in the spring of 1094 praying one midnight in the Holy Sepulcher, where Christ was buried and rose from the dead. There, he had a vision of Christ Crucified who commanded him to speak with the Greek Orthodox Patriarch and call upon the Bishop of Rome to call upon the Men of the West to liberate the Holy Land from the cruel yoke of the Muslims under which it had labored for centuries but, very heavily in the last 60 years. Peter complied, and the Patriarch wrote the Catholic Bishop of Rome asking for help.

Peter met Bl. Urban at Bari, in Apulia, in the fall of 1094, and traveled with him to Piacenza, in northern Italy, in March 1095, where the Greek Orthodox Emperor of Constantinople renewed the call for military assistance. Bl. Urban had met his destiny and eagerly responded.

He went to Clermont, France, where he had summoned all the Bishops of the West, and on the 27th of November of 1095 gave a speech which changed the history of the world: for he called on the Catholic knights and noblemen present to lay down their arms against their brothers in the faith and take them up in a penitential pilgrimage to Jerusalem to free it from the infidel. — The crowds were so moved with fervor at his speech, that they shouted out DEUS VULT!  God wills it.

Bl. Urban II died on July 29, 1099 A.D., fourteen days after the Catholic Forces of the First Crusade had captured Jerusalem, in a military venture which was so unexpected and miraculous that all historians since have spoken of it and tried to explain it. The Crusaders took the city because the True Pope had called them and promised them victory. And God granted it, because Urban II and not Clement III was His Vicar on Earth.

The First Crusade was followed by 9 others, and they forever changed Europe, because they opened the Catholic World up to the idea of bringing the Gospel to all the Earth and defending the rights of Christians everywhere against the forces of unbelief. For this reason, Bl. Urban is the most hated pope by all the enemies of the Church, inside and outside the Church. But should be the most beloved by all who truly love the true God.

Bl. Urban had the consolation in seeing his rival also driven from power in 1097. Because one of the many Crusader contingents, passing through Italy on the way to Jerusalem, drove the Antipope from Rome and re-established the authority of the true pope.

The moral of the story is, be generous with God and He will be generous with you. And all take heart and be of good cheer, because all the Providence of God is at the back of those who support the True Pope!

CREDITS: The Featured Image is a photo of the Statue of Bl. Urban at the Place de la Victoire, Clermont-Ferrand, France, and is used here according to the Creative Commons Share-Alike 3.0 unported license described here. — The sketch of Bl. Urban is by Artaud de Montor, see here for more info.