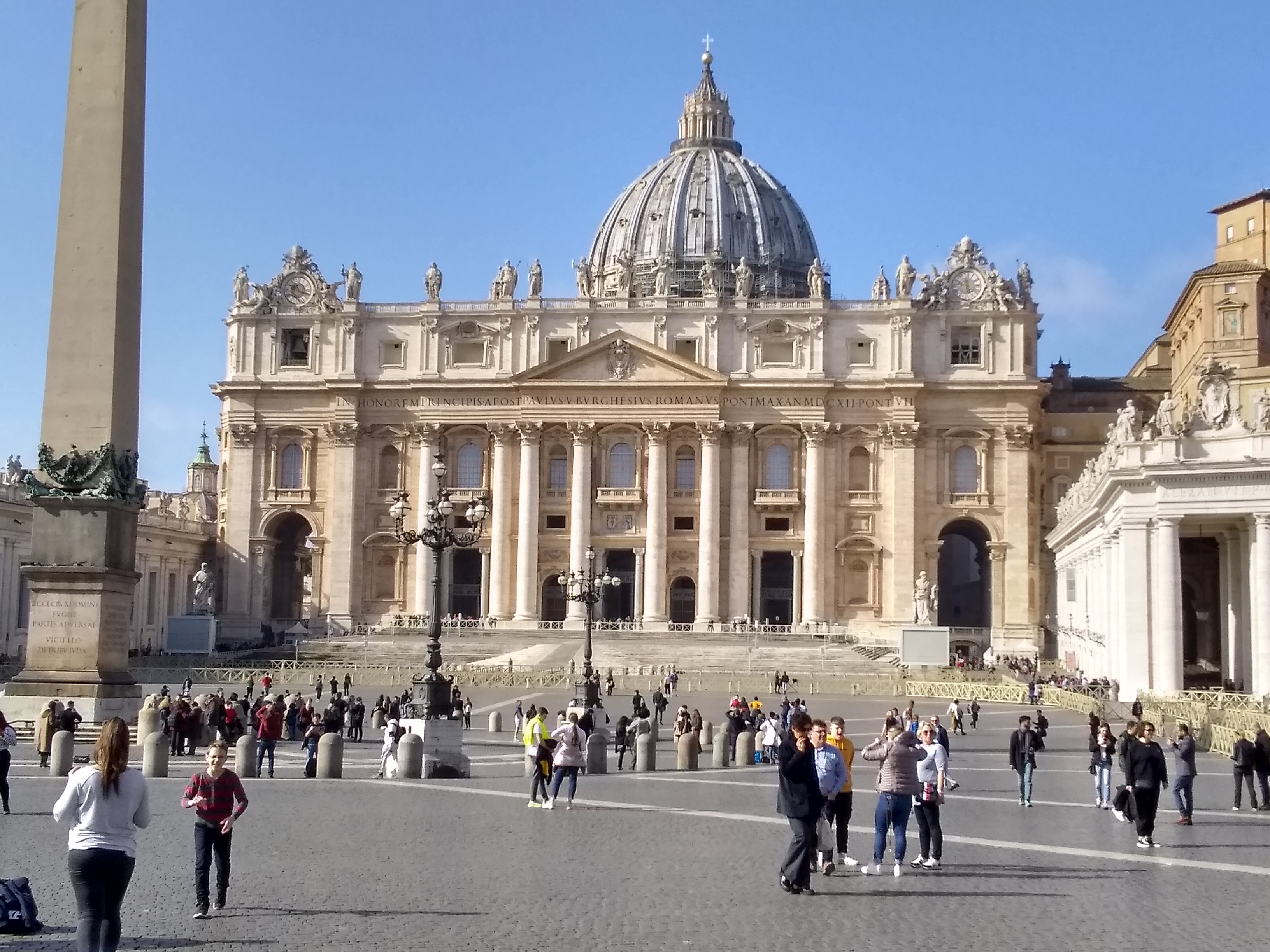 Rome, Italy: Feb. 11, 2020: The title of this report is as incredible as it sounds. For almost seven years Jorge Mario Bergoglio has done everything he can to insist that Italy accept illegal immigrants from whatever nation they come and that they should not be expelled. He has strongly criticized the efforts of Matteo Salvini, in his former capacity as Minister of the Interior, for his efforts to stem or prevent illegal immigration.

But this morning, in the Vatican Territory, it appears that the Vatican Secretary of State requested the detention and arrest of my person. I was detained at 11:40 A.M., after having had my identification papers requested on Vatican soil, almost as soon as I entered the Piazza of San Pietro around 11 A.M..

I did happen to meet one of the Vatican Reporters for the Associated Press, who wanted to interview me, but on account of being taken away for questioning — they said — my interview never happened. The AP reporter admitted being told that her sources were of the belief that something big would happen on the 7th Anniversary of Pope Benedict XVI’s Declaration.  I wanted to be at the Piazza of St. Peter to meet with other Catholics who were concerned about the treatment of Pope Benedict, the invalidity of his renunciation, and his effective imprisonment.

For this reason I was not able to interview more than one Italian, Massimo Testarotta, who had come for the event, Grex Vocum. I interviewed him and the AP reporter co-recorded the responses. He had traveled all the way from Trieste, Italy.

Here is his interview, in Italian:

Following this interview, I feared I would be arrested since my passport was refused me. I was told that I was not being arrested or detained or questioned, but in American terms that is just was happened. I was threatened with worse if I refused.

I did not expect that the Vatican would attempt to have me dragged off physically. I was told that if I did not come willingly, a police car would be called and I would be taken away in hand cuffs.  I was never told my crime. I was told they only wanted to question me.

Not being an expert in Italian, the kind gentleman whom I just had interviewed for FromRome.Info Video agreed to be my translator. As I left, the AP reporter was totally shocked. Another reporter was also present. They could not believe it. I was brought to another location, which I cannot identify without being accused of the crime of defaming the police who took me into their company!

I was eventually released at about 1:48 PM, about two hours later.

The 2 hours was a grueling cross examination and series of accusations which they wanted to charge me with.

The first attempted charge was that I was an illegal alien without a visa to enter Italian Territory. How you can be arrested in Vatican Territory for violating Italian Law is something they did not explain. Though one officer told me that when the Pope is not in the Piazza S. Pietro, the Piazza is not Vatican Territory. — I told him he badly misunderstands the borders of the Vatican City State!

The penalty they wanted to impose upon me was 3 years of exclusion from Italy. They made this accusation even though they had MY ITALIAN PASSPORT verifying that I am an Italian Citizen ex iuris sanguinis, with the right to remain in Italy perpetually!

Only after insisting that the first charge was false, did they drop it.

The next charge to bring against me was that I was a vagabond, without residence. But they could not find any law to make that a crime. You see, if you are not the right kind of poor person, Bergoglio wants you arrested!

Then they began a long disquisition with me through my translator, accusing me of being a “Frate”. I asked them what they thought that word meant and they could not give me a coherent reply. So I wrote out 2 pages to explain what a Friar is and why some could say I am but other that I am not, since the term is not defined in Canon Law, and that some Franciscans use the term, but others do not and that some Franciscan communities do not want others to use the term and some do not. They seem consternated in my lengthy and legal reply and so would not accept my written statement — which I believe totally exonerated me from the trumped up charge.

And so they proceeded to another accusation.

The third charge was that I was attempting to defraud others by presenting myself in the clothing of a Catholic Priest. They explained to me what they thought was a catholic priest and what a catholic priest wears. They were so wrong, I had to laugh. They thought a priest was anyone who took vows, and that all Franciscans are priests, and that the Franciscan habit was a sign of being a priest and that all Franciscans are official representatives of the Catholic Church! What can I say! They thought my Franciscan habit was a priest’s cassock!

I asked if any had studied Church Law. They said no. I asked if anyone could bring me a copy of the legal code they were accusing me of violating. They refused. Mr. Testarotta used his cellphone and showed me. I asked for a lawyer to advise me at least 3 times, they refused to procure one for me. I told them I did not know how to respond to their accusations without legal advice.

I looked at the article in the Penal Code which I was being accused of violating, and it said nothing about how I dressed, nor did it define its terms. So I said to them, through my translator that they were accusing me of violating what they thought is the meaning of words in the Code which the Code itself does not define. So what they are accusing me of is violating what they think the law is. Their response I do not remember. I asked how I can reply to the accusation if they do not define for me what I am being accused of. Evidently that is my problem. I think they told me to tell it to the judge.

So they charged me with impersonating an official representative of the Catholic Church. They did not say to whom I made this impersonation or when. They evidently thought that if they think I am such a representative, that I am responsible for their mistaken thoughts and judgement. — This is a whole new category of thought crime, being responsible for the thoughts of the police!

I made a short statement about my consecrated life as a Franciscan brother observing the Rule of Saint Francis. They said the Court will not contact me about the matter, because I have no address, but that in 30 days I have to present my defense. The ultimate penalty would be a fine of up to nearly 900 Euros or a thousand dollars. I told them as a son of Saint Francis I have no money and can not pay a fine. One of them ridiculed me, implying I was a liar.

Finally, they complained at the end of having wasted so much time with me, and I said I hoped they were being well paid by the Vatican Secretary of State. I am convinced the Vatican Secretary of State was involved because during the questioning which was not questioning, I saw them with a page printed out some days ago, of the website of an organization they wanted to accuse me about for some reason, and which had nothing to do with my presence in the Piazza San Pietro. It seemed about a week old, printed on a low quality inkjet printer. I was folded 4 times to stick in a pocket and hide away.

This is the sad state of affairs at the Vatican. Police harassment of journalists to prevent them interviewing anyone who might criticize the Argentine! — Does anyone think any longer that Pope Benedict XVI is not at all a prisoner?

I personally ask everyone who has faulted Pope Benedict XVI for being silent for 7 years to apologize publicly. I hope you can see now what happens to you if you even want to hear someone criticize Bergoglio on Vatican soil. I also think that what happened to me today proves:

LET US PRAY FOR POPE BENEDICT. What I suffered today is not even a drop in the Sea of Sufferings which he has had to sail on for 7 long years!

I thank God for the opportunity to taste the suffering the true Pope is enduring, and I beg all to pray for the Pope’s liberation!

Please share this post with all clergy, bishops and Cardinals you may know. I believe that my treatment on the occasion of Grex Vocum — the mere desire of Catholics to express their rights in accord with Canon 212 — shows the Vatican is totally out of control and is NOT in communion with the Catholic Church, for to reject Canon Law is to rebel from the Church, and that breaks communion in the most grave way.

CREDITS: The Featured Image is a photo of Saint Peter’s Basilica taken by Br. Bugnolo this morning at the Vatican.

25 thoughts on “Vatican attempts to expel Italian Citizen from Italy as an Illegal Immigrant!”