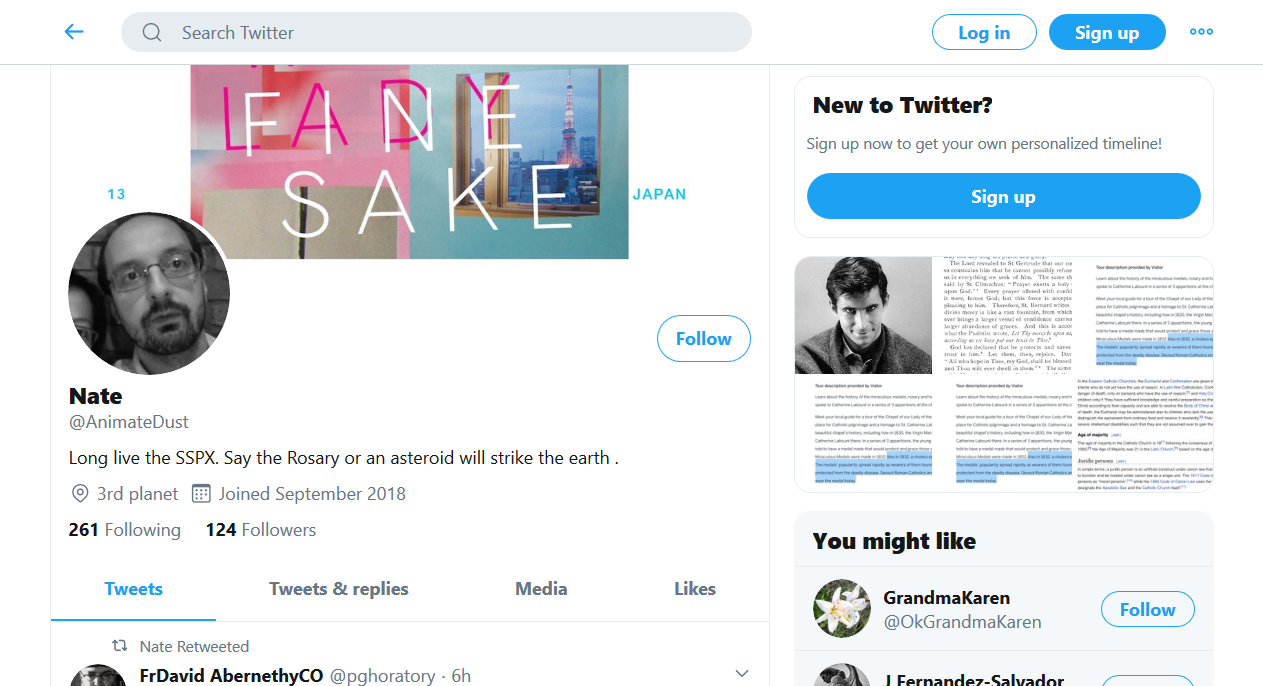 There is no greater praise a man can receive from his enemies than to be classified as a worker of the devil for having remained faithful to Christ. Just as Christ healed the sick and was condemned by the pharasees as a fraud and charlatan, in league with the Devil, so the “Bergoglio is certainly the Pope” crowd, ever eager to imitate their false shepherd, proceed to descend downward….

Here the latest. If it were not a tweet but something physical, I would keep it as a trophy:

Those who are so lost in the errors of modernism, that they think that reminding everyone of the moral obligations of remaining in communion with the true pope — obligations solemnly decreed by Pope Boniface VIII in Unam Sanctam — are doing the devils work, are so lost that they call good evil and evil good, smug in their own self righteousness, which finds its categories of sin out of the wantonness to agree with the mass of those in error and the complete repudiation of the Papal Magisterium as regards communion with the pope and when a pope resigns.

I pity them. And I pray for them.

Preaching moral obligations does not divide people, unless some of them refuse morality and others accept their obligations. To say otherwise, you would have to condemn the Apostles for founding the Church, because the preaching of the Gospel has ever been a source of division, as Christ said. I am honored to be insulted along with Them!

The International Association “Veri Catholici” is not mine nor controlled by me. If you find the truth offensive, that is your problem, but I can assure you, that you will continue to hear the truth from many voices, and not just mine. However it is true that the very long campaign to destroy the reputation of the Association and of myself by members of the “Bergoglio is certainly the pope” crowd does not convince me that they are of God. Because Christians do not act like that. — Grow up, be men, and stop replying to invitations to dialogue by hurling childish insults, as you only make yourselves look like idiots and boors.

Veri Catholici is the international Association of Catholics founded in inspiration of the call by Bishop Athanasius Schneider to oppose the monstrous implications of Amoris Laetitia and remain fast and loyal to the eternal faith. It includes more than 3000 Catholics from around the world, who show their adhesion to the association by following Veri Catholici on Twitter or via wordpress, through their website. — They are the only association dedicated to removing Bergoglio from power and restoring pope Benedict, not because of any other reason than that the teaching of the Church requires that we remain in communion with a true pope and drive heretics out of the Church. Veri Catholici is hated, therefore, by all who love to compromise. That is what makes it such a great and truly Catholic organization.

CREDITS: The Featured Image is of the Twitter Profile Page of Nate, used here in accord with fair use standards for editorial commentary.