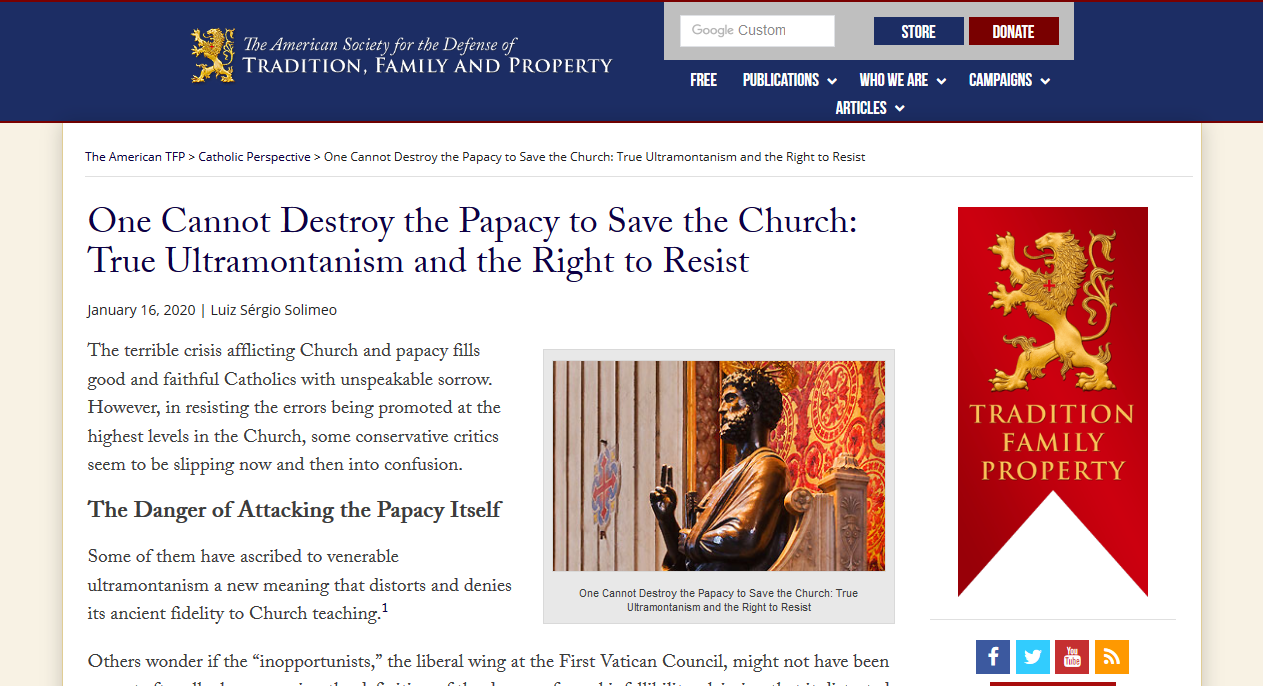 I want to thank a faithful reader of FromRome.Info for sharing with me an article which I had not seen, published on January 16, 2020, by the American Society for the Defense of Tradition, Family and Property (TFP for short), by Luis Sérgio Solimeo, entitled, One Cannot Destroy the Papacy to save the Church: True Ultramontism and the Right to Resist.

It’s a very Catholic article and well written and researched by a man who knows his history of the Church. And it appears that his immediate purpose in writing is to counter the insane course of Trad Inc. which has begun to doubt the very Faith of the Church in the papal office, its powers and its prerogatives. And I praise him for that.

However, though he appears to be an authentic Ultramontanist who upholds the rights and privileges of the Papacy, he seems to be ignorant of Canon Law or unwilling to uphold THE LAWS OF THE PAPACY ABOUT THE PAPACY.

Because he keeps calling Bergoglio the Pope and he says that its is the critics of Bergoglio who are causing confusion!

What about Canon 332 §2, which says a Roman Pontiff resigns when he renounces the Petrine Munus? Period.  What about true loyalty to the Pope on Feb. 11, 2013. Did that not include resisting the wrong and unauthorized interpretation put out by the St. Gallen Mafia, who said that Pope Benedict XVI had resigned the Papal Office?

You have to scratch your head about the mental gymnastics which are necessary to write such a fine article on loyalty to the papacy, SO AS TO CONVINCE YOUR READERS TO GIVE THEIR LOYALTY TO A FALSE POPE and refuse it from a TRUE POPE.

Because who really is destroying the Papacy? Is it not Bergoglio? And what is the most destructive thing one can do in regard to the Papacy, if not refuse the true Pope and adhere to a destroyer?

I think everyone who is in the TFP Movement needs to ask their leaders what is going on? Has the TPF movement from Brazil fallen in with the members of the House of Rampolla del Tindaro, who have worked for more than 100 years to destroy the Church from within? — If so, they better jump ship quickly before they start being forced by their leadership to worship Pachamama.

CREDITS:  The Featured Image above is a screen shot of the page where the Article at TPF appears, and is used here in accord with fair use standards for editorial commentary.