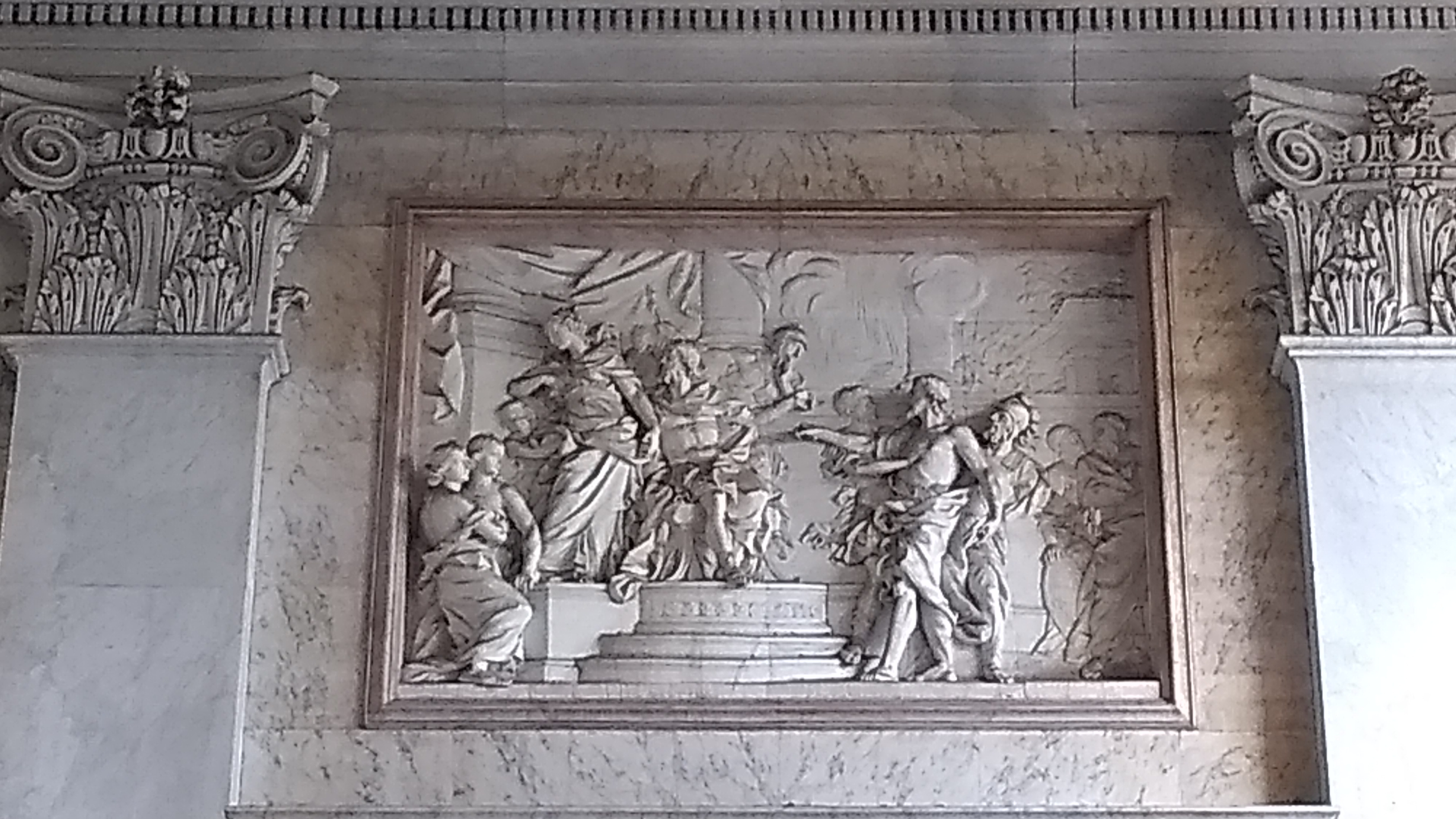 I love a good debate, but it’s disappointing to see one side with no arguments. It’s even sadder to see grown men attempt to craft an argument from an assertion which does not fit the case. It’s like someone claiming the world is flat, because ships disappear partially and totally as they head off the horizon!

Anyone with the slightest conception of three dimension geometry knows that that argument proves the world is not flat!

Just so the latest refuge of the “Bergoglio is definitely the pope” crowd. And such it merits a refutation, although I hate knock outs, there is nothing dramatic in them.

Except that is not an argument. That is an analogy or comparison.

An argument, for anyone who knows logic, has a major premise and a minor premise and a conclusion. When you put your thoughts into arguments, then you can see immediately whether they are valid or not, because the human mind has a natural capacity — when not being forced by bad will — to see the truth.

So let’s do the homework of the opposition, and put their analogy into logical form:

Major premise: Every juridical act must be presumed to be valid unless judged otherwise by a legitimate court of law.

Conclusion: Marriage vows are to be presumed valid unless judged otherwise by a legitimate court of law.

So let us imagine that Johnnie is doing his homework and shows this to Mommy, who happens to have a Ph.D. in Logic and a J.C.D. in Canon law. (My hypothetical is obviously contrary to fact).

MOMMY: Johnnie that is wonderful. But you are not finished yet. Your conclusion has to be about Papal renunciations, not marriage vows.  Perhaps use another syllogism which combined with the first, will arrive at the right conclusion!

And Johnny goes to work.

Major premise: Every juridical act must be presumed to be valid unless judged otherwise by a legitimate court of law.

Minor premise: A Papal renunciation is a juridical act.

Conclusion: Every papal renunciation must be presumed to be valid unless judged otherwise by a legitimate court of law.

And Johnny shows his work to Mommy.

MOMMY: Johnny, now you have the correct conclusion, but the weakness in your minor premise.

JOHNNY: How is that Mommie?

MOMMY:  Because in accord with Canon 332 §2, a papal renunciation is only a juridical act if it is a certain kind of act. Otherwise it is an actus nullus, invalidus or irritus.

MOMMY: The kind which is a renunciation of munus.

JOHNNY: But that is what the whole controversy is about.

MOMMY: Are you trying to resolve the controversy or just trying to make it look like you won! Remember what I told you about growing up. You have to stop with the juvenile — I am right, shut up! — behavior which got you that bloody nose last year in elementary school.

JOHNNY: This home work is too hard!

MOMMY: I want to encourage you, Johnny, but the major has a problem too.

JOHNNY: What is that!

MOMMY: Your argument does not say why a juridical act is presumed valid, or why an act of matrimony and renunciation are the same species of act.

MOMMY: Well, Johnny, I cannot do your homework for you! — But I will help by asking questions, ok?

JOHNNY: That something is pre-existing.

MOMMY: What is pre-existing between a married man and his wife?

MOMMY: What is pre-existing in a Papal Renunciation?

JOHNNY: The papal vows, that is, the agreement by the man who is the pope, to be the pope.

JOHNNY: The pope’s decision to be and remain the pope, of course!

MOMMY: That is right!

JOHNNY: But, Mommy, that is not the conclusion I want to present in class, because I hate Annie and Alexie and Marky, who are all supporting that side of the argument!

MOMMY: Johnny, what did I tell you about being juvenile?

A Real Case that is not a Real Case 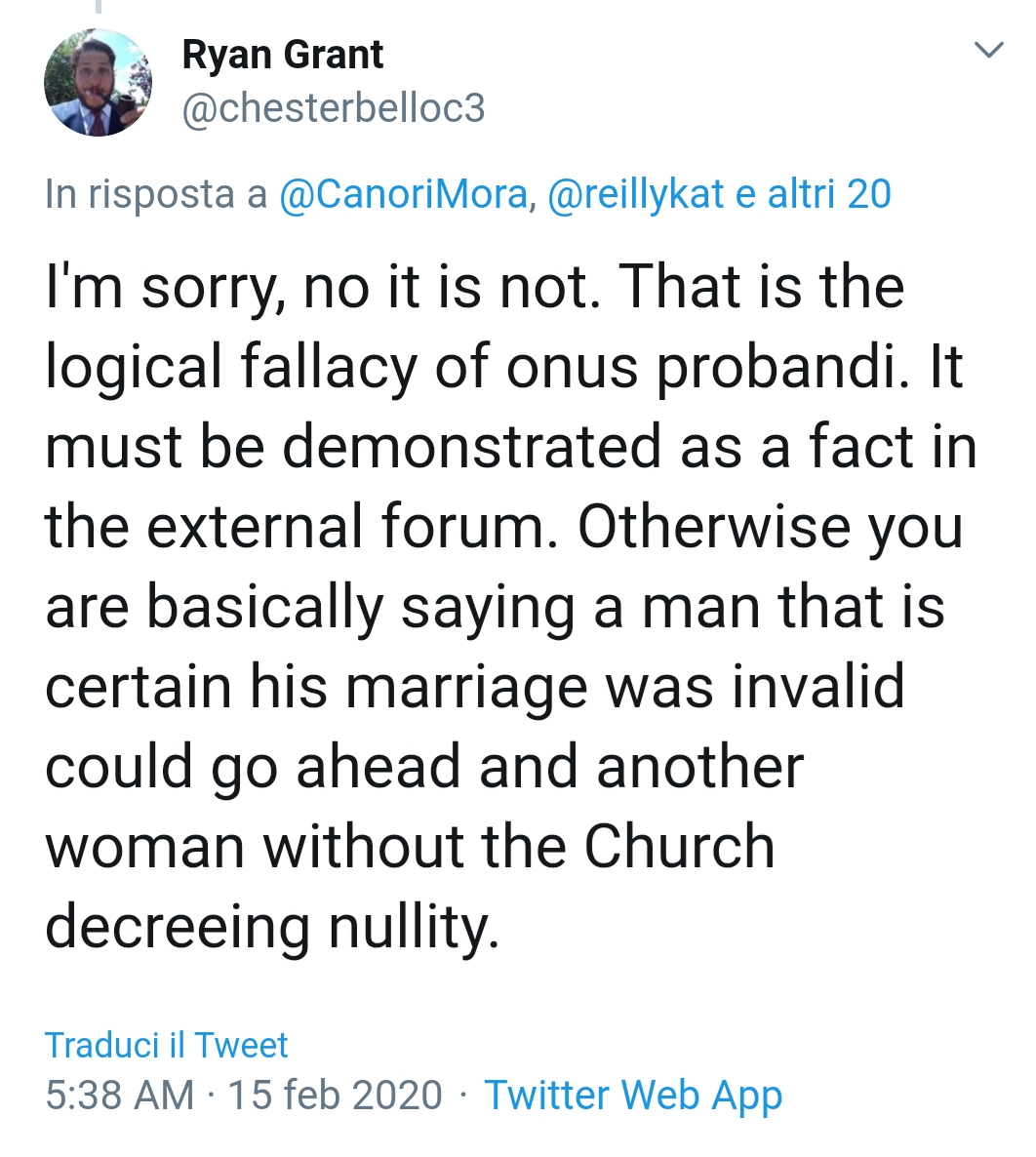 The problem with the argument used in the Tweet shown to the Left, is the same.

The more fundamental legal principle which is the Major Premise of all arguments in this matter is that the cessation of power or of right is not presumed. Therefore, it has to be proven and juridically established. Otherwise, you are saying that a man who is certain in his own opinion that the marriage he entered into before Church witnesses, is invalid, can act as if his marriage never existed,* when he is thus certain, without first obtaining an annulment, if he is even eligible.

Likewise, in regard to the Renunciation, you would be saying as Grant seems to be saying, that a man who is certain in his own opinion that the Renunciation ended the holding of the papal office, can presume the man is no longer the valid pope, when he is thus certain, without first obtaining a judgement of the Church. But that contradicts the principle ‘the cessation of power and right is not presumed’.

Canon 332 §2 is the only authority and tribunal of that certitude. Grant wants it that it be the Cardinals or Bishops, or the agreement of everyone alive or of his friends, like Steve Skojec. But that is expressly denied in the final clause of Canon 332 §2.

But there is a deeper problem with Grant’s approach. And it is this: matrimony is a Sacrament not simply a contract ad libitum, voluntarily separable as much as enterable. As a Sacrament it can never be broken. Those who enter into it have the power to enter, but no one has the power to end the contract, except Sister Death. But the Papacy is not a contract, but it is severable. A man accepts his election according to the norm of law, and can be separated from what he accepted according to the norm of law.

But it has to be according to the norm of law. Otherwise, a pope might accidentally un-pope himself after drinking too much wine, during a fever, while being threatened with death, or after being convinced his health is so bad, by those around him, he cannot go on for another seven years. — And it must be according to the norm of law, not according to the opinion of men. Otherwise, you would have anti-popes elected when popes still lived, simply because Cardinals wanted it so. And nearly all anti-popes in the last 1000 years were caused by wanton Cardinals.

Something sounds familiar about that…if you have eyes to see.

* The case of the marriage that never was, but was ratified in Church and is presumed in law to be valid, is a bit more complex. Though there are cases in which a marriage might be objectively invalid, but sanable, that is, able to be made valid — e.g. your wife did not get an annulment prior to marrying you and concealed this, but was eligible to get one. However, if there is objective verifiable cause that the marriage is invalid, and contrary to divine law — e. g. you discover that your wife was adopted and that she is in fact your sister — then you must cease to cohabit with her. So there are cases of invalidity which can morally oblige one to sever marital relations in fact, privately at least, until an annulment is obtained, though there is no case in which one can proceed to act in the external forum as an unmarried spouse with liberty to engage another in a romance or marriage, prior to such an annulment regardless the cause, on account of the obligations of all parties to obedience to the Church, justice, modesty and humility as well as avoiding giving scandal and harming the reputations of others.

CREDITS: The Featured Image is a photo of a bas-relief at the Lateran Basilica, taken by Br. Bugnolo