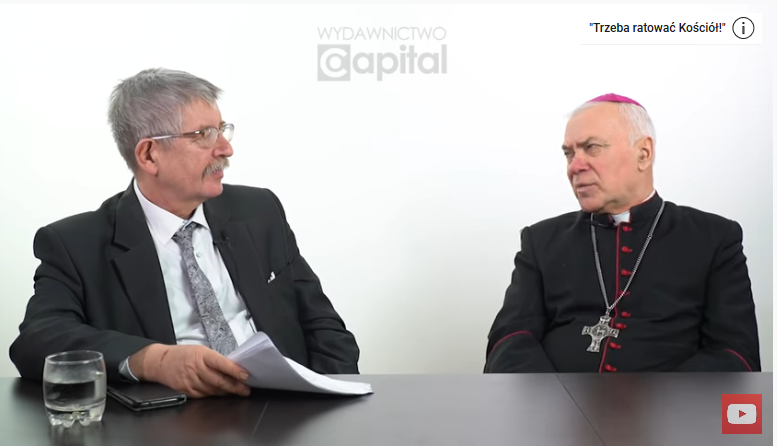 Arcbhishop Jan Pawel Lenga is well know for his denunciation of the agenda of Bergoglio as masonic. FromRome.Info republished his letter the other day about this.

To his credit, the Archbishop is back in the news, this time on Polish TV where he has openly condemned both the project to undermine priestly celibacy by Bergoglio and to approve sodomy by the German Episcopal Conference.

In response, the spokesman for the Polish Bishop Conference publicly denounced the Archbishop. The news hit TV in Poland, last night:

The condemnation was issued on January 22, 2020. Here is an English text of the translation by our Polish correspondent:

In connection with the discussion on the archbishop’s statements John Paul Lenga, I remind you that Archbishop Lenga has never been and is not a member of the Polish Episcopal Conference. I informed about this in the Więź quarterly (Autumn 2019, 3 [677]). Statements of Archbishop Therefore, Lenga cannot be identified with the Polish Episcopal Conference. They cannot be treated as positions of Polish bishops.

It is regrettable that Archbishop Lenga appears in the media and misleads the faithful.

I would like to inform you that Archbishop Lenga does not represent the Catholic Church in Poland.

In the Video above, Archbishop Lenga replies to the charges, declaring his upmost fidelity to stay faithful to Christ, after the example of the path Saint John the Baptist took. Today’s path to Christ is difficult to take because it is overgrown (by weeds). However as Saint John gives us example, so the Archbishop wants to pave the path to Christ for the faithful… He doubts the above statement represents all Bishops in Poland, as some might be afraid to voice their opinion overwhelmed by fear of political and religious correctness. He clearly undermines the worldliness and cowardice of today’s Bishops The argument against Abp Lenga stemming out of the official statement is that by speaking publicly he falsly and illicitly represented the Polish Bishops. His reply is that when a Bishop speaks individually, he has the right and represents himself not the conference.

Archbishop Lenga is fluent in Polish, but is the Archbishop Emeritus of Karaganda, Kazakhstan, whose episcopal lineage traces back to the great Saint Pius X.

This is not the first time the Polish Bishop’s Conference has attempted to smear the Archbishop with such pubic statements. It happened before, when he talked about Masonry in the Church in 2017.

CREDITS: The Featured Image is a screen shot of the video, used here for editorial commentary. The text in Italics and quoted indenture is from our Polish Correspondent who wishes to remain anonymous.