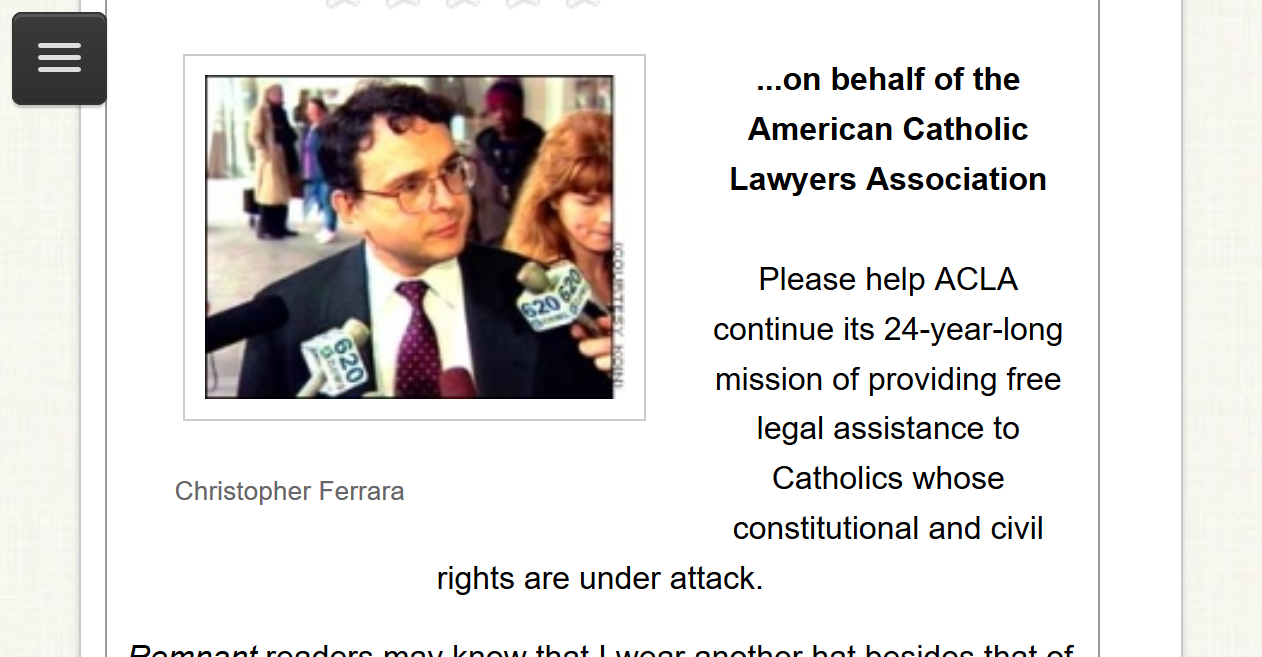 In recent months, the traditional Catholic Attorney, Chris Ferrara, has come out strongly against those who judge that Bergoglio is a heretic or that Pope Benedict is the pope, basing his position that private individuals have no authority to make determinate judgements on the matter.

His arguments are vague, in my opinion, so I will simply rebut here the general errors which it appears he seems to appealing to.

First, it strikes me as completely absurd that an Attorney-at-law should demand that everyone who knows of a notorious public crime and about which crime the evidence is manifest, public and equally notorious, should shut up and stop making pronouncements about guilt or innocence.

Even Chris, I think, has not been retained as counsel for the defense by any party involved. And as far as I know he has not been appointed a judge on the Roman Rota or the Apostolic Signatura — the highest courts in the Catholic Church, which however, do not have the competence to judge cases of failed papal renunciations or papal heresy.

So where does Chris get the idea that we or he should be impartial and await judgement from such future tribunal? Does he think Bergoglio is not a heretic? If so, why not say so.

And since such matters can only be judged canonically in a Synod or Council of Bishops, Cardinals or the clergy of Rome, where does he get the idea that all who might attend such a Council or Synod have to be impartial beforehand? Or that those of us who want such a meeting to take place have to be impartial?

Does being impartial now mean being honest and just in Attorney Ferrara’s mind? Or is Chris letting his habit of mind, as a defense counsel, inhibit his exercise of the virtues of faith and justice in regard to the solution of the Church Crisis?

I agree, Chris, that we are not the final arbiters of the canonical settlement which will put the Church back in working order. But I have to ask you, why you are acting like a Judge on the Roman Rota? Are you merely parroting the arguments of some former occupant of such a position

Please explain to the rest of us then, since you have taken such a position, why you take it!

Second, I would like to publicly ask Attorney Ferrara what purpose or effectiveness does he see in lamenting the problems on a weekly basis in his published editorials, but NOT seek a canonical solution to them? And why is it that he writes article after article about the problems in the Church if he seems so adamant about telling those who want corruption removed — like Ann Barnhardt — to shut up? Simply because she does not lament to lament, she decries and demands justice be done?

He is renowned for seeking justice for Catholics in U.S. Courts. As a Catholic, Chris, do you not feel the slightest tinge of obligation as an attorney with such a reputation, to demand, call and advocate for all Catholics to have a real solution to the problem? — Yes I have seen your public comment that you think Catholics have a right to call for such a solution. BUT why is it that YOU are not calling for it?

Third, as a Catholic and a citizen journalist, I want to ask, you, Chris, a public question? Are you acting under counsel or orders from Cardinal Burke to stifle any move by Catholics to call for the intervention of the College of Bishops and, or, the College of Cardinals to investigate the problems with the Renunciation or with Bergoglio being a heretic? And if so, what reasons does he give for such counsel or order?

If you think Chris should answer these questions, you can hear him speak and perhaps get a question in at the Keep the Faith Conference on Feb. 22, in Monterey, California, USA. For more information see: https://keepthefaith.org/conferences/

CREDITS: The Featured Image is a partial screen shot of an Appeal by Attorney Ferrara for his Catholic Lawyers Association which provides free legal counsel to Catholics who are being persecuted for their religious expression in the USA. As such Attorney Ferrara has done some marvelous work defending the Faithful against injustice. Image used here in accord with fair use practice for editorial commentary.

7 thoughts on “Does Chris Ferrara think he is a judge on the Roman Rota?”