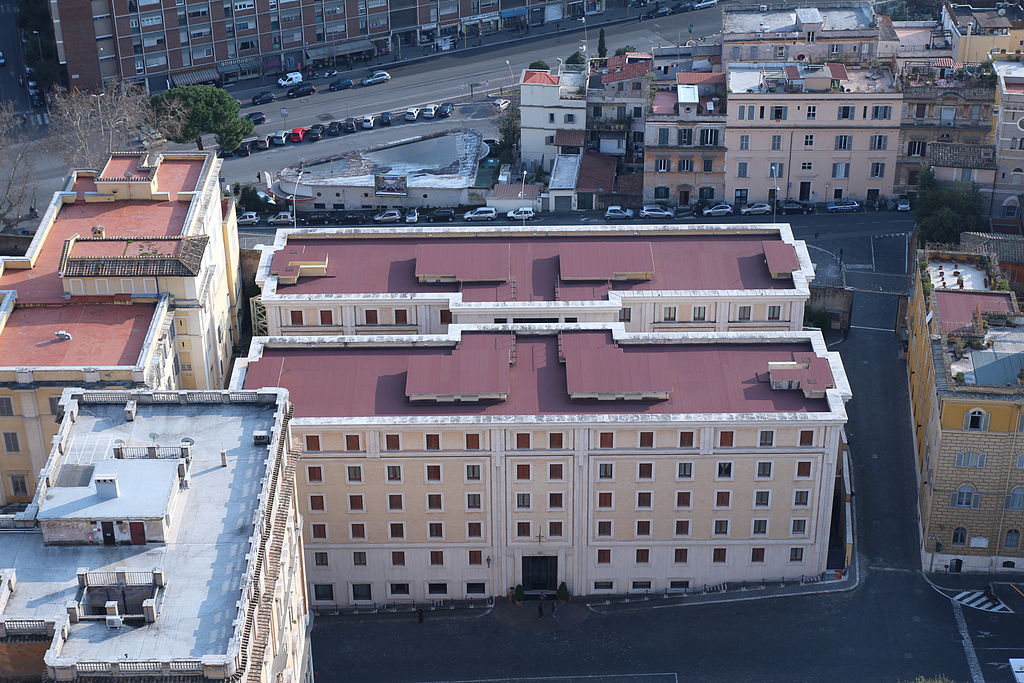 In the Featured Image above, you see the Domus Sanctae Martae, the current official residents of Jorge Mario Bergoglio at the Vatican. It is positioned at the very southern border of the tiny City State, next to the Via dei Cavelleggeri, at the top of the photo.*

The Domus Sanctae Martae was built by Pope John Paul II during the years 1992 to 1996. Its construction was controversial since the new 5 story building blocked on the only existing lateral view of the Basilica of Saint Peter, and cost the life of one worker. Construction costs were $20 million US dollar equivalent.

According to the Papal Law on Papal Elections, Universi Dominici Gregis, published in the same year of its completion on Feb. 22 — just four days from now — Casa Sancta Marta became the official and required residence of the College of Cardinals during a Conclave.

After being proposed to the world by the Cardinals as a new Pope, on March 13, 2013, Jorge Mario Bergoglio — who took the regnal name of Francis — returned to the residence where he had been staying as a Cardinal Elector. At the beginning he was hailed as humble and poor for returning to a single room. Later he slowed asked those on the same floor to move out, and took over the entire floor.

However, one cannot escape to notice, if one has a legal mind, that by remaining in the Casa Sancta Marta he has made it impossible for Cardinals to gather in a Conclave during his lifetime. A Conclave, say, to elect Benedict’s legitimate successor, if, God forbid, Pope Benedict XVI died before Bergoglio.

There might be more meaning in that, than has been supposed.

Contrariwise, Pope Bendict XVI lives at the Monastery Mater Ecclesiase, at the center of all things in the Vatican, at the heart of the Vatican Gardens.

* Not one hundred yards away are stores run by Muslims who sell bottles of liquor in the shape of male private parts, in open view, behind the cash register: a fact which one finds inexplicable if one knows nothing about what is going on in the Vatican these days.

CREDITS:  The Featured Image is of the Casa Sancta Marta, photo by Johannes Muller, and used here in accord with a Creative Commons Attribution Share-Alike 3.0 unported license, as described here.

3 thoughts on “Did Bergoglio know his election was invalid from Day 1?”