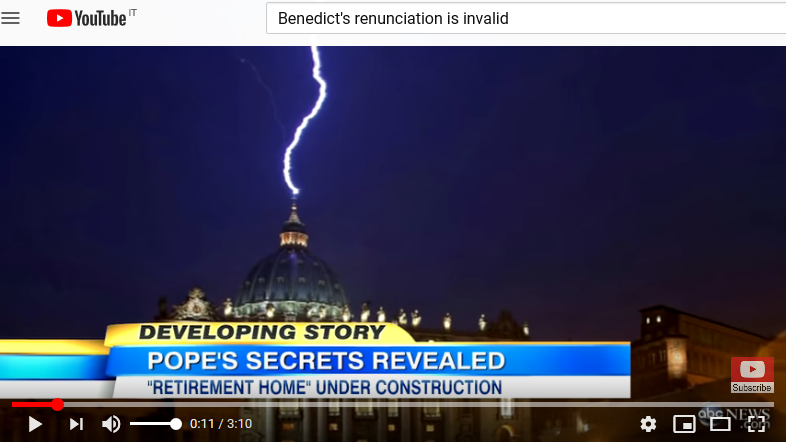 A lot of information about what happened in 2013 merits to be look at again, with an impartial eye. Here is just one report, filed by ABC News on Feb. 12, 2013, the day after Pope Benedict read his Declaratio:

There is something stunning in this report, namely, that Pope Benedict had the Monastery Mater Ecclesiae restructured for months prior to his Act on Feb. 11, 2013, with the intent never to leave the Vatican. His brother is also interviewed as saying that the Pope was prepared months in advance and well thought out his act.

As a side matter, it says that Pope Benedict XVI had a pace maker installed in his heart, in the Fall of 2012.

The problem with the testimony of this report and that of his brother, is, How on earth can you prepare to resign for months in advance and still end up reading a Latin text with more than 40 errors in the Latin and at least 10 canonical errors in the formula of resignation?

We must return to the highly authoritative testimony of his brother: It was well thought out and no one forced him to do it.

The only conclusion possible is, then, that Pope Benedict XVI never intended to renounce according to the norm of Canon 332 §2 and leave the Vatican as Cardinal or Bishop Joseph Ratzinger. He fully and deliberately intended to remain the Pope.

For more on this, see the articles on How Benedict has defeated “Francis”, Benedict’s End Game is to defend the Church from Freemasonry, and The Imprisonment of Pope Benedict XVI.

CREDITS: The Featured Image is a screen shot from the Video embedded in this article, both of which are used in accord with fair use standards for editorial commentary.

One thought on “ABC in 2013: Benedict planned never to leave the Vatican”