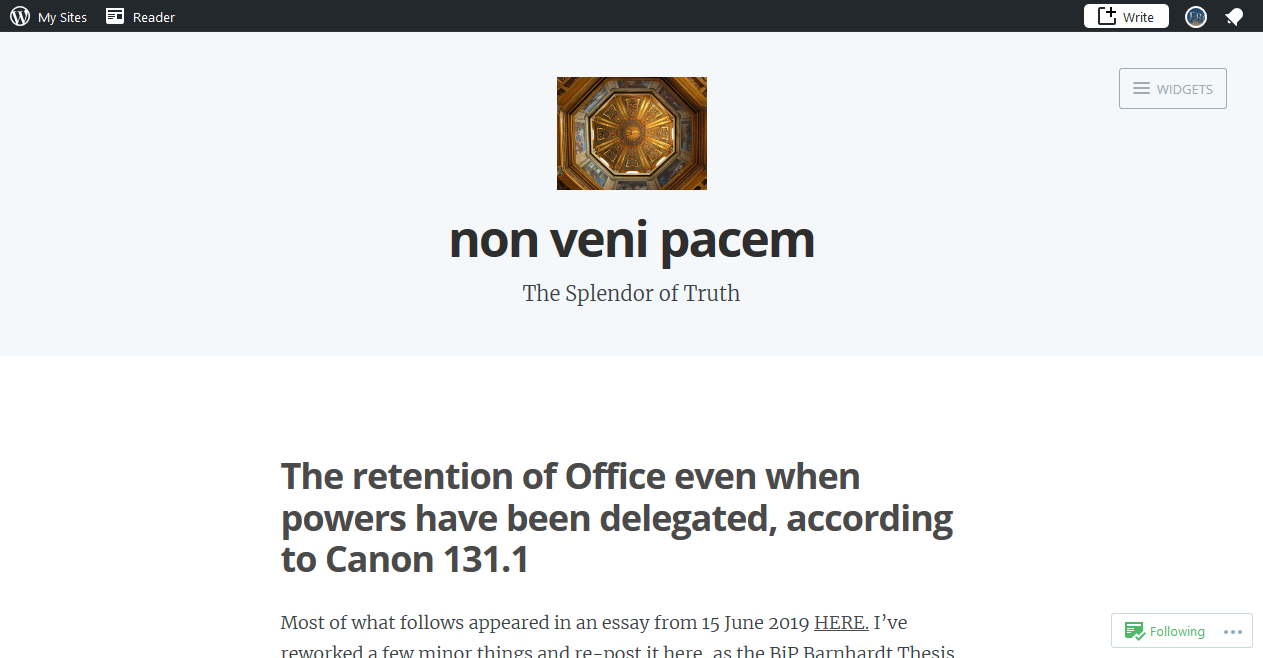 Ann Barnhardt is right when she says you do not need to be a canon law expert to read the Code of Canon Law: the very nature of what a Code of Law is intended to be, is to be a public instrument which all can access and understand. Understanding it, therefore, is not a gnostic art for the elite few initiates.

Over at Catholic Monitor, Fred Martinez calls me a Canon law expert. I do not hold a degree in Canon Law, so I dispute the attribution. But he does this, because I simply read the law and say what it says, how it says it. I do not have any vested interest in saying it means something else, because I am not a priest and I am not the member of a religious order in communion with Bergoglio. I am a hermit, and that means I have no superior but my Bishop, who is Pope Benedict XVI. I also did not sell my soul for $1,000,000 to stab anyone’s memory in the back who held that Pope Benedict XVI is the pope.

This is why in this controversy, it is those who have no vested interest who are the truth tellers. Mark Docherty is one of them. I have never met him personally, but I know he is a truth teller because he simple lays out exactly what the Code of Canon Law says.

He blogs at Non Veni Pacem.

In his latest post,  The Retention of Office even when all powers have been delegated, according to Canon 131.1, he shows that there are a number of Canons which all concur that the Renunciation is invalid. You often hear Ann Barnhardt talk about canon 188. She breached the defenses of the Big Lie about the Renunciation using that Canon (no pun intended, but it is a nice pun!).* And you will often hear me talk about canon 17. Canon 332 §2 is the key canon, of course.

I highly recommend reading Marks post. As one who has actually studied Canon Law at at a Pontifical University here at Rome, I can say that it merits a 10 out of 10, and you would not find its like in any Doctoral Thesis in the entire Eternal City, after Feb. 11, 2013, because they would boot you out of the program — because IT IS ABSOLUTELY TRUE.

POSTSCRIPT: I hope all my readers get on board with the February 28, 2020 Initiative. It’s not about me, its about saving the Church. I do not propose it so as to go forward. I see it as a way of handing the baton on to my betters, so that they do their part. So please try to get everyone to join in the effort.

FOOTNOTE:  If anyone of my readers is a talented graphic artist, I would suggest you do a graphic showing a walled city with Bergoglio on top, Benedict imprisoned, and Ann outside with a Big Canon, labeled 188, the wall of the city named the Big Lie: a Valid Renunciation. And defenders of the Big Lie, on the top of the wall with Bergoglio on his left and right, some with money bags in their hands. It would immortalize the current crisis for posterity, and be remembered until the end of time.

One thought on “A Host of Canons declares the Renunciation invalid”