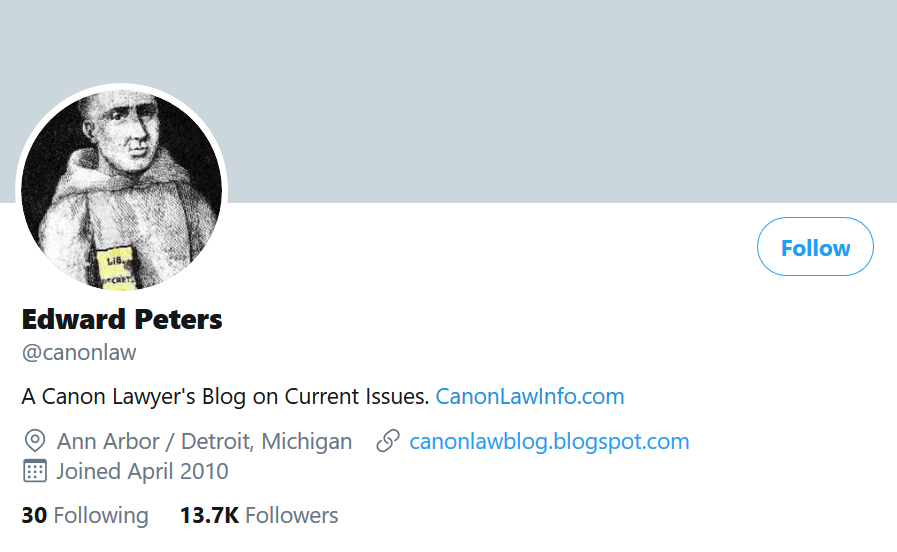 I do not know whether I should laugh or cry at this tweet by Canon Peters. But I will say something that may be surprising: Steve Skojec did the right thing by asking a canon lawyer to give his opinion. I praise Steve for that, as it is a lot better than insulting everyone on Social Media.

But as for Canon Edward Peters, I have to say he does not know his Canon Law.

I know that sounds like an incredible statement coming from me, who does not hold a degree in Canon Law, but I will demonstrate that it is a true statement.

First, for those who know nothing at all about the controversy over the Declaratio of Pope Benedict XVI. Please read my Index to Pope Benedict’s Renunciation. There are 8 canonical reason why the declaration did not separate Pope Benedict from the papal office, as I detailed in my letter to the Dean of the College of Cardinals, by way of courtesy, for those who need a short list. As can be seen from both links, the controversy has NOTHING WHATSOEVER to do with a claim that coercion was involved as a cause of invalidity. I understand that such an idea is common among many Catholics, but here we discuss canonical problems, not popular opinions. This is the first reason why I have to laugh, because, Canon Peters gets the very nature of the controversy wrong!

Here I had to burst out laughing.

But as anyone with the slightest knowledge of Canon Law, like myself, or with eminent amounts of it, like Mons. Arrieta, Secretary of the Pontifical Council for Legal Texts, knows, the Declaratio of Pope Benedict XVI is an administrative act not a juridical act.

It is an administrative act, because it is an act of a superior with a munus, in the exercise of his ministerium, deciding something within his whole power and by a motu proprio. It has nothing to do with hearing a case before a judge.

Even if Canon Peters was thinking of putting the Declaratio of Pope Benedict before a tribunal, he errs, because the act of the Roman Pontiff cannot be adjudicated by any power on earth, according to canon 1404: prima sedes a nemine iudicatur. — You know, that canon they are always quoting against Catholics in communion with Pope Benedict, to insist that his Declaration means what they say it means and not what Benedict said.

Then, you really have to cry, because Peters thinks that if a Pope for any reason whatsoever, calls another man, “pope”, that means he renounced papacy.  I guess Canon Peters has never been present when the Coptic Patriarch visited the Vatican. The Coptic Patriarch is called pope. I guess too, Canon Peters thinks that if the Pope catches a fever and while you are visiting him at his bedside, he calls you the Pope, then you become the pope!

Let us see what the Canon says, to see if there is any shred of reason why Canon Peters would be citing it to Steve Skojec. It is not a canon cited in controversies over the resignation, to my knowledge.

Here is the Latin:

Which in English, I render thus:

Canon 125 §1 – An act placed out of grave fear, unjustly brought to bear, or out of deceit, is valid, unless something else is provided for by the law; but it can be rescinded through the sentence of a judge, whether at the request of the injured party or of his successors in law or ex officio.

Canon Peters should know not to cite this canon, since both Canons 188 and 332 §2 expressly establish that coercion makes a Papal renunciation invalid. It is not as if anyone who has the slightest knowledge of the controversy can be ignorant of canons 188 and 332, especially if he be a canon lawyer with whom dozens of Catholics have shared on Twitter articles about this matter, as Canon Peters is. Thus his appeal to canon 125 §2 is understood with great difficulty to be something other than dishonest. I can only think he was tweeting after having had one too many beers for Mardi Gras.

Yes, ask Canon Lawyers. But perhaps give some of them some time to respond first and think about what they are going to say. I think this one tweet from Peters shows he either has bad will or lacks the expertise he should have acquired before answering such an important question. But I am confident that with a little study he can acquire it because even Catholics with no such training but good will, can understand it.

CREDITS: The Featured Image is a screen shot of the Twitter Profile Page of Canon Peters on Twitter, and is used here in accord with fair use standards for editorial commentary.