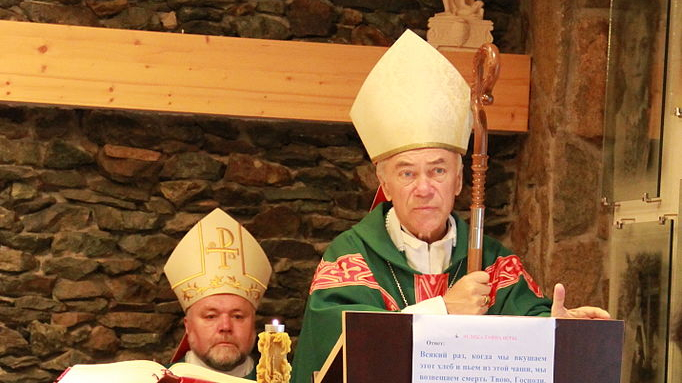 The sign of a man is that he fights back when his cause is just. The sign of a Catholic Bishop is that he not only calls a heretic, “a heretic”, but that he treats him as one, that is, as one who has no jurisdiction in the Church. This is the true and ancient faith: a heretic loses all jurisdiction in the Church ipso facto. This is also the teaching of Pope John Paul II in the Code of Canon Law of 1983, canon 1364.

Accused of saying things which are improper and publicly denounced by the local Bishop — who is a former Intelligence officer of the Polish Communist State — Archbishop Lenga has gone on the warpath!

Here are some of the quotes, in English translation, attributed to him in the NCR article, entitled, Retired Archbishop says he wont keep quite about pope as ‘heretic’, on his response to the demand of the Polish Bishops’ Conference that he be silent:

Christ gave me authority through the Church to proclaim the truth, and I’ll do so as long as I live.

I won’t yield to (canonical) degradation by those whose own statements and actions are entangled with heresy and sectarianism.

What right do they have to recall what pertains to the Church when they themselves have never upheld it?

The context of these comments appears to be this, that Archbishop Lenga has called Bergoglio and those advancing his agenda of Apostasy what they truly are, heretics. The NCR reporter, Jonathan Luxmoore writes of Archbishop Lenga:

He added that he had no wish “to belong to a church run by Protestants, Islamists and Jews,” and believed his critics should “form their own church, rather than usurping power in the Catholic Church.”

In a book-length interview, circulating in Polish on YouTube, he said he still recognized Pope Benedict XVI as pope and had dropped the “usurper and heretic” Francis from his prayer intentions after concluding he was spreading “untruths and sins” and “leading the world astray.”

In a Jan. 20 Polish TV interview, he said “many bishops and cardinals” lacked a “deep faith” and had adopted “an attitude of betrayal and destruction” by seeking to “correct Christ’s teaching,” adding that current confusion in the church indicated “the Antichrist is here.”

Archbishop Lenga is acting perfectly as a Catholic Bishop should. Let us pray to God and Our Lady, that more bishops join him and Bishop Gracida in denouncing the heretics and usurpers in the Church!

CREDITS:  The Featured Image is a photo of Archbishop Lenga from June of 2013, taken and used with permission of its author according to the terms stated here. The quotes in English attributed to Archbishop Lenga can be found in the Article cited above, and are used here in accord with fair use standards for editorial commentary. — In the quotes attributed to the Archbishop, FromRome.Info has added the honorific capital to the term church, referring to the Catholic Church, since the practice of writing, church, instead of, Church, is a masonic practice of international journalism, which FromRome.Info entirely rejects in principle.

17 thoughts on “Archbishop Lenga fires back!”