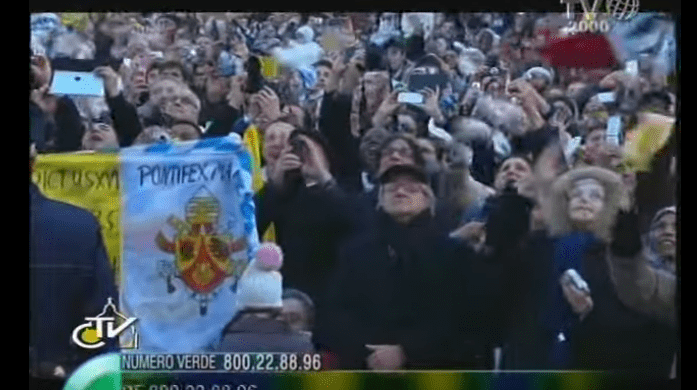 This is proven by the fact of the huge crowds of cheering Catholics at Castel Gandolfo which gathered to hear the Pope renounce, carrying signs which hailed him AS POPE Benedict!

And the video shows a fervor and love which Bergoglio as NEVER received.

Before 8 p.m., Pope Benedict XVI comes out to speak with the crowds. The journalist narrating calls him, the Pope. He is dressed as the Pope. He is even wearing the dreaded Papal Ring that Bergoglians insist no longer wears and has.

And oops! He even says, I am still the Supreme Pontiff!

In fact he does not renounce anything!

No wonder the link from the Vatican Website, in the official page of the text of the short speech by the Pope, to the video no longer works.

And the journalist even says that we might see Pope Benedict as Emeritus speak to the Crowds like this again! Oops!

He is speaking as the Pope! as the journalist says this. Oops!

And after 7 years, Pope Benedict still has not found a black cassock in all of Rome. Imagine that!

CREDITS: The Featured Image is a screen shot from the video embedded in this article, showing the exultation of the Catholic Faithful for the true Pope.

9 thoughts on “The “renunciation” which never happened”