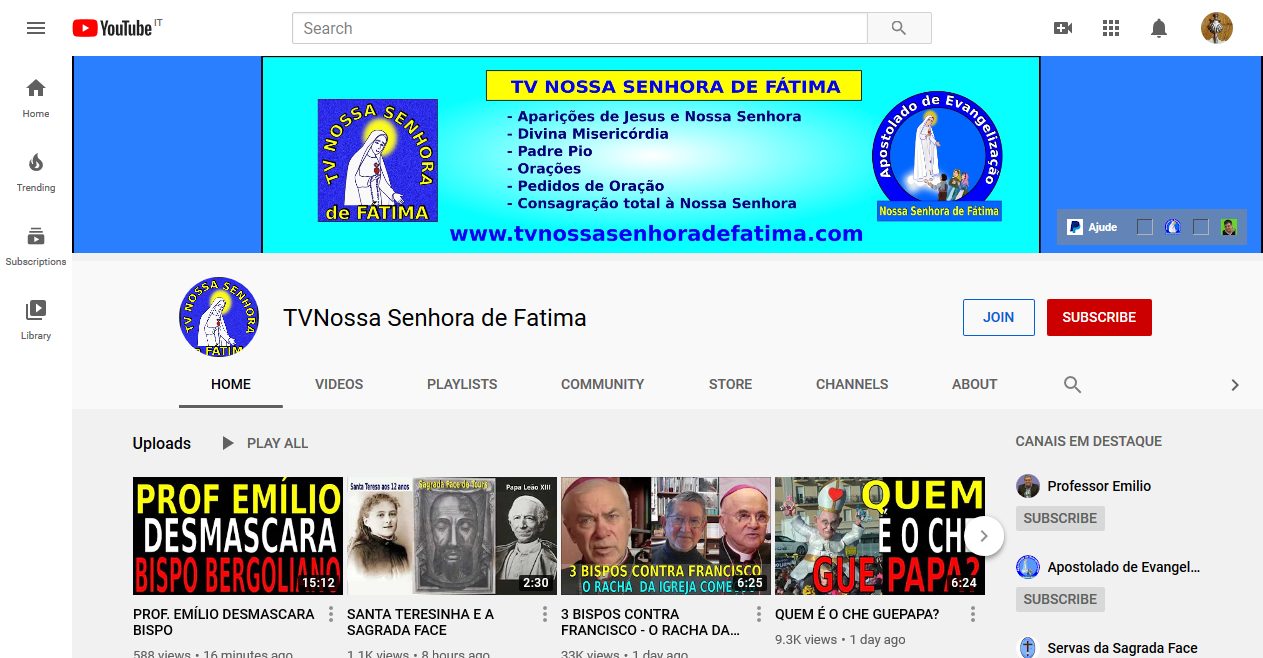 Our mission is to announce the Good News, to denounce the false church of Bergoglio and to defend the truth about Pope Benedict XVI – the real Pope cloistered in the Vatican.

Thus, TV Nossa Senhora de Fátima brings videos about these themes every day. We allow people to download the videos – and the result is that in addition to the audience on youtube we have a lot of audience on other social networks – where the internet users themselves share the videos.

TV Nossa Senhora de Fátima is headquartered in Brazil and our videos are in Portuguese. It is possible to use youtube subtitles for other languages.

Our Web TV is committed to the truth. That is why exhaustive research is done before each video is recorded.

Our Web TV also has an eschatological vocation, preparing Catholics for the Lord’s return – with extreme care with the sources of revisions and prophecies used.

In Brazil, Catholics are kept in ignorance of the Vatican’s events and scandals. The news just doesn’t get here.

Thus we have brought the news to Catholics – and more and more Catholics understand now that Benedict XVI is the true Pope and that Bergoglio is not.

The Liberation Theology gang – which prevails in Brazil – has defamed us in parishes, masses and even videos on youtube (through infiltrated left youtubers and priests who pose as traditional but declare that Bergolgio is pope …)

Vatican News recently showed an interview with a singing priest here and with a Cardinal – criticizing our work.

We take it as a compliment – a sign that the denunciations are having an effect.

Another victory was in 2019 that we managed to prevent the publication of the new missal – which will come with changes and by the way will include Mother Earth and other liturgical abuses.

Through our denunciation, Catholics mobilized against the new Missal. Then the Confederation of Bishops was forced to postpone the new version – which they said was already ready.

We are the country’s first voice to expose Bergoglio as he is and to defend Pope Benedict XVI. Gradually this work is bearing fruit because other voices are still shy, but in the same direction.

We ask for prayers for our mission and for our security – as we have already received threats because of our work – which is actually a mission inspired by the Lord.

Our videos can be accessed at www.tvnossasenhoradefatima.com.br