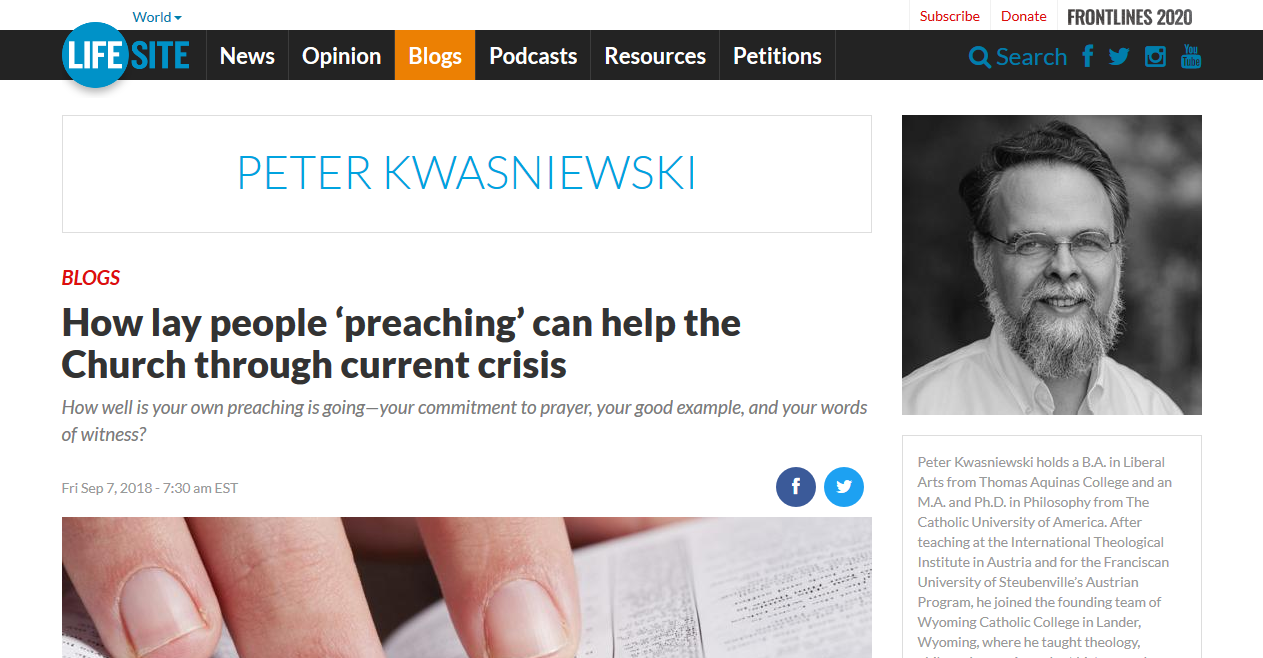 Vatican II unleashed a host of errors. One of them was laicism.

I am not speaking of the European political concept of laicism, which refers to the concept of a state which is not Catholic or religious in its affiliation, but which is secularist. No, I am speaking about the kind which regards the disordered relationship of the laity to the clergy.

Laicism is the idea that the laity should run the Church or can hold offices in the Church, or worse, that they can be as effective or more effective than clergy in the work of the Gospel.

Laicism as an error is completely foreign to Catholicism. It comes from the protestant sects who rejected the priesthood of Christ as something which men could share by the Sacrament of Orders.

Laicism is also common in Catholic Media, because social media is a do it by yourself sort of thing, and that allows laymen to begin to assume teaching and preaching roles which do not belong to them.

Obviously, no where in the Gospel is there the least shred of support for the idea that the laity have any role of responsibility in the preaching or teaching of the Church. Yes, they are to give personal witness, but no, they should not take initiatives on their own.

However, the general corruption of the clergy since Vatican II has made the Catholic way of doing things very difficult if not impossible. Seminaries have become institutions to teach vocations not to believe, to accept modernism and to go along with sexual perversion, so long as it is kept generally hidden from the laity.

For that reason 99% of laity today probably do not have a pastor who wants to convert anyone to the Catholic faith AND knows how to do it AND has the time to organize any effort. He is straddled with keeping the parish running with all the demands for the Sacraments upon fewer and fewer clergy.

But this is the malicious feedback of laicism. Because laicism destroys vocations.

Laicism teaches that a young man can start his own apostolate and get a job maybe in the parish. No need for personal commitment of celibacy or the evangelical vows of religion!

Laicism is also exacerbated by the abolition of minor orders.

The Catholic way of things has in practice been abandoned by the clergy who followed Vatican II instead of Catholic tradition. The way back to catholic practice in the apostolate REQUIRES the restoration of the minor orders, not as mere sacramentals of prestige, but as true apostolates and missions.

A local Church which is properly functioning will then have no lone priest serving in the Parish, he will have several dozen men in minor orders — thus no longer laymen — to help him in everything and everywhere he goes.

Until that kind of way of being Church returns, Catholics who wish to defend the Faith or promote a work of mercy need to be very careful not to arrogate to themselves any authority. They need to be humble and not promote their own views contrary to that of any Doctor or Father of the Church. They have to have the common sense not to support members of the Lavender Mafia, or those in denial about Bergoglio.

The natural inclination of good laymen will always be to always defer to the priest. That is a good inclination, but in times of heresy, apostasy or moral depravity, one must be cautious and prudent. Because true obedience is for the upbuilding of the Church, not collaboration in destroying it.

In the mean time, Catholics should listen only to laymen or laywomen who are citing Church documents and Canon Law and showing due respect for the teaching of the Saints, the Doctors and the Fathers of the Church. Those who play games in such matters, should be shunned.

The error of laicism needs to be stamped out. Authentic catholic apostolates will oppose this error and speak against it. Where this error is not opposed, the result will be the death of the local church.

One of the great effects of laicism is in thinking that Pope Benedict XVI is no longer the pope, because he renounced the same thing which a layman renounces when he gives up heading an apostolate at his local parish. Laicism makes Catholics forget that Jesus gave real spiritual powers of governance and mission in the Church called munera which only the clergy can hold and exercise. The singular of munera is munus, not ministry.

CREDITS: The Featured Image above is a screen shot of an article by Dr. Kwasniewski at LifeSite News, a media outlet run by laymen. The article encourages laity to preach, and attempts to craft an argument from magisterial documents which say no such thing. This same media outlet recent called a meeting in Munich Germany a lay event, while showing a picture of Archbishop Vigano on the main article. Laicism in action!

4 thoughts on “The error of Laicism”