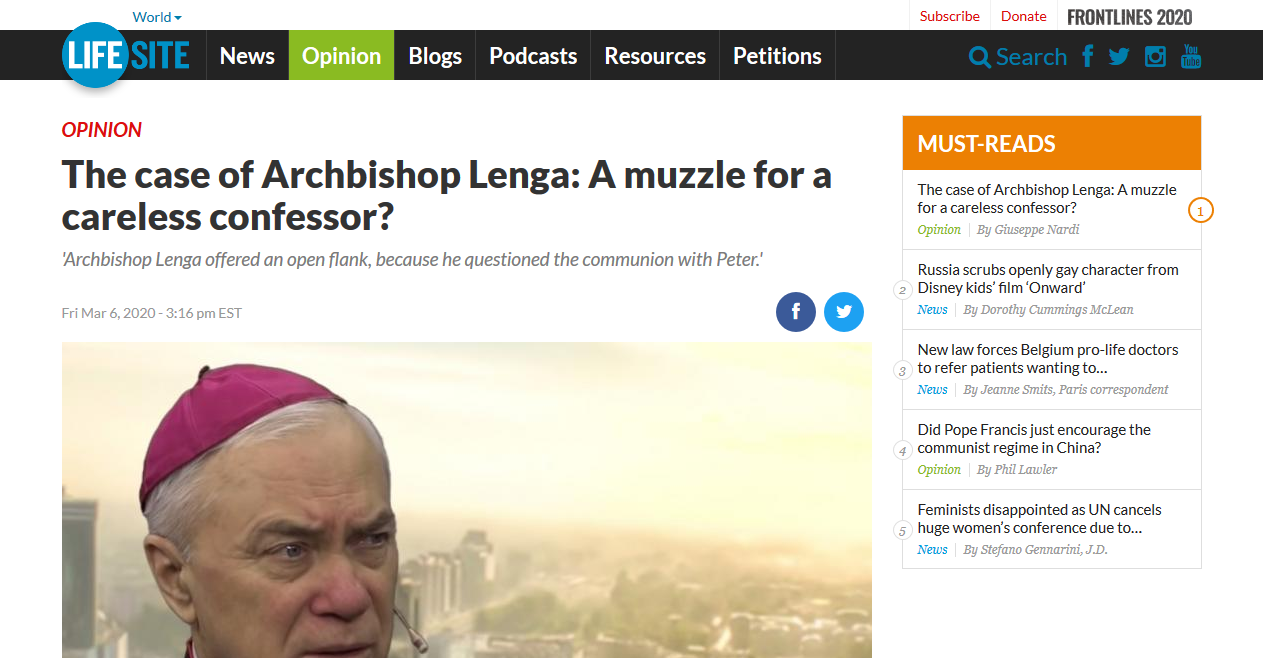 The error of Laicism is a particular nasty error. It leads laymen to think they know better than even members of the Sacred Hierarchy who are faithful to the Church. The error of secular politiking is even worse, it seeks to put down any Catholic who stands for all the principles of the Faith without compromise, just as Our Lady asked at Akita.

It is therefore very sad and shameful that LifeSite News should publish, yesterday, an article entitled, The Case of Archbishop Lenga: a Muzzle for a careless confessor?

FromRome.Info has covered the heroic witness and faith of Archbishop Lenga in several previous articles:

What is shameful about Lifesite’s article (which is merely an English translation of a German article published at Katholiches) is that it calls the Archbishop careless and imprudent for speaking the truth!  That is the critique of a politician, not of a Catholic! The insult is reserved for the end of the article, where it says:

Thus Archbishop Lenga was quoted from the Polish interview by the progressive British weekly newspaper The Tablet on Monday, February 24.

With such words, Archbishop Lenga offered an open flank, because he questioned the communion with Peter. The flank was immediately attacked, although the Polish bishops themselves, through their resistance to Amoris Laetitia, do not have an unclouded relationship with the current incumbent in Rome. They are careful, however, not to voice direct criticism of Pope Francis. Archbishop Lenga, also a Pole, who also lives in Poland, therefore became a “persona non grata” himself, as he criticized it in his 2015 statement.

LifeSite News it must be remembered is funded by a Canadian Political Action Committee and is co-founded by a self declared atheist, who rejected the Faith because of its restrictions on morality when he was a young man, but who after converted back to the Faith. I personally would have questions of the extent of that conversion after such a shameless attack on the Archbishop.

To say that he questioned communion with Peter is not only false but a theological error. He has clearly stated that he is in communion with Pope Benedict. And unless you are insane, it would be a blasphemy to call Bergoglio “Peter”. Certainly, Lifesite News which criticizes Bergoglio on a daily basis, nearly, would also be questioning Peter, by that standard, no? But I guess Lifesite Editors think that laymen can do what Archbishops cannot.

7 thoughts on “Lifesite News takes a swipe at Archbishop Lenga”