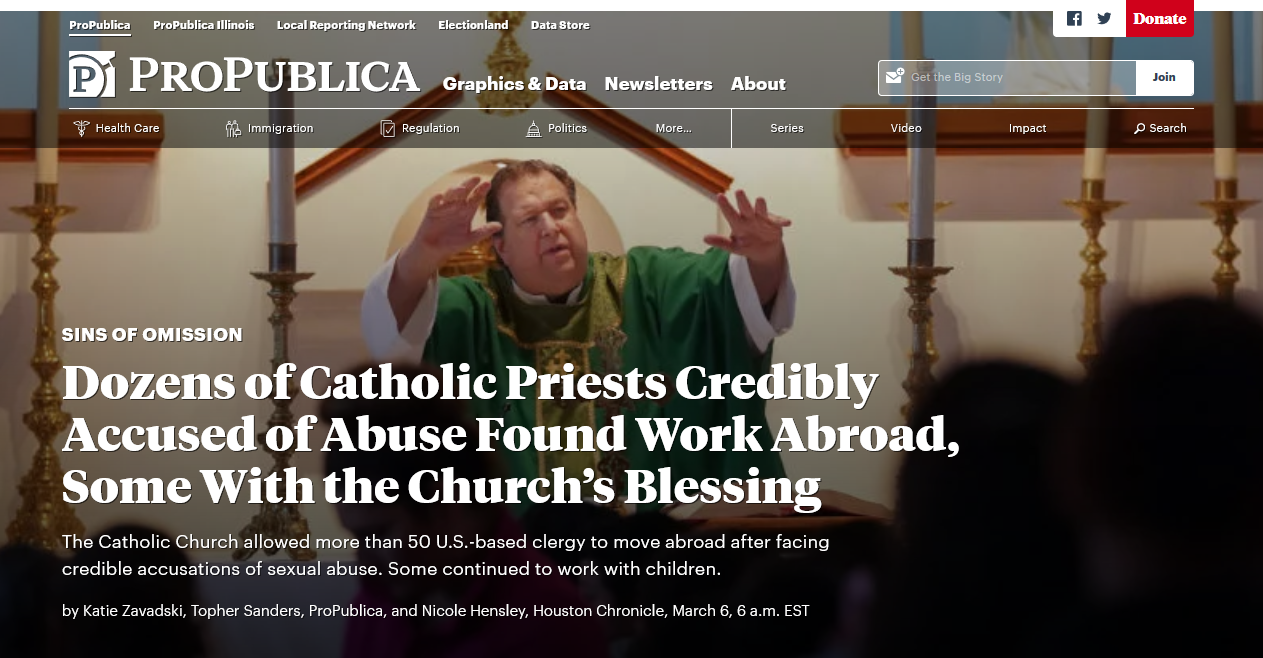 Here at FromRome.Info I do not cover the pedophile crisis in particular, because its better covered elsewhere and because I want FromRome.Info to be a place where you do not have to look into sewers. That is not because I do not think it is a major problem, nay, I think pedophile priests should receive capital punishment for their crimes.

But to all this consternation and shock among the Catholic Faithful that Bishop after Bishop, Diocese after Diocese is denying communion on the tongue or shutting Churches and ending public celebrations of the sacraments, I ask you to remember what is going on on the Church.

Refusing the Sacraments during an epidemic is nothing compared to pedophilia. If you want to see how endemic the moral collapse of the entire hierarchy is, just read this article by ProPublica entitled, Dozens of Catholic Priests Credibly Accused of Abuse Found Working Abroad, Some with the Church’s Blessing.

The article has one error, that I can see: its not with the Church’s Blessing, its with the blessing of the Lavender Mafia.

Consider what kind of perverse mentality is involved in allowing these monsters to go overseas and continue to rape children:

No man arrives by chance at such an abyss of conscience. It has to be learned and taught. And if Bishops are practicing it everywhere, then the clergy is endemically corrupt. That is why they do not bat an eyelash at denying the Sacraments or the baths at Lourdes, they do not even believe in such things!

So do not let them make you think that YOU can give them the Corona Virus. Remember it is they who can give you AIDS!

This is why I strongly have advised the faithful for more than 20 years to NOT go to Mass with someone who is obviously a heretic, modernist or a member of the Lavender clique. Its not only a matter of your soul’s salvation, its also a matter of public health safety.

Where did all these monsters and their enablers come from? The answer is easy: any Bishop who would go along with Vatican II has the precise absence of moral conscience which is required to tolerate such men in the priesthood. This is because Vatican II implicitly affirms that the Catholic Faith is a game and that adapting that game to the times is perfectly licit and withing their power.

CREDITS: The Featured Image is a screen shot of the ProPublica article cited above, and is used here in accord with fair use standards for editorial commentary and as a free advertisement of their article.

PLEASE NOTE: In this article I compare the denial of sacraments to the collaboration in allowing pedophiles to continue to operate near children. These are two different sins and of two different orders of morality. However, as they both partake of the sin of treachery in the execution of the Divine Ministry, the second is worse, because it breaks a promise made after the fact of a crime proven. But the first, obviously, is worse because it is directed to more souls and involved the Most Blessed Sacrament, God Himself. So by this comparison, which I make, I do not intend to ignore this fact, but only speak under a limited respect of treachery as a break of a promise made.