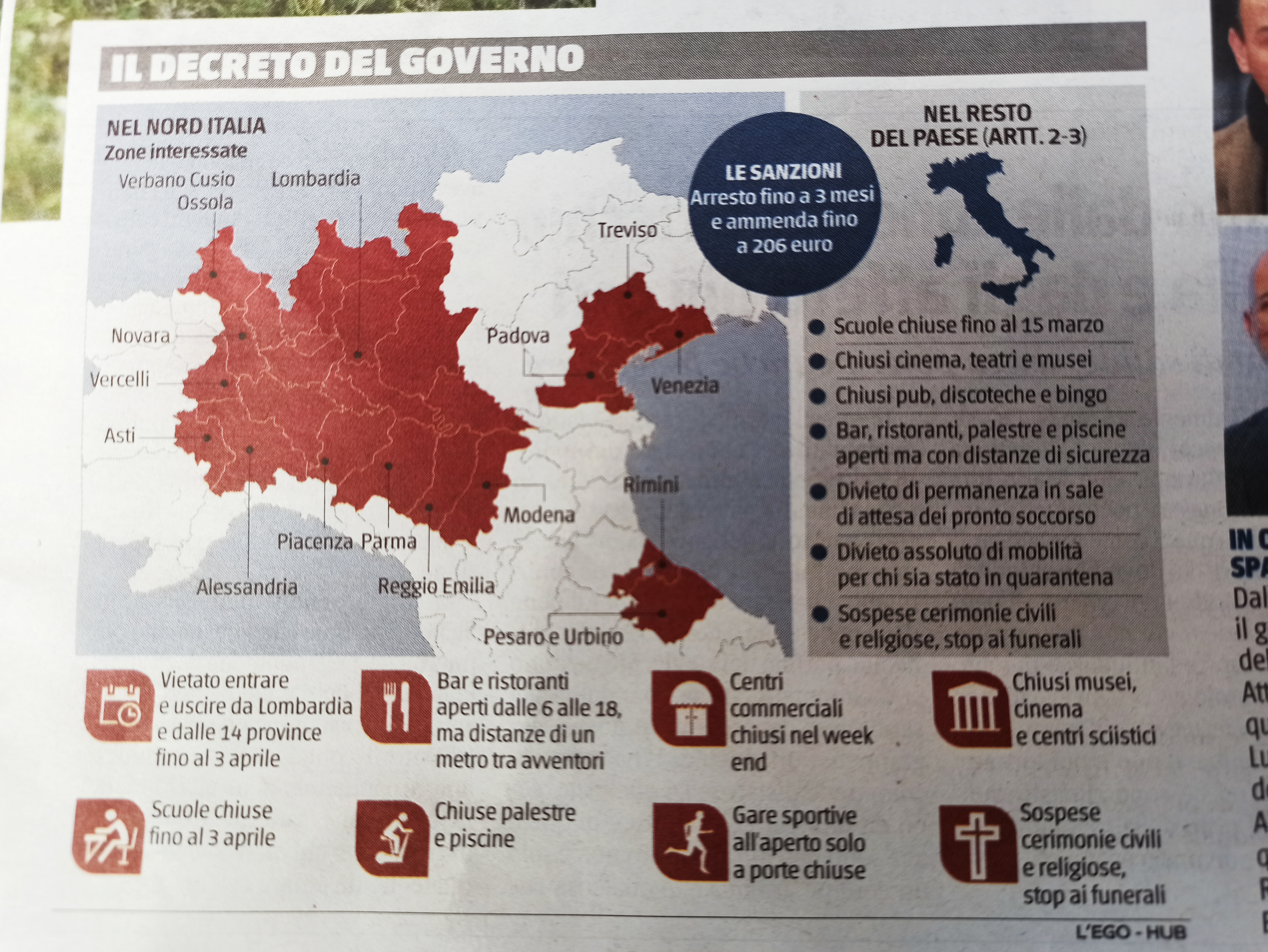 Monday, March 9, 2020: Sometimes there is a mystical or spiritual way of looking at reality which makes it comprehensible. And sometimes, if there is such, it is hard to understand.

The recent illegitimate and uncanonical decision of the Italian Episcopal Conference to mandate the suspension of all public religious services in Italy in all Catholic Churches, Monasteries, Convents, Sanctuaries, Basilicas, in Italian Territory is just one case.

They Government has not decreed such a thing. While the Government Decree concerns both the regions above (See Graphic above), and all of Italy, according to the Lateran Pact no law of the Italian State applies to the Church on the question of religious services. The new Decree does not therefore mention the Church. Legal Scholars in Italy are sounding out, even on national TV, and confirming this.

As one can clearly see, only a small part of the country is affected.  — To get an idea of scale, all of Italy is the same size as the State of Colorado. The regions placed under tight control by the Government Decree, are thus, no much larger than the suburbs of Denver.

The result of the Bishops’ Conference decision, however, is that the great sin of naming the Anti-Pope in the Canon of the Mass, in the very presence of God Almighty in the Most Blessed Sacrament — In Italy, the Italian Canon names the Pope after the Consecration — has definitively ended in public.

Now the people of God in Italy, at least, will not be responsible for that sin any longer.

So from a spiritual point of view, the panic among Bergoglians is shutting the Bergoglian Church down.

Also, since all masses are now private, those priests who in conscience know they should not name Bergoglio or should name Benedict are now free to do so. The make believe of the Bergoglian Pontificate has been unwittingly struck a major blow.

CREDITS: The Featured Image of the graphic was taken from a photo of today’s edition of Il Giornale, p. 7. If you live in Italy, you want to get a copy of this paper today, which has the best reporting on the Government Decree and how absurdly it was promulgated and hashed up. The image is used here in accord with fair use standards for editorial commentary and as a free advertisement of today’s edition of Il Giornale.

6 thoughts on “In Italy, no more public Masses which name the Antipope in the Canon”