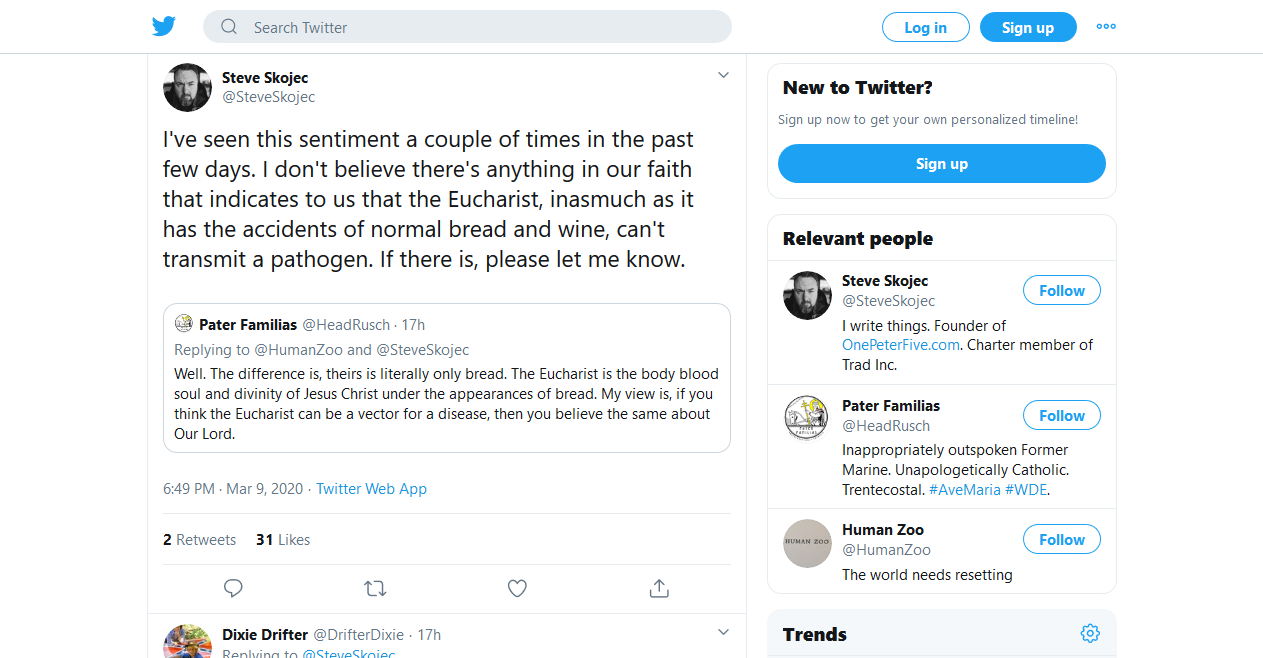 There comes a point in every profession that one must speak about the criteria for professional incompetence.  I will just leave it at that.

Another reason that laymen are not the best suited to explain the Faith on social media. 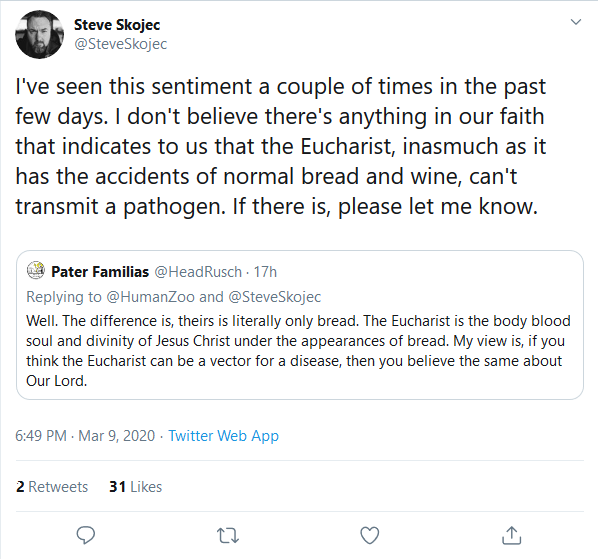 But for those who do not know their faith, the One who is the Most Blessed Sacrament is the Lord and Creator of All, the giver of life and the source of all Healing. He is also the Judge of all.

If you are in the state of grace, then have no fear whatsoever of receiving the Sacrament, even in the time of plague. Because your faith will merit your salvation, and we are not made for this world, but for life in the world to come.

This is simplicity of heart. If you think God the Father gives diseases to those who receive His Son, you are simply an atheist and blasphemer. And if you think He will not reward those who trust in His Son, then you are an infidel.

Likewise, if you are looking to escape every cross, then you have not yet showed supernatural faith in Christ’s crucified! Better to place ourselves in the hands of God than in the hands of doctors and scientists, who have never saved anyone from physical death, let alone eternal damnation.

Here we need to make distinctions. There is no Saint in the Church who fled from a plague. There are many Saints who helped the sick and risked death, some of whom died of the plague, others whom did not. The Saints did not flee, because by faith they knew that we are to live for God. Period. Whatever befalls us, God is in control.

Saint Bernardine of Sienna assisted his fellow townsmen in the plague. He was lambasted by relatives for it. And some of them died of the plague. But he did not. He went on to be one of the greats saints of Italy who called the Italian people back to the Faith in the 15th century.

Even though there is not the obligation to give the sacraments which do not pertain to eternal salvation during the time of a plague — Saint Alphonsus teaches this in his Theologia Moralis — a priest will be damned if he refuses the Sacrament of Penance to sinners during a plague. Likewise, the Sacrament of Baptism. This is because it is a grave duty of the priestly dignity to save souls. And to refuse the positive means of salvation to any soul, so as to save one’s own life from a possible risk, is a mortal sin against both charity and the priestly duty.

But, medically we know there is minimal risk of death from the Corona Virus. The mortality rate of those who end up in hospitals, who are only a tiny fraction of the entire population — most of whom when they contract Corona virus have no or few symptoms — is only 3.4%. So for the entire population it is less than perhaps a half of a percent. And these are all individuals with bad states of health, except for a very few. So Corona virus presents no real threat to anyone with normal health, more than the normal influenza which kills more people each month in the world, ever year, than the Corona Virus has ever killed ever. This observation is confirmed by a Vanderbilt Doctor.

For that reason, those who act disproportionally are not acting rationally. Most of all when they discount God Himself present in the Eucharist! This is simply atheism. And shows that some persons have very little faith or sense. Remember, God created viruses. They serve His will to punish sin and sinners and give the just means of meriting eternal life. This does not mean that we should be deliberately careless, but it does mean that we should take God as our surety and trust in Him. He is the First Cause and our last End. Nothing can happen to us unless He wills it. Confess your sins and live ever as His trusting servants and friend. And certainly do not let hypochondria lead you to omit the Sacraments, if you are in the state of grace.