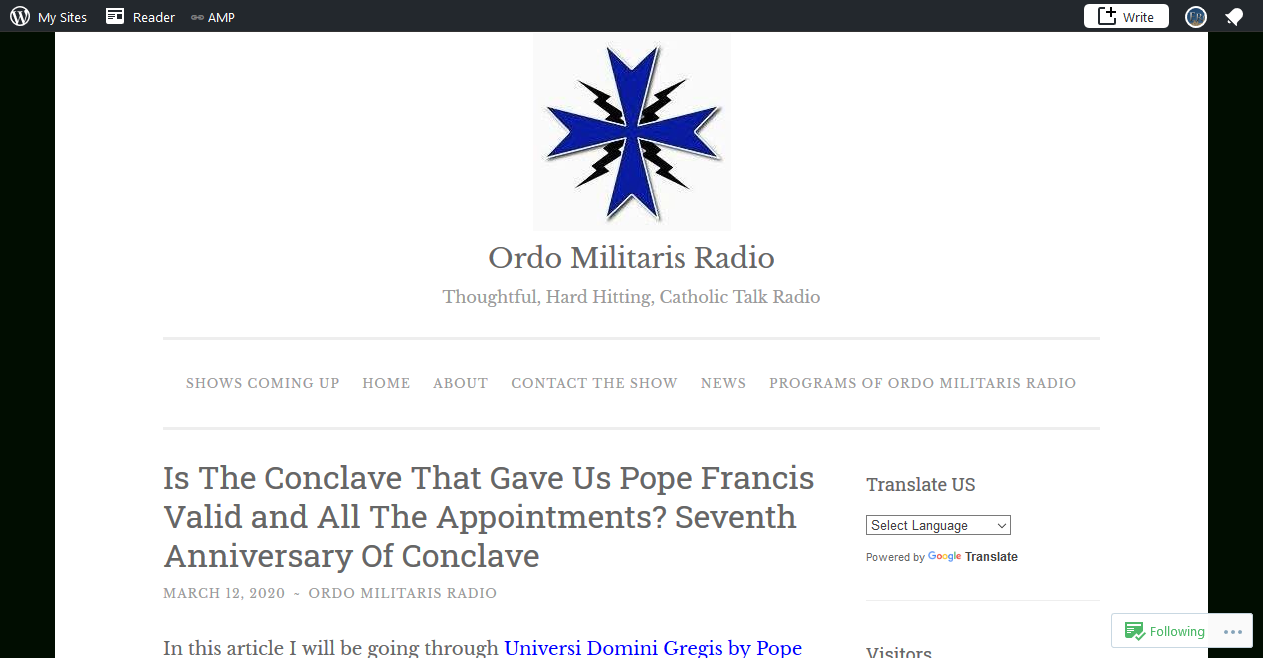 In this article I will be going through Universi Domini Gregis by Pope John Paul II to see if the laws of the Conclave that gave the world Francis, were broken and if he was not validly elected.

It is seven years since we had the conclave that gave us Pope Francis, with all this craziness and madness that has happened ever since, and then the worship of Pagan Idols in the Vatican Garden and Basilicas, all our worries and concerns seem to not matter and when we want to investigate or do these reports, certain groups of Catholics say it is not necessary and just obey and not worry what is going on.  But I am with many who think there needs to be an investigation and here we will look at what news reports said those fateful days after the conclave and all the breaking news.

“Nov. 22, 2014:  John Bingham, reporter for the Telegraph, writes his report, Pope Francis: how cardinals’ Conclave lobbying campaign paved way for Argentine pontiff, which appears on the online edition at 8:15 PM London time.  It is in this report that the allegations of Dr. Ivereigh, regarding vote canvassing are first made news.  All the subsequent reports will react to this. (On Nov. 26, this article was published, with later information, in a Spanish translation by Secretum Meum Mihi Blog, here.)”

“Nov. 23, 2014: A report by John Bingham, entitled, “English Cardinal ‘lobbied for Pope’“, is published on p. 16 in the Sunday Telegraph, UK, regarding Dr. Ivereigh’s book and the allegations concerning the vote canvassing by Cardinals in days preceding the Conclave of 2013 (according to Maggie Doherty’s Letter to the Editor in the Daily Telegraph, Nov. 25). An image of page 16 of the Sunday Telegraph is subsequently published by a Spanish blog on Dec. 1 (here)”

“Nov. 25, 2014:  In a Letter to the Editor of the Daily Telegraph, Maggie Doherty, the spokeswoman for Cardinal Murphy-O’Connor denies that Cardinal Bergoglio was approached by Cardinals or consented to the work of “Team Bergoglio”. (See here for an image of that letter).

“Nov. 25, 2014:  The From Rome blog reports the events known and speculated about the canonical implications of UDG 81, in “If Ivereigh is to be believed, was Bergoglio’s election invalid?“

“Nov. 26, 2014:  The From Rome blog adds an addendum concerning the implications of canon 171 to its previous report.

Nov. 27, 2014:  Returns to the topic of “Team Bergoglio” in, Ivereigh + UDG 81 = A Radical Problem for the Pope, which discusses both the letter by Maggie Doherty and the canonical reasons why it appears that the election of Cardinal Bergoglio may now be open to a challenge. This article was republished in a rather good Italian translation by Chiesa e post Concilio, on Dec. 2.”

These and all the reports gathered show how the news about the invalid conclave was being reported around the world, but there is something even more, a book by Cardinal Danneels which admits exactly what is going on, but was not given permission to publish it in Italian by the Vatican. Lifesitenews reported on this on September 25th 2015, and this quote explains what is going on currently:

6 thoughts on “Is The Conclave That Gave Us Pope Francis Valid and All The Appointments?”