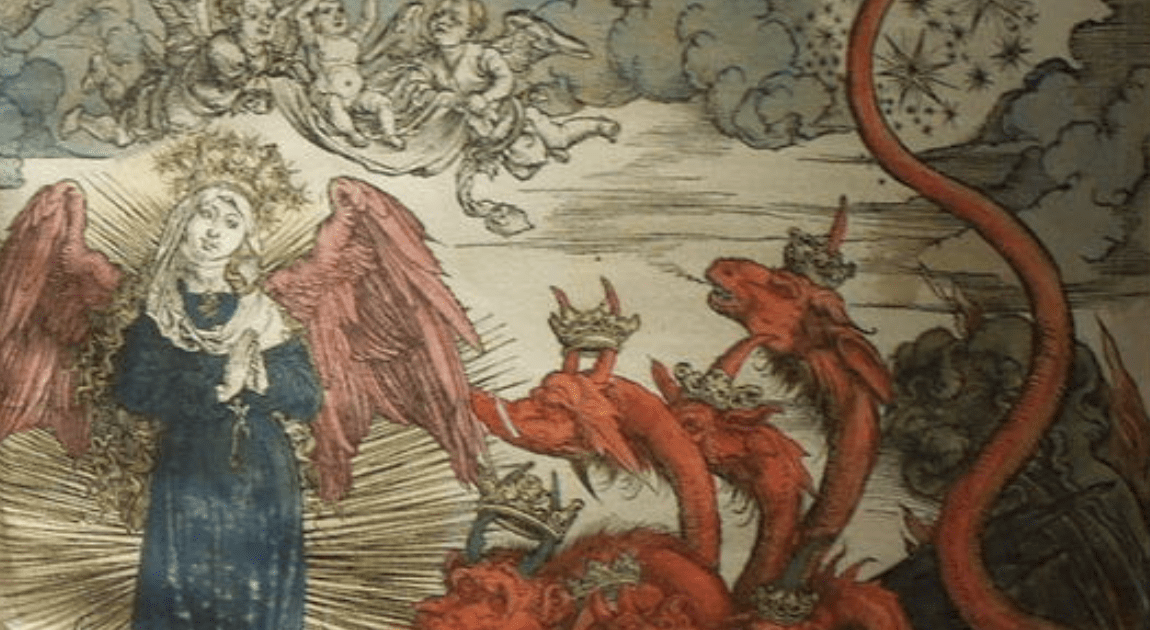 We are seeing the fulfillment of what the Apostle Saint John wrote about in the Book of the Apocalypse in chapter 12.  Let me quote from the Douay Rheims English translation of the Clementine Vulgate:

The Woman and the Dragon

1 And a great sign appeared in heaven: A woman clothed with the sun, and the moon under her feet, and on her head a crown of twelve stars. 2 And being with child, she cried travailing in birth: and was in pain to be delivered.

3 And there was seen another sign in heaven. And behold a great red dragon, having seven heads and ten horns and on his heads seven diadems. 4 And his tail drew the third part of the stars of heaven and cast them to the earth. And the dragon stood before the woman who was ready to be delivered: that, when she should be delivered, he might devour her son.

5 And she brought forth a man child, who was to rule all nations with an iron rod. And her son was taken up to God and to his throne. 6 And the woman fled into the wilderness, where she had a place prepared by God, that there they should feed her, a thousand two hundred sixty days.

Now I will give an exegesis based on what seems to be its fulfillment in our times. While Sacred Scripture has many levels of meaning, the text of the Apocalypse has ever been held by the Church to be prophetic in the sense of foretelling future events.

Historic Events that correspond to Apocalypse 12

And a great sign appeared in heaven: A woman clothed with the sun, and the moon under her feet, and on her head a crown of twelve stars (Apoc. 12:1)

On September 23, 2017, the Feast of Our Lady of Mercy, there appeared in the sky a very rare conjunction of the Sun, Moon, Stars and planets which had not occurred for 7,000 years. The Remnant published an extensive report on this, in advance, on Oct. 29, 2015, in an article entitle, Apocalypse Now? Another Great Sign Rises in the Heavens. Many scoffed at the article at the time, but I did not. Because being an aficionado of Astronomy since my youth and someone trained in Cultural Anthropology and Catholic Theology, I am well aware of the faith of the Saints that God reveals the majestic decisions of His Divine Will, at times, in the majestic space of the heavens.

The conjunction of these heavenly bodies to form the image of the Woman, standing upon the Moon, and with a Crown of Twelve Celestial Stars, was an unmistakable fulfillment of the vision of the Apostle, of which he could possible have had no knowledge except by revelation of the Holy Spirit in ecstatic mystical vision, as he records in his Book of Revelations.

This was the first and outstanding sign, given us by God, to indicate the beginning of the end times.

And there was seen another sign in heaven. And behold a great red dragon, having seven heads and ten horns and on his heads seven diadems. (Apoc. 12:3)

On October 4, 2019, 10 Bishops, including Jorge Mario Bergoglio participated in the worship of Pachamama in the Vatican Gardens, in which they consecrated at tree to the demon goddess and planted it to desecrate the very place where the ashes of Saint Peter the Apostle and his companion martyrs are buried! (See the photo of the 10 Bishops, here). While it is true that in Inca pagan theology, Pachamama is represented as a woman, and associated with the earth, unlike Pachauku who is the god of the dead and represented by a snake, yet the pagans of the Andes today associated Pachamama with a goddess of the earth or underworld, responsible for earthquakes and such things. Others associate Freemasonry or Marxism with the red dragon of history, and thus, the testimony that Bergoglio is a Freemason, while being an evident Marxist, also seem to indicate that this prophecy about the appearance of the red dragon with 10 horns is now fulfilled. In Scripture a horn is a symbol of a person holding power. The seven heads is a symbol of the perfection of astuteness in the working of evil. Or they can represent the 7 powers which seek the destruction of the Church: Clericalism, Gobalism, Marxism, Freemasonry, Modernism, the Lavender Mafia, and the St Gallen Mafia.

And his tail drew the third part of the stars of heaven and cast them to the earth. (Apoc. 12:4)

On March 8, 2020 Bergoglio ordered the Bishops of Italy to close their Churches, denying the Sacraments to 65 million Catholics. He subsequently ordered all the Bishops of the world to do the same. Many are obeying him, on their own initiative or by coercion by their fellow bishops. Priests every where are obeying this order.

But since the Church is the Heaven of this world, and since priests and bishops are the stars in that Heaven, to stop doing that which Our Lord commanded them to do: feed My lambs, feed My sheep, is the most diabolic thing the clergy can do. And as Saint Bonaventure says, the sin of the Angels who fell from Heaven at the beginning of time, is called a fall, because the Angels were created to serve, and not to serve is the essence of their sin: thus, like stars driven from their proper orbits in heaven, they are said to be cast down. Fallen priests are also said to be cast down to the earth, because they give up heavenly service for carnal and earthly service. Thus, I consider that the closing of the Churches to be the fulfillment of the Dragon’s Tail casting a third of the stars from Heaven. Indeed, just as a crocodile quickly and without warning attacks with his tail and smacks his prey into his grasp, so Bergoglio and his evil crew have acted with stunning alacrity to suspend the Sacraments in the entire Church, dragging the clergy — who were foolish enough to be deceived by the fake announcements of Benedict resignation and stubborn enough to refuse to examine the facts of law and history which proved the resignation never happened — into his evil work and consummating both their apostasy from God and their own eternal perdition, because by denying the Sacraments to the Faithful they deprive them of the grace of salvation and murder the Mystical Body of Christ.

And she brought forth a man child, who was to rule all nations with an iron rod. And her son was taken up to God and to his throne. (Apoc. 12:5)

Historically this refers to the Lord Jesus Christ, without a doubt. But when the passage of Saint John is read in reference to our day, I believe it must be interpreted in 2 ways. First, as the rebirth of the Church of Jesus Christ, which will separate itself from the false Church, and second of the coming of great saints who will restore the Church and Christendom, working both in the Church and in the State. For their works, they shall be glorified by God in Heaven, since their names were written in the Book of Life from eternity.

And the woman fled into the wilderness, where she had a place prepared by God, that there they should feed her, a thousand two hundred sixty days. (Rev. 12:7)

This is the consequence in which we all have been placed by having the doors of the churches shut in our faces. As the Mystical Body of the Church, here represented as the Woman, is now denied sustenance in the city of this world, she must flee to the countryside and there worship the Lord and receive the Eucharist in secret. And that these 1260 days, which recall the prophecy of Daniel about the suspension of the public sacrifice in the Temple at Jerusalem, refer mystically to our own time regarding the suspension of the Mass: and that this crisis will last 1260 days, or 3.5 years.