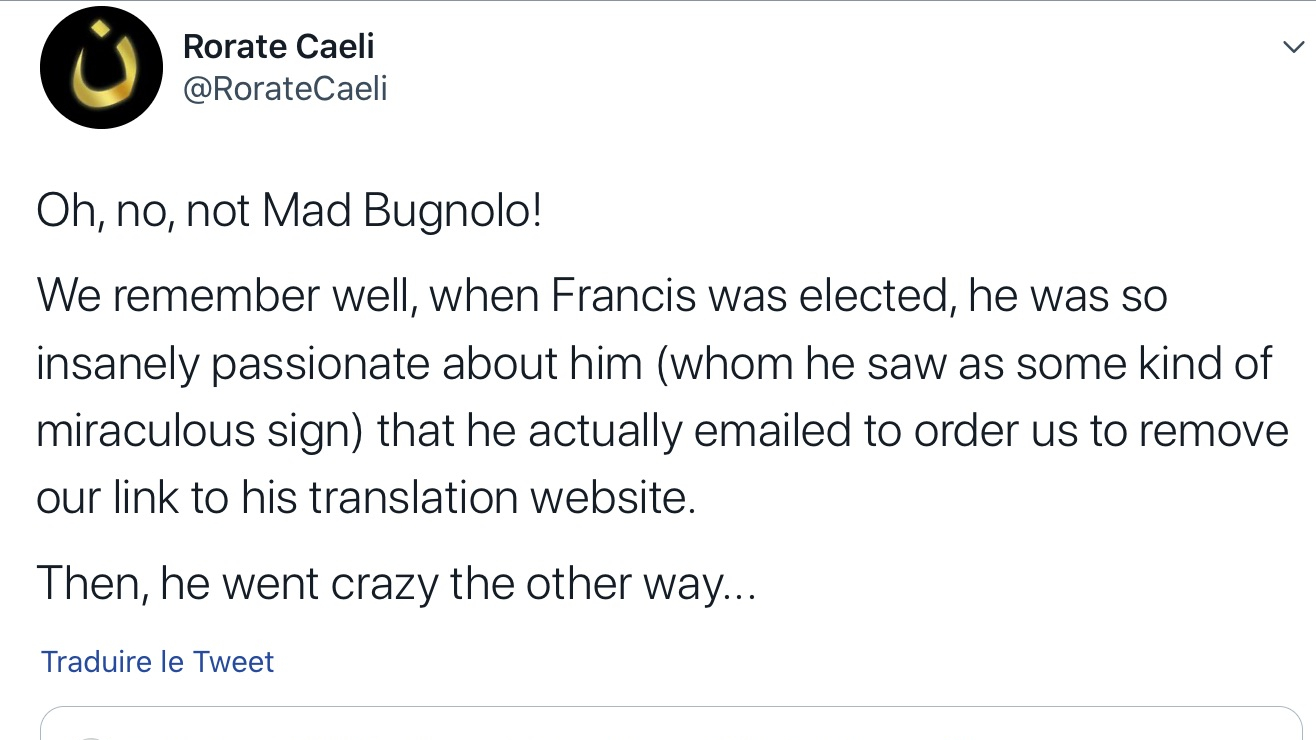 My editorial defending the historical truth of the heroic efforts of Catholic Religious and Priests during the Spanish Flu epidemic of 1918 at Philadelphia, against the misrepresentation of Father Gismondi in his op-ed at Rorate Caeli blog, seems to have provoked the most violent outburst from their twitter account operator: Since Rorate’s Twitter account has gravely impugned my mental health, I consider it necessary to give a short response.

If there is anything inaccurate in what I said in my article about the Spanish Flu in Philadelphia, please refute it!

As for why I asked by email the person responsible for the blog to remove a link to the Franciscan Archive, back when I saw that Rorate Caeli was not taking a position to defend the Faith against Bergoglio, it was because I had seen that the operator of Rorate Caeli had manipulated a lot of traditional catholics to read his blog by giving a lot of us links to our websites, thereby making it appear we endorsed him or that he was one of us. I am not sure how The Franciscan Archive ended up on his blog, but I vaguely remembered that I was asked permission for the link to be placed there.

Thus, I asked that the link be removed once I found out that the person behind the blog was a political activist of the modern conservative type, which never wants to fight the left, only go more slowly to the left. And that is the truth. But I did not say that in my email, for charity sake.

As for Bergoglio, as everyone at Rome knows, I never thought he was a holy man. I hoped he would be a good pope, that is all, because at the time I thought he was the pope. If Rorate contests this, let them produce the email. As I began From Rome in September of 2013, I challenge anyone to find any article here wherein I ever said Bergoglio was a holy man.

As for presuming a man who you think is the pope is worthy of respect, I would contest with any Catholic who says that such a presumption is unreasonable on account of the providence which protects the Papacy. And it is certainly not psychologically aberrant. What I did find strange was that Rorate Caeli had for years continually defended the theologically aberrant things said by Ratzinger but upon the election of Bergoglio immediately pounced upon everything he said. That made me realize whoever was behind Rorate he was not acting on consistent or theological principles.

As anyone who use to comment at Rorate knows, I was the strongest critic of Ratzinger’s theology and also of Pope Benedict’s writings. I think Rorate banned me several times for that. But I did so on the basis of the teaching of the Church. That is the same basis I critiqued Bergoglio, because that is the only basis I critique the theological statements of anyone. I am consistent on that.

In the mean time, to the Twitter Account operator, I say: Act like a man and refute my article if it can be refuted, otherwise, have the integrity to admit that your blog published an op-ed which misrepresented the history of the Church of Philadelphia.

As for the readers of Rorate Caeli, I think this incident shows how worthwhile it is reading anything at that blog. In my opinion it never was an authentic Traditional Catholic site.  It pretended to be such like so many others, such as One Peter Five. I have been on the net since 1993, so I have seen a lot of newbies and their tricks. I am old enough to be tired of these posers, to tell you openly who they are.

6 thoughts on “Responding to public calumny”