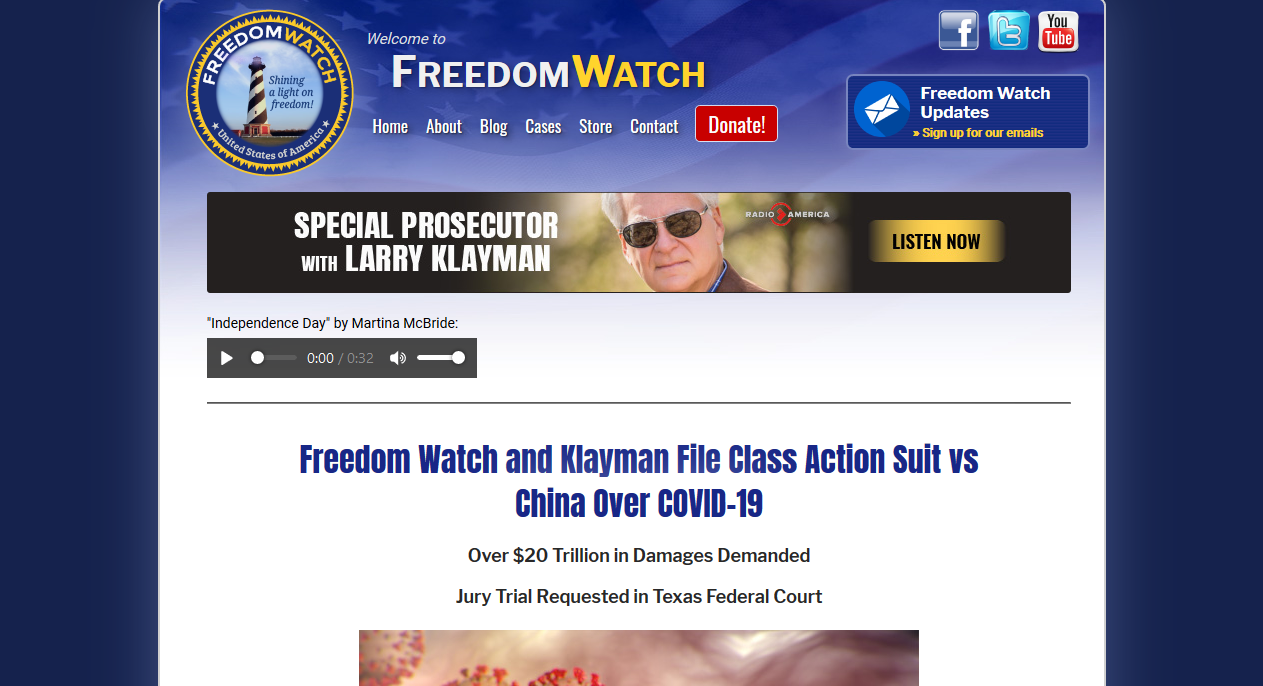 Larry Clayman of Freedom Watch has flied in U.S. Federal Court, Norther District of Texas, a class action lawsuit against China for $20,000,000,000,000 dollars, that, is 20 Trillion, or 20 million millions. The sum is so great it is roughly equal to the entire gross domestic product of China.

Larry Clayman is the famous attorney, formerly of Judicial Watch, who was the first in U.S. Judicial history to obtain a court ruling of fact that a sitting U.S. President (Bill Clinton) had committed a crime.

The basis of the lawsuit is that China violated the 1929 treaty against the development of bio-weapons, a treaty to which China legally pledged itself in 1984, and by doing so is legally responsible for the deaths of thousands and the economic damage of billions of individuals. The lawsuit describes in 24 pages, the legal complaint thus:

1. This is a complaint for damages and equitable relief arising out of the creation and release, accidental or otherwise, of a variation of coronavirus known as COVID-19 by the People’s Republic of China and its agencies and officials as a biological weapon in violation of China’s agreements under international treaties,1 and recklessly or otherwise allowing its release from the Wuhan Institute of Virology into the city of Wuhan, China, in Hubei Province, by among other acts failing to prevent the Institute’s personnel from becoming infected with the bioweapon and carrying it into the surrounding community and proliferation into the United States.

2. Since biological weapons have been outlawed since at least 1925, including by China’s membership in treaties, these illegal weapons constitute and are in effect terrorist-related weapons of mass destruction of population centers.
3. This is a civil action on behalf of the lead Plaintiffs and other members of the class comprised of sub-classes identified herein of those directly injured by the spread of COVID-19.

For those not familiar with U.S. Law, this lawsuit is a civil case seeking damages. It seeks to be accepted by the Court as as class-action suit, whereby anyone who has suffered damage or harm from the Coronavirus can join in and participate in the action and share in the final judgement against China. The website of Freedom Watch contains the legal filings and an online form for those to sign up. Both corporations, individuals and their heirs or executors can join in the action. You do not have to be a U.S. Citizen to join in this action.

Freedom Watch is the only political interest group that speaks through actions, rather than just words. We are dedicated to not only preserving freedom, but redefining its meaning, from protecting our rights to privacy, free speech, civil liberties, and freedom from foreign oil and crooked business, labor and government officials, to protecting our national sovereignty against the incompetent, terrorist state-controlled United Nations, and reestablishing the rule of law in what has become a very corrupt American legal system, where justice is only as good as your lawyer and judge—most of whom are compromised ethically and otherwise.

CREDITS: The Featured Image is a screenshot of the Freedom Watch website, and is used here in accord with fair use standards for editorial commentary.