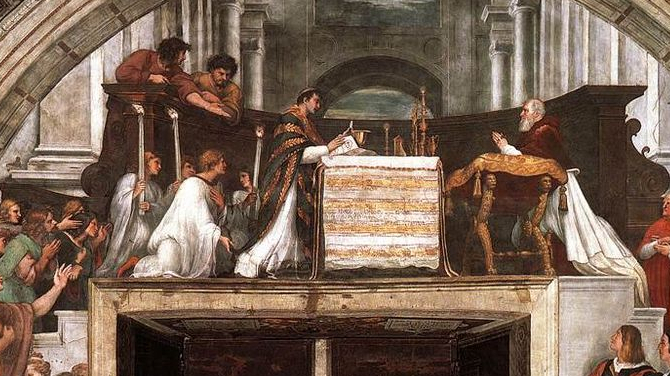 The former reads verbatim: “The State and the Catholic Church are, each in its own order, independent and sovereign. Their relations are regulated by the Lateran Pacts” (Art. 7).

The latter, in the 1984 revision, states: “The Italian Republic recognizes the full freedom of the Catholic Church to carry out its pastoral, educational and charitable mission of evangelization and sanctification. In particular, the Church is guaranteed the freedom to organize, to exercise public worship, to exercise the Magisterium and spiritual ministry and to exercise jurisdiction in ecclesiastical matters” (Art. 2, paragraph 1).

Furthermore, Canon 1213 of the Code of Canon Law specifies: “In sacred places the ecclesiastical authority freely exercises its powers and offices“. This said, if an exceptional situation really requires a momentary suspension of these prerogatives, it is necessary that it be sanctioned by public agreement between the Holy See and the Italian State, failing which the clergy and faithful cannot be required, by simple communiqués, to renounce the exercise of their sacred rights and duties.

Moreover, the Italian Episcopal Conference, accepting the government provisions without any objection, has ordered the suspension of all public celebrations and the closure of all places of worship. In doing so, it gave an order directly contrary to divine law.

Indeed, the First Commandment imposes to render to God the worship that is due to Him, a worship that, by its very nature, is public. The Sacrifice of the Mass is the highest and most effective act of Catholic worship, the only one that fully meets the requirements of the commandment. The celebration of Mass without the people, although improperly called private, has at its root a public character, yet it does not adequately manifest it. The suspension of Masses on public holidays, moreover, prevents the faithful from fulfilling the Third Commandment, which they are obliged to observe under pain of mortal sin, unless they are prevented from doing so by causes beyond their control (as in this case, which is, however, a paradoxical case). Nor can anyone forbid the public offering of the Holy Sacrifice, in the church where he is entitled to do so, to a priest who is not prevented by law.

Episcopal conferences have only a function of pastoral coordination (cf. CIC, can. 447) and cannot make decisions binding on the bishops in the government of their respective dioceses, except under certain conditions:

“The Episcopal Conference can issue general decrees only in those matters in which universal law has decreed it, or establish a special mandate of the Apostolic See, either motu proprio or at the request of the Conference itself. For the decrees referred to in § 1 to be validly issued, they must be expressed in the plenary meeting by at least two-thirds of the votes of the Presuli who belong to the Conference by deliberative vote and do not obtain binding force unless they are legitimately promulgated, after having been authorized by the Apostolic See. […] In cases in which neither universal law nor a special mandate of the Apostolic See has granted the Episcopal Conference the power referred to in § 1, the competence of each individual diocesan Bishop remains intact and the Episcopal Conference or its president cannot act validly in the name of all the Bishops unless all and individual Bishops have given their consent“ (CIC, can. 455, §§ 1-2.4; italics is mine).

Communion on the tongue, moreover, is a right of the faithful guaranteed by the universal law of the Church. Bishops, even though they are the moderators of the liturgy within the territory of their diocese, do not have the faculty to legislate in a manner contrary to the norms established by the Holy See. Therefore the obligation to receive the Eucharist on the hand is illegitimate and constitutes an abuse of power.

The risk of contagion, however, is higher with the reception in the hand, since the priest is obliged to wash his hands before Mass, while the hands of the faithful have come into contact with every kind of surface. If it is feared that the contagion is transmitted by contact with the tongue of the communicant, it is sufficient that the sacred minister be careful not to touch it! In order to avoid protests from the other faithful, those who wish to receive Communion on their tongue may receive it last by placing themselves at the back of the queue. No priest, then, can deny Communion to anyone who requests it with the proper dispositions and is not prevented from doing so by law; if he does so only because of the way in which the faithful want to receive it, he commits a very serious abuse, especially if, at the same time, he grants it to people who absolutely cannot access it because they are in a state of notorious mortal sin.

Since it is not known at all whether each and every Bishop of the Italian Bishops’ Conference has given his consent to the decision to close churches and to suspend worship (even admitting that they have the faculty to do so), priests and faithful are not bound to obedience and retain full freedom to regulate themselves according to their conscience with respect to the latest provisions of the C.E.I., protesting with all lawful means against this unprecedented abuse of power.

Obedience to Pastors, however dutiful it may be, cannot be contrary to the law, whether divine or ecclesiastical, nor deprive the faithful of their rights, to the detriment of their spiritual good.

On the contrary, Pastors have a grave obligation to do everything in their power to ensure the necessary assistance to the faithful by preaching, governing and administering the Sacraments, even – if necessary – at the risk of their lives. To fail in this duty is a grave omission, which in the case of full warning and deliberate consent constitutes a mortal sin.

Therefore, to call Pastors to their duties of state is also an act of charity towards them, as well as a right of every believer. If we then consider that the offering of the Holy Sacrifice is the most powerful means of making God propitious and obtaining His help, we must follow the example of the Polish bishops and multiply the Masses rather than suspend them. In case of public calamity, in Christian history, divine mercy has always been implored.

CREDITS: The Essay is reprinted in English translation with permission of the author. The original in Italian can be found here. The Featured Image is, The Mass of Bolsenna, by Raffaele.