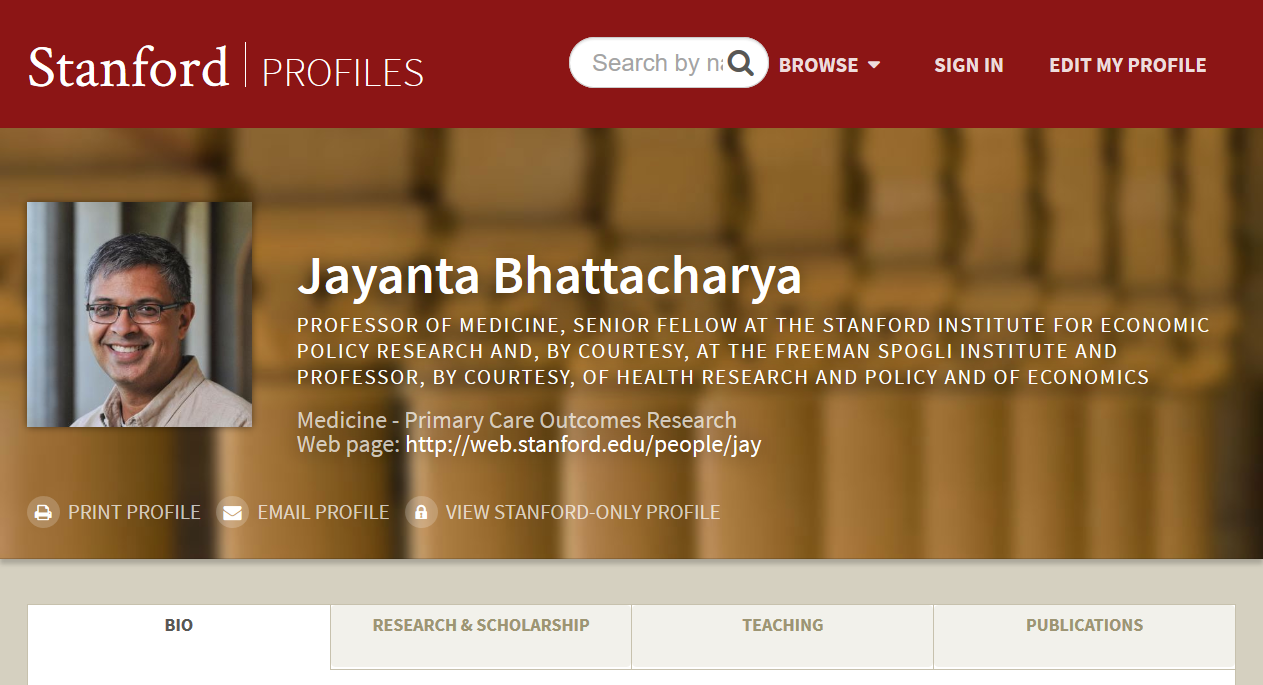 Numerous medical experts are speaking out in recent days against the Corona Hype: the induced panic over the Wuhan Virus which is being promoted by the main stream media and entities controlled or funded by the Bill and Melinda Gates Foundation: a hype which has caused the civilized word “to go mad”, according to Alexander Lukashenko, President of Belarus (the Former Soviet State of Beloyrussia).

The latest experts to sound the alarm against the over-reaction are Doctors Eran Bendavid and Jayanta Bhattacharya of the prestigious Stanford University, in the United States of America. And they have impressive credentials to speak:

Dr. Bendavid, M.D., is an Associate Professor of Medicine – Primary Care and Population Health, a Senior Fellow at Standford’s Woods Institute for the Environment, a Member of the Maternal and Child Health Research Institute and a Fellow at The Center for Innovation and Global Health.

Dr. Bhattacharya, M. D., who also holds a Ph. D. in Economics, is a Professor of Medicine – Primary Care Outcomes Research, a Senior Fellow at Stanford’s Institute for Economic Policy Research, currently the Director for Standford’s Center for the Demography and Economics of Health and Aging, and an Associate in the National Center for Economics Research.

Drs. Bendavid and Bhattacharya, in their editorial to the Wall Street Journal, of March, 24, 2020, write:

If it’s true that the novel coronavirus would kill millions without shelter-in-place orders and quarantines, then the extraordinary measures being carried out in cities and states around the country are surely justified, … But, there’s little evidence to confirm that premise — and projections of the death toll could plausibly be orders of magnitude too high.

Fear of Covid-19 is based on its high estimated case fatality rate — 2% to 4% of people with confirmed Covid-19 have died, according to the World Health Organization and others, … So if 100 million Americans ultimately get the disease, 2 million to 4 million could die. We believe that estimate is deeply flawed. The true fatality rate is the portion of those infected who die, not the deaths from identified positive cases.

Existing evidence suggests that the virus is highly transmissible and that the number of infections doubles roughly every three days. An epidemic seed on Jan. 1 implies that by March 9 about six million people in the U.S. would have been infected. As of March 23, according to the Centers for Disease Control and Prevention, there were 499 Covid-19 deaths in the U.S. If our surmise of six million cases is accurate, that’s a mortality rate of 0.01%, assuming a two week lag between infection and death. This is one-tenth of the flu mortality rate of 0.1%. Such a low death rate would be cause for optimism.

Meanwhile the Italian Ministry of Health is contributing to world panic by knowingly misrepresenting the number of deaths in Italy by counting all those who had coronavirus who died, as victims of the disease, while admitting that only 12% have death certificates which say they died of coronavirus. Furthermore, only 0.2% who are counted as victims had no known pathologies before being admitted to the Hospital.

FromRome.Info has been publishing a series of reports since mid-March exposing the misrepresentation of statistics in regard to the Wuhan Virus and who is behind engineering the panic. See a list of our reports, here.

CREDITS: The Featured Image is a screenshot of the Profile page at Stanford University for Dr. Bhattacharya, and is used here in accord with fair use standards for editorial commentary.

3 thoughts on “Standford Medical Experts: COVID-19 may be less than 1/10 as lethal as the winter flu”