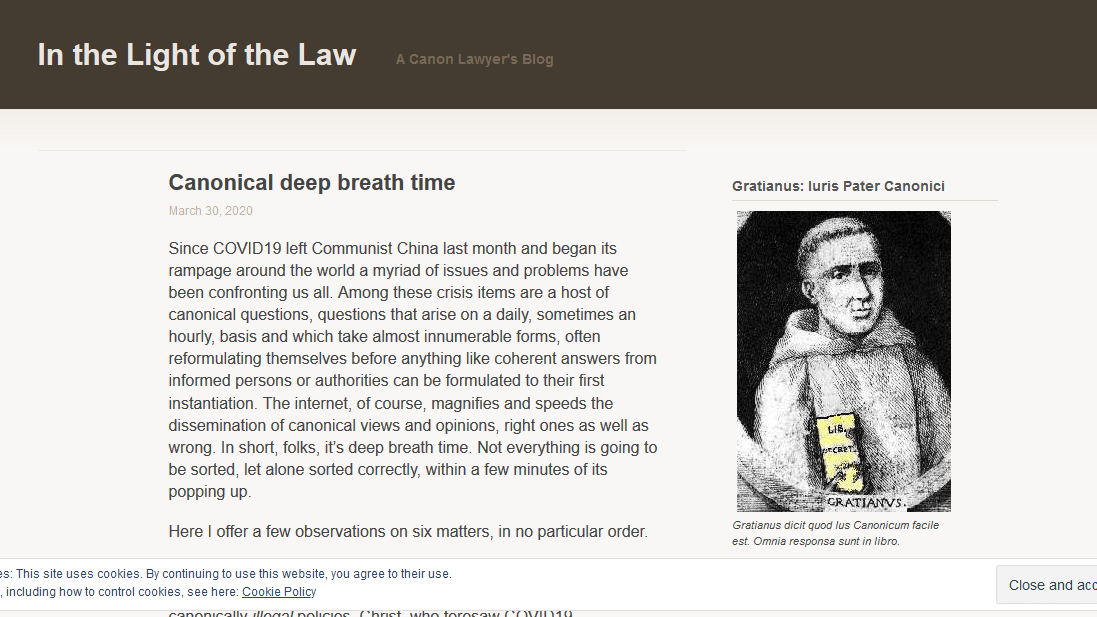 The Big Lie becomes the premise which the small minded will never question, and what his mind consequently thinks or judges on that basis will be utterly corrupted.

A case in point is Canon Peter’s opinions on Sacraments during the Corona Panic, as expressed in his post entitled, Canonical deep breath time. Canon Peter’s accepts all 3 Big Lies which I recently listed: that the Church in conforming Her pastoral practice to modern times does not risk damaging the traditio fidei, that Pope Benedict in renouncing the ministerium renounced the office of the  papacy, and that the Coronavirus is 340 times more deadly than the common cold.

I bluster in words, of course. Because the problem is much worse than a 340x reduction.

Because when you accept any false premise, all your conclusions are 100% false.

So now I will address Canon Peter’s false conclusions and show what the truth is:

1. Do not assume that some wrong, even stupid, policies being announced by various levels of Church government are necessarily canonically illegal policies. Christ, who foresaw COVID19, nevertheless gave considerable authority to his Church, specifically to his bishops and popes, to formulate how the Church would carry on his mission in these days. People should be very wary of concluding that a given a local Church policy is canonically illegal and can therefore simply be disregarded.

Here is your classical positivist. Throw the book of the Gospels in the trash, shut up, and presume like a good Catholic under the Nazi regime of Adolf Hitler than your local Fuhrer is probably acting lawfully. Don’t even dare think that other considerations make that presumption invalid!  — But that is not Catholicism. That is clericalism.

Catholicism is this: the Faith trumps obedience to a visible superior, so when a Bishop dumps the Gospel in the trashcan and acts contrary to the Gospel, the presumption that he is acting legally can be dumped likewise in the trashcan!

Consider, e.g., that for most of Church history the institution of “territorial interdict”, whereby Church authority could shut down access to sacraments for the innocent as well as the guilty in whole countries, was practiced. See most recently 1917 CIC 2268-2277. There were, of course, efforts over the centuries to mitigate the impact of territorial interdicts on the innocent but, in its heyday, though criticized on prudential grounds, interdicts were not attacked as illegal in themselves nor as somehow outside of the Church’s authority to implement. Today, what amounts to territorial interdicts are being imposed (rightly or wrongly, in terms of medical advice) as a way to protect the innocent. Even if such policies are wrong-headed (as some seem to me) that does not necessarily mean they are canonically illegal.

What Canon Peters fails to mention, is that like every canonical penalty, interdicts have to be motivated by some injustice.  That a prince rebels against the Church did merit an interdict against his principality! But that the faithful in what they perceive to be a life-and-death situation want to receive the Sacraments is not an injustice! Nay, it is their divine right! When any penalty is not motivated by injustice, then it is invalidly imposed per se and ipso iure. So there is no question at all that it is legal.

Canon Peter also fails to explain to you, quite conveniently, that an interdict loosed you form all bonds of obedience to your Prince so that you could and should disobey him! But what the Bishops are doing is punishing an entire territory for the fault of no one, and demanding you continue to obey your unjust leaders! This is the complete opposite moral and legal case!

Thus it is a complete and diabolical shell game, Canon Peter’s is playing here. And that is also clericalism of the most depraved kind: to justify the denial of sacraments to 100s of millions of Catholics!

Then Canon Peter’s goes off the deep end, saying:

2. The use of communication devices (e.g., cell-phones, video devices) in sacramental Confession has been an interest of mine for some time and I published a peer-reviewed series of three articles exploring the validity and liceity of such practices.* While I far prefer such matters to be debated in the calm of academe some points apparently need to be made now. …

I won’t quote the theological dribble which follows under n. 2. But suffice it to say that Canon Peters does not know the first thing about Sacramental theology, which requires that for a Sacrament to be valid that it be a sign which is communicated. And here ”’communicated” is the Latin word for shared among persons in the presence of one another. The notion of communication via wires and radio waves etc., that is remotely, is an analogy, it is not the reality of communion. The voice you hear on the TV or cellphone is NOT the voice of a human being, it is the semblance of the voice created by merely inanimate instruments which cannot in the sacramental sense produce an act of personal communion. Remote communication is only the sharing of information, it cannot be or produce the real communion of persons. We are men, after all, not Angels, communion for human beings requires physical proximity of human bodies.

But since the truth is that Pope Benedict XVI has not ordered any Bishop to suspend the Sacraments or close the Churches, and since Coronavirus is not even as deadly as the winter flu to healthy persons, there is absolutely no reason for Canon Peters to try to start figuring out how to solve the problems which result from accept the Big Lies opposed to those 2 truths.

Here we have the classic example of the Pharisee. Straining gnats but swallowing camels. That is, straining canonical problems but ignoring the Big Truths that Benedict is still the pope and that all medical statistics show the Wuhan virus is not a plague.