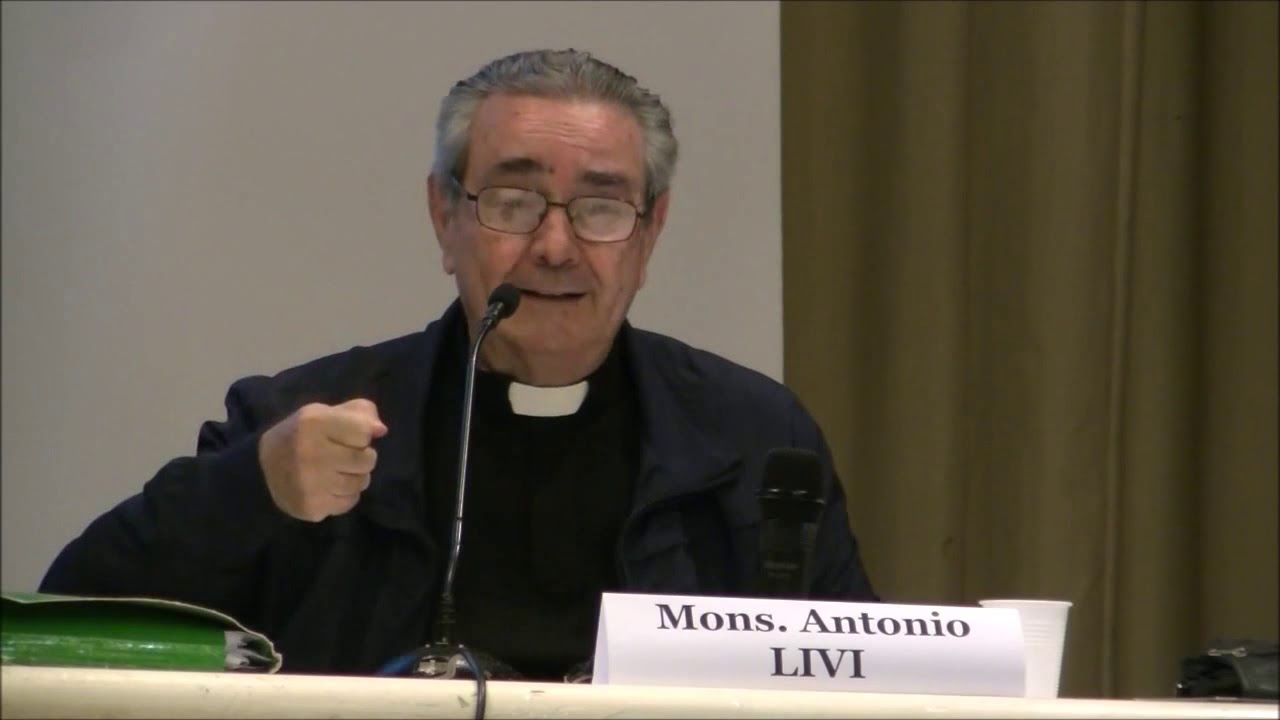 It was announced yesterday evening that Monsignor Antonio Livi had passed away. He had been diagnosed with cerebral cancer in the fall of 2018. I never personally met Mons. Livi, but we had corresponded, and before his illness was diagnosed he expressed to me his desire to be on the Faculty of the Scholasticum, which was a great honor for the rest of the institute.

Since, he has passed, I can now reveal, that to me in October, 2018, he expressed agreement that Pope Benedict XVI had not validly resigned, because of substantial error in the act of resignation.

So for this reason, I feel an obligation to let the world know something about this great theologian and priest of the Diocese of Rome, on which account I publish here, Google’s English translation of the Italian Wikipedia article on Father Antonio Livi:

A pupil of Étienne Gilson , he collaborated with Cornelio Fabro , Augusto Del Noce and Evandro Agazzi ; he is the initiator of the philosophical school of common sense , represented by the ISCA ( International Science and Commonsense Association ), which has the journal “Sensus communis – International Yearbook of Alethic Logic” as its official body. Among his numerous disciples or admirers are the Italians Fabrizio Renzi (author of important essays on the History of Metaphysics), Gianfranco Bettetini (semiologist), Fortunato Tito Arecchi (physicist), Alberto Spatola (psychiatrist), Giovanni Covino (professor of Philosophy) Valentina Pelliccia (History of Logic scholar) and Francesco Arzillo (Expert in Philosophy of Law), Spaniard José Meseguer (Expert in Logic and Artificial Intelligence), American Philip Larrey (scholar of analytical philosophy ), English Thomas Rego (specialist in studies on Aristotle ), the Polish Ireneusz Wojciech Korzeniowski (scholar of Hermeneutics) and the Irish William Slattery (epistemologist).

” Common sense ” is the term used by Livi in ​​an anti-Cartesian key to identify the natural and incontrovertible certainties possessed by every man. It is not a faculty or a priori cognitive structures but an organic system of universal and necessary certainties that derive from immediate experience and are the condition for the possibility of any further certainty. Livi first clarified what these certainties are and tried with the assumption method that they are in fact the foundation of human knowledge. Common sense therefore includes evidence of the existence of the world as a set of entities in movement; the evidence of the ego, as a subject that is perceived in the act of knowing the world; the evidence of others as their own kind; the evidence of a moral law that regulates the relationships of freedom and responsibility between the subjects; the evidence of God as the rational foundation of reality , the first cause and ultimate end, known in its unquestionable existence thanks to an immediate and spontaneous inference, which however leaves the mystery of its essence unattainable, which is Transcendence in the proper sense. These certainties are the basis of a holistic-based system of aletic logic.

Among the recent studies on the system of aletic logic developed by Antonio Livi we can mention the essays by Evandro Agazzi (“Values ​​and limits of common sense”, Franco Angeli, Milan 2004), Pier Paolo Ottonello (“Livi”, in “Profili”, Marsilio Editori, Venice 2011), by Piero Vassallo (“Antonio Livi, the rehabilitation of common sense”, in “Memory and progress”, Faith & Culture, Verona 2009, pp. 135-140), by Francesco Arzillo, The foundation of the judgement. A theoretical proposal starting from the philosophy of common sense by Antonio Livi (Leonardo da Vinci Publishing House, Rome 2011), by Fabrizio Renzi, The aletic logic and its critical function. Analysis of the new theoretical proposal by Antonio Livi (Leonardo da Vinci publishing house, Rome 2012) and William Slattery, The Logic of Truth. Thomas Aquinas’ Epistemology and Antonio Livi’s Alethic Logic (Leonardo da Vinci Publishing House, Rome 2015). Matteo Andolfo (historian of ancient Philosophy), Dario Sacchi (philosopher of the Catholic University of Milan), Georges Cottier (Theologian of the Pontifical House), Rino Fisichella (magnificent rector of the Lateran University), Eudaldo Forment (philosopher of the ‘University of Barcelona), Umberto Galeazzi (professor of Philosophy at the University of Chieti), Mario Pangallo (professor of History of Philosophy at the Gregorian University) and Vittorio Possenti (moral philosopher of the University of Venice).

From Gilson, Fabro and Agazzi he learned to deal with the essential problems of metaphysical speculation in dialogue with great thinkers of antiquity (Plato, Aristotle, the Stoics, Agostino), the Middle Ages (Anselmo, Tommaso, Duns Scotus) and the modern age (Vico, Kierkegaard, Rosmini). Convinced supporter of the realistic method of interpreting experience, Livi defended its reasons by systematically using the dialectical tools offered by the thinkers of the analytical school, from Ludwig Wittgenstein to Barry Smith. His most intransigent critics were, on the one hand, the neo-idealist Emanuele Severino, and on the other, the head of the “weak thought”, Gianni Vattimo.