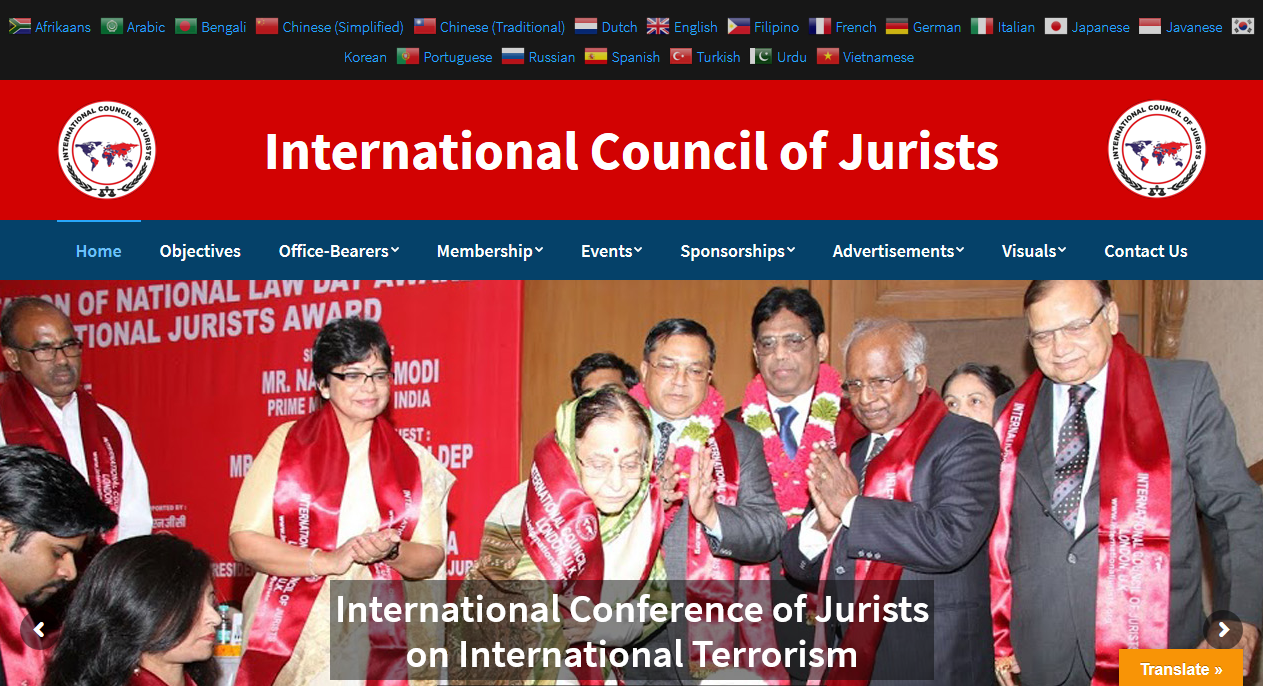 Dr. Adish C. Aggarwala, President of the International Council of Jurists (London) and Chairman of the All India Bar Association has filed a human rights complaint with the Human Rights Council, of the United Nations, at Geneva, Switzerland, against the People’s Republic of China, the Chinese Military and the Wuhan Institute of Virology, for their responsibility in creating, deploying, dispersing and failure to stop the spread of the Wuhan Virus, aka, COVID-19 in China and throughout the world.

This legal filing follows the action by Freedom Watch in filing a Federal lawsuit in the United States of America against China over civil damages resulting from the Wuhan virus, and which seeks 20 Trillion Dollars USD in damages.

The International Council of Jurists is an international professional association headquartered at 134, Buckingham Palace Road, London (UK), and whose Secretary General is Ahmed Faiz. Their website, of which the Featured Image used in this article is as screen shot, is found at http://internationaljurists.org/(the link at Wikipedia is incorrect).

The All India Bar Association (website: https://allindiabarassociation.com/) is an Association of Lawyers, headquartered in Dampier Nagar, Mathura, India.

Dr. Aggarwala, the President of the former and Chairman of the latter, has filed a 27 page legal brief which details every failure of responsibility and complicity in the violation of numerous international accords and agreements.

I will quote here, only one section, that which regards the fifth allegation, which begins on p. 24, that COVID-19 is an Act of Biological warfare against humanity. What follows is a direct quotation from the legal brief:

5. COVID-19 is a Bio-Weapon created in Wuhan

The Chinese government has meticulously planned the execution and spread of the Novel Coronavirus and the same can be inferred in the way China has taken regard of the situation as also of the curious case of the spread of the virus all over the world. As pointed earlier, it remains a mystery as to how the virus has not spread in all provinces of China but at the same time, has spread to all countries in the world.

According to an ET Prime Report, a group of Chinese scientists in Canada were accused of spying and were stripped of their access to Canada‟s National Microbiology Lab, sometime in August 2019 and the said lab is known to contain some of the world‟s deadliest pathogens. These scientists then were sent to a High security biochemical Wuhan Lab, which is one of the world‟s most heavily guarded labs. That these scientists later developed the COVID-19 virus and released it to the outside world somewhere in the early days of December 2019 in Wuhan, from where the virus spread. (as reported in the Economic Times article (dated February 11, 2020):

The purpose of developing such a potent and deadly virus remains a secret. However, there are solid evidences to show that the Chinese government intends to utilize the same to take control of the world‟s economy.The hypothesis of biological warfare behind the global pandemic had already been raised by Russian experts some weeks ago.

Like any opinion that is slightly different from the official version of Western governments and their media agencies, the thesis was ridiculed and accused of being a “conspiracy theory”. However, as soon as the official spokesman for the Ministry of Foreign Affairs of the second largest economic power on the planet publishes a note attesting to this possibility, it leaves the sphere of “conspiracy theories” to enter the scene
of public opinion and official government versions.

In addition to making the explanation of biological warfare official, Zhao Lijian raised important questions about the pandemic data in the USA: “When did patient zero begin in US? How many people are infected? What are the names of the hospitals? It might be US army who brought the epidemic to Wuhan. Be transparent! Make public your data! US owe us an explanation!”

The supreme leader of the Islamic Republic of Iran, Ayatollah Khomeini, ordered on the same day of the declaration of the Chinese Ministry the creation of a unified center of scientific research specialized in the fight against the Coronavirus. The motivation, according to the Iranian spiritual and political leader, was motivated by evidence that the pandemic is a biological attack. These are his words:

“The establishment of a headquarters to fight the outbreak [of COVID-19] occurs due to the presence of evidence that indicates the possibility of a biological attack, signaling that it is necessary that all coping services [to the coronavirus] be under the command of a unified headquarters”.

These speculations only increase the likelihood of the COIVD-19 being a carefully assembled biological weapon, aimed at crippling major countries in the world leaving only China as the beneficiary.