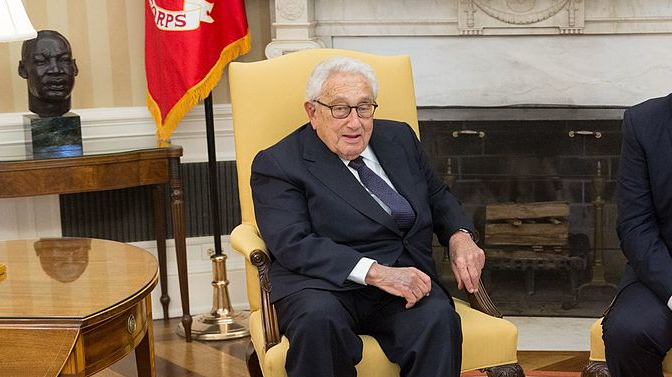 Henry Kissinger, former Secretary of State and National Security adviser under U.S. Presidents Nixon and Ford, has called for a new world order, to respond to COVID-19.

Writing in an op-ed piece in the Wall Street Journal (link here for subscribers to the WSJ), he says:

“Addressing the necessities of the moment must ultimately be coupled with a global collaborative vision and program.

Helen Buyniski, writing for Russia Today, says in her article entitled, Kissinger says ‘even US’ can’t defeat COVID-19 alone. His solution? Global NWO government of course of his editorial:

Kissinger laments that the pandemic has led to the return of a “walled city” model of nationalist governance, suggesting that “exploration at the frontiers of science” alone can save humanity from disease in his vision of a globalist utopia. But developing cures takes time, and the notion that countries should be discouraged from protecting themselves in the interim is suicidal. If anything, one of the reasons Italy, Spain, and France were hit so hard by coronavirus was the EU’s dysfunctional insistence on open borders amid the pandemic.

“Global trade and movement of people” are all well and good, but the pandemic has exposed the weaknesses of the globalist system like never before. It will take years for nations to rebuild, and repeating their mistakes is not something they can afford to do.

“While the assault on human health will – hopefully – be temporary, the political and economic upheaval it has unleashed could last for generations,” he elaborated, adding that the liberal world order can be put at risk. “The pandemic has prompted an anachronism, a revival of the walled city in an age when prosperity depends on global trade and movement of people.” He went on to emphasize that the United States should lead the effort to safeguard Enlightenment values.

Kissinger is a frequent participant in the Bilderberg annual meetings, meetings at which I speculate the plan to launch COVID-19 to push their agenda of one world government were hatched and planned. Bill Gates, the leading personality behind all aspects of the Corona Stunt, Corona Hype and Corona Control is also a Bilderberger. Bilderbergers are also pushing the Corona Panic by all means possible.

Henry Kissinger is of German Jewish extraction, and served in the US Military in the Second World War during the Battle of the Bulge, aka the Ardennes Offensive in 1944.

CREDITS: The Featured Image is a detail of a photo of Henry Kissinger during his visit to President Donald Trump at the White House. Photo is by official White House photographer Shealah Craighead, and is thus in the public domain.

7 thoughts on “Kissinger: After COVID-19 we need a New World Order”