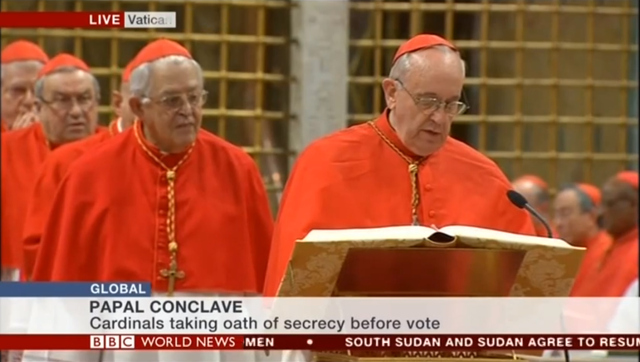 But to add to their solidarity in his perdition, now they have added a new article to their Bergogio no-matter-what dogma: it is this, Bergoglio is the pope even if he no longer claims to be the pope!

The latest example of this is essay by Dr. Roberto De Mattei, entitled, Una Pasqua che rimarrà nella Storia, published by Corrispondenza Romana — a strangely named website, because, as everyone knows, Correspondence Committees are agitation groups for Marxists’ International.

But Rorate Caeli Blog, always ready to run to support Bergoglio’s claim, has published an English translation, entitled, De Mattei: An Easter that will go down in history.

I will quote from the English translation for the sake of the readers of FromRome.Info.

Here is the opening dogmatic statement:

Benedict XVI juridically renounced the Petrine Mandate, without explaining the legitimate moral motives that might shed light on his extreme act. Pope Francis, for his part, juridically conserves this mandate, but doesn’t exercise it and even seems to want to strip himself of the highest title he holds, that as Vicar of Christ, transcribed, in the latest edition of the Pontifical Yearbook, as a historical title, and not constitutive. If Benedict XVI renounced the juridical exercise of the Vicariate of Christ, it almost seems that Pope Francis has renounced the moral exercise of his mission. The suspension of religious ceremonies all over the world, afflicted by the Coronavirus, seems to be a symbolic, but real, expression of an unprecedented situation, in which Divine Providence has taken away from the Pastors – the very people they abandoned.

De Mattei, who has publicly demonstrated that he neither knows Canon Law or gives a care about it on two occasions, and who refuses to correct his notorious errors, now is insistent. Notice how many times he uses the word juridically!

But he cannot say that, because if he did, someone might ask him, “According to the norm of what law or canon?” And he could not answer, because it is obvious that Pope Benedict XVI in renouncing the “ministry which was committed to me through the hands of the Cardinals” did not renounce “his munus” as Roman Pontiff as Canon 332 §2 requires. And thus, it is also obvious that Bergoglio was not elected according to the norm of canon 359, which requires first that a Pope die or resign canonically, before a Conclave can be convened.

There is another grave error in De Mattei’s script. He says that a pope renounces the Petrine Mandate. The mandatum petrinum is a technical theological term for the command whereby Christ Jesus conferred the munus upon Peter, saying, “I give to thee the keys of the Kingdom of Heaven, whatsover you bind …”.

The petrine munus of the Successors of Saint Peter, is the same munus as Saint Peter. But Christ commanded Saint Peter, and Peter received the munus which flows from that mandate. But Christ does not give a mandate individually to any Successor of St. Peter. That is completely ridiculous. The Pope is not Peter reincarnate, resurrected or cloned! Nor does the authority of each pope exist independently as something equal or alongside that of Saint Peter! But Bergoglio evidently believes this, and it appears his followers are accepting this error too.

To imply that a pope renounces his mandate is to introduce, theologically, that the pope has received a written or spoken command to serve as the Vicar of Christ, from someone on earth. This is just where Bergoglio is also headed, in the religion of the New World Order. This will all fit neatly into the doctrines of the Church of the Antichrist. So neatly, that it seems prepared in advance.

Perhaps I need not mention that the person Dr. de Mattei loves quoting, Plinio Corrêa de Oliveira, at the end of his life claimed that his own mother was incarnation of Our Lady, the Immaculate Conception. Indeed, prominent scholars have informed me that the movement he founded is fundamentally pantheistic, in that it believes that everyone can become God by some sort of secret gnostic doctrine and practice. You can see that reflected in De Mattei’s essay, where he speaks of vacuums, absorbing, etc., and saying that a pope has a mandate.

Naming your flagship publication here at Rome, Corrispondenza Romana, emphasizes that, because by it you imply that Rome is not the center of the Catholic world, and that your publication belongs to some other organization.