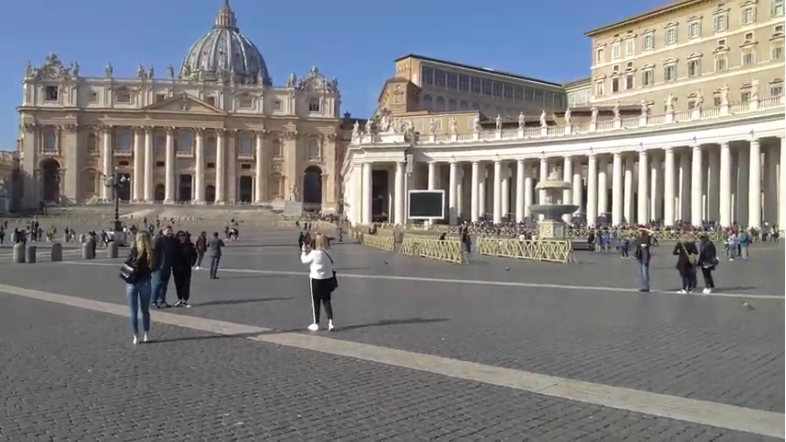 You reap what you sow. It’s an ancient addage and Saint Paul says it applies to our merit or lack of merit in this life, though it is also valid in all areas of human life: every action has its consequences: good actions, good consequences; evil actions, evil consequences.

While, the Revolutionaries which seized control of the Vatican in March 2013, after the putsch of Feb. 11, 2013, are doing everything they can to deceive Catholics away from the flock of Jesus Christ, nevertheless, try as they may, they cannot escape the consequences of their actions, even if they do not fear the consequences of Divine Justice which are approaching more rapidly every day.

Bergoglio’s embrace of the call of Bill Gates to shut down society so as to create the most panic and control possible, so as to prepare a new world order in which the masses are controlled like livestock, the Catholic Religion is reclassified as unhealthy and severely or totally outlawed, and no one can communicate with anyone except through State controlled or monitored social media, is a socialist dream come true. And since socialists love their dream world more than reality, they have no intention of leaving it.

However, Mammon still rules the real world. And the dearth of financial income is a demon which can bite even the most godless in a way they can feel it.

The Vatican has been bit by such a crisis. Finances are in a death-spiral. The agreement by Bergoglio to shut down the Church in Italy has totally eliminated all revenue for the Catholic Church in Italy and at the Vatican which is derived from the faithful attending Church and going on pilgrimages or visiting ecclesiastical museums.

At the Vatican, in a good year, the Vatican Museums alone bring in 80 million Euro. Since their closure on March 9, by Bergoglio’s order, they have failed to bring in the normally expected 11 million during this time of the year. But even those statistics are probably too kind, since on account of the utter revulsion most devout Catholics have for Bergoglio the number of pilgrims to the Vatican has been declining in recent years.

In response, the Cardinal President of the Governorate of the Vatican has ordered dire restrictions on all expenditures.  The entire public calendar of events for religious ceremonies, conferences, exhibitions, meetings, etc., has been cancelled for the whole of 2020 A.D.. All departments of the Curia and offices at the Vatican have been instructed to limit to all extent possible any expenses. Paid vacations and travel are to be cancelled.

The humorous but true incident some weeks ago, of  Bergoglio being trapped in an elevator, was a direct result of the cutback on elevator maintenance staff. The anti-pope did not escape until the Vatican Firemen liberated him. Alas it was an occasion for meditation which did not seem to have any spiritual effect.

The requests from the faithful throughout Italy to reopen the Churches has been universal and truly moving. Even at FromRome.Info we are receiving inquiries from Catholics round the nation and some party leaders asking if we know of any priests who celebrate the Mass for the faithful and with the faithful, while maintaining the social-distancing rules of the government.

On Holy Saturday, as the Church remembers Christ in the tomb and descending to the Limbo of the Patriarchs, the Italian Senate passed a motion calling on the government to negotiate with the Italian Bishops’ Conference to reopen the Churches. The request fell on deaf ears, because on the one hand, the government is following the dictates of Bill Gates who controls the World Health Organization, and on the other, the decisions in Italy were dictated from the Vatican, which is also following the new World Dictator from Seattle.

The financial impact on the Vatican will soon have its results. The deficit for 2020 will end up  being historic.

But as Saint Paul says, you reap what you sow. Sow disbelief and godlessness and reap deficits.  Soon the unwritten rules of the Club, which is the College of Cardinals should kick in and, we might see Bergoglio forced out of power, if for nothing but to save the Club house, which is the Vatican City State, from bankruptcy.